This week I’ve had the pleasure of virtually attending the Munin Conference on Scholarly Publishing, host at UiT University of the Artic, in beautiful Tromsø. While due to Covid-19 I sadly was unable to travel there, it was still two highly enjoyable and informative days focussing on a topic that rather fills my professional life. As all conference sessions were recorded you’ll be able to follow the link above and watch them to your heart’s content.

However, most excitingly I was one of the speakers at this year’s conference, on the topic The Twin Dilemma: Successfully Operating a Scholar-Led Journal to Enable Discourse and Empower Researcher Development. The habitual Doctor Who reference in the title aside, my talk focussed on the experiences we’ve had on Exchanges in terms of our work towards special issues, and the experiences of my associate editors as per the abstract:

The presentation will explore the configuration of a long-running and successful scholar-led, diamond open-access, interdisciplinary journal Exchanges, published by the University of Warwick, which combines knowledge dissemination with contributor developmental goals. Drawing on experiential data, the presentation provides ethnographic insights into the mutually beneficial outcomes derived from recruiting post-graduate researcher ‘associate editors’ to work on the title. It also problematises the balance between potentially exploitative, collaborative editorial production within the context of necessary academic immaterial labour required to operate an interdisciplinary scholar-led title.

I’ve had some very positive feedback and one or two post-talk conversations already which might be opening some new avenues for the journal to tentatively explore. Moreover, with an audience of 150 globally for the talk, I’m hopeful it might also engender a few new submissions of work to the journal too, which would of course be absolutely fantastic.

Fingers crossed circumstances and journal developments allow me to be physically in attendance for next year’s conference!

Keeping In Touch and Engaged with Exchanges

Good morning Exchanges contributors, readers and wider community. I thought it was worth briefly highlighting the various ways you can engage with Exchanges and our team, especially given the currently complex and changing international situation. Albeit currently, we’re limited to these being all at a distance.

Firstly, and most importantly, for potential authors looking to talk over a submission, then our Editorial Board members can always be contacted for initial discussions (https://exchanges.warwick.ac.uk/about/editorialTeam). Naturally, you can come straight to myself as Chief Editor, especially if you’ve got something more unusual in mind (e.g. a potential special issue!).

Secondly, if you’re a Linked.In user, and you’re looking to bolster your personal career profile and information on publishing opportunities, then you should join our group (https://www.linkedin.com/groups/12162247/). It’s where all the key announcements from Exchanges are regularly posted, and importantly it’s a fairly low traffic group, with maybe a post a week, so you won’t be overwhelmed with information.

Undoubtably, the best way to get with the journal involved is contribute material for future issues. You’ll find our current calls on our announcement pages (https://exchanges.warwick.ac.uk/announcement). Remember, Exchanges take peer-reviewed articles but also interviews, essays and critical reflections, which while they are still subject to editorial scrutiny before acceptance can see publication faster. They’re also incredibly popular items with our diverse, global audience too, and a great way for new authors to add a publication in a quality title.

We also have a twitter feed: suitable for scholars of all disciplines & interests (http://www.twitter.com/ExchangesIAS). It’ll keep you at the forefront of news, views and opportunities at the journal. Hopefully, you already follow us, but we’re always keen for more early career and post-graduate researchers to join us. We’re stronger together, and it’s a really engaged community we’re building.

Then there’s this blog…which you’re currently reading (https://blogs.warwick.ac.uk/exchangesias/)! Every other week (and more frequently as time allows) our EIC writes about the journal and developments behind the scenes. Comments and discussion are always welcome on our open forum.

It’s worth remembering too, that Exchanges is published through our existence as part of Warwick’s Institute of Advanced Study (https://warwick.ac.uk/fac/cross_fac/ias/). This means there are many other ways to get involved with activities within the IAS and Exchanges, albeit virtually for the time being).

Finally, we’ve also introduced the opportunity to engage with the Editor-in-chief via video conferencing. So, if you talk over publishing matters, opportunities or potential future projects you’d like to work with us on, then you can still talk directly to a friendly face. Get in touch to set up an appropriate time: UK office hours Tue/Thur normally available (https://exchanges.warwick.ac.uk/about/contact) .

Stay safe, stay strong and stay in touch in these uncertain and extremely challenging times

Effective communication is at the heart of everything we do as scholars. This is was why I was delighted last week to spend three hours running a workshop entitled Effective Scholarly Communication[1] for a post-graduate researcher audience. I’m lucky, because improving my own communication has always been an intrinsic aspect of my professional life. Partly, this is because I’ve benefited from quite a varied career trajectory, having been a participative interactive storyteller since before I was a teenager[2], and in the past decade a prolific produser[3] creator of videos and podcasts. That’s before we come to my doctoral studies specialising in emerging scholarly communication practices and the few hundred articles, reviews, chapters, reports, editorials and conference papers I’ve produced during my career(s)[4]. Despite, technically, currently being an early career researcher myself, I've successfully drawn on these scholarly and performance experiences to deliver communication workshops to professionals, scholars and the public alike for many years.

Consequently, when I was invited last August to put together a session for our Research Skills Programme (RSSP)[5] here at Warwick, I felt reliably confident in attempting to create an engaging three-hour workshop in this communicative domain. Or at least I was confident, when I originally pitched the session towards the tail end of a long hot summer. Pragmatically, finding the time to redevelop and enhance some of my earlier training into a bespoke and suitably polished researcher focussed session, absorbed rather more preparation time than I initially anticipated. Given researcher training isn’t my major focus here at Warwick, understandably this was perhaps an unsurprising conclusion to have reached.

As any experienced trainer will tell you, it’s a little difficult going in cold delivering a learning event to a new community for the first time. For myself, I wasn’t 100% sure what the intended audience would want, need or desire to get out of the workshop. I knew the kinds of material I’d have welcomed during my own doctoral training journey, but as noted, I’ve the benefit of being less a more mature scholar than many PhD candidates. Ideally, it would have been useful to get a group of PGRs together for a focus group some months ahead of the session, to workshop their skills needs more precisely[6]. Nevertheless, I toyed with making the entire session hands-on, being a kinaesthetic learner myself this would have been my personal learning preference. However, I really felt the session needed fleshing out with some elements of chalk-and-talk to provide illustrative and instructive context. I decided given the constraints of available workshop time that what would work best would be to offer the delegates a schmorgesborg of topics within the realms of written, verbal, non-verbal and digital academic communication. The intention being, no matter what delegates’ interests or personal learning expectations were, that ideally there’d be satisfactory learning elements for everyone.

Access the session slides via the image below, although without my narrative they might lose a certain clarity. 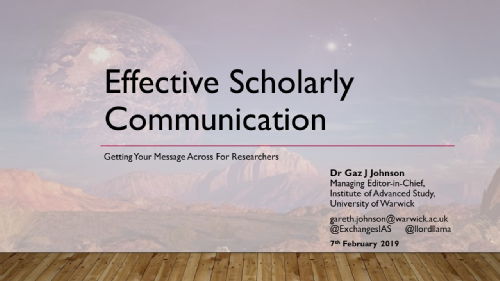 So it was that the Effective Scholarly Communication workshop version 1.0 received its premier performance last week to a, well, slightly smaller than was optimal audience. No matter! My teaching and public performance motto has long been ‘Just play the gig!’ Which means through embracing my customary passionate and entertaining teaching performance, hopefully I provided the handful of delegates with something useful to ponder, consider and reflect upon. I do feel structurally the low turnout worked against the desired delegate interaction levels I was hoping to engender. Certainly, I had to revise on the fly a number of the workshop elements as well, to accommodate for the low numbers. I’m not entirely convinced these rejigged versions quite delivered the learning outcomes for which I was aiming. The session was designed as much for the delegates to learn from one another’s varied practice and experience, as listen to the ‘great sage on the stage’. The low numbers, I personally believe, were detrimental to some of the value delegates received from their participation, which is regretful.

Nevertheless, from the delegates’ feedback, the workshop does seem to have been a very successful activity and they benefitted from their attendance. The worked exercises and interactivity came in for particular praise, which was deeply satisfying as a good workshop stands or falls on such activities. Undoubtedly, the degree of personal attention I was able to offer the audience likely contributed to their satisfaction too.

Like many academics, I remain somewhat of a perfectionist when it comes to my teaching and communicative practice, being rarely entirely satisfied with my materials and performance. I went into delivering this workshop fully aware that the original flavour, 1.0 version likely had some ‘fat’ which could have been judiciously trimmed, along with some contextual material which received insufficient prominence. Partly, this is a consequence of available preparation time, but it’s also a result of exposing the workshop to live, breathing, scholarly delegates for the first time. Hence, I’ve spent a couple of hours today looking through the delegate feedback, alongside my personal critique of the session, to identify what worked well, what didn’t, and where the session was lacking content. Good, solid, self-critical, reflexive practice in action, which will come in useful should this session be prepared for a second outing.

Naturally, the question forms in my thoughts: what next for this workshop? I’d originally planned to run the session twice within the RSSP 18/19, although I had to cancel the original November ’18 premier due to my pressing, more urgently in need of addressing, work commitments. Currently, there are no concrete plans to run the session again, although I based on the feedback I’d anticipate being asked to offer it in RSSP 19/20. That aside, I’ve had an outline approach to run the workshop (or elements) with the IAS’ Accolade training programme for our research fellows. Given the delegate numbers we get to those events, I think the challenge would be making the session coherent as I don’t think upwards of twenty delegates would make for a viable session[7].

With the training written, field-tested and subjected to a little peer review (thank you delegates!!), I’m sure evolving the next iteration will be faster, although I’ve a few more communication texts I’d like to read in preparation! Then there’s the 3.0 version and perhaps taking the show on the road to consider. Certainly, this is one workshop I’ll be able to deliver repeatedly, albeit with subtle and suitable enhancements.

Thanks to the RSSP Student Careers and Skills team for their administrative support and commissioning the session. Also the netizens of the air-l@listserv.aoir.org list for sharing their insights. Finally, thanks to the PGR delegates who attended, shared, participated and engaged, I hope the session was of value!

[1] Version 2.0 may revert to Effective Academic Communication as I Scholarly Communication tends semantically to be associated with publishing, and the session was broader in scope.

[3] Portmanteau of ‘producer’ and ‘user’ indicating someone engaged in ‘peer productive’ creative activities, as a ‘professionalised amateur’. Something community media sharing platforms have enabled.

[4] Some of which people have even read!

[6] Might be something useful to conduct for a revised version. If any PGRs would like to take part, drop me a line.

[7] Ideally around 12-16 delegates, enough for interaction, but not too many to diminish individual attention.