Delighted once more we have a new episode of The Exchanges Discourse live for your listening pleasure. This time I'm in conversation with Dr Doro Wiese about her work and publications. Doro’s one of our WIRL-COFUND fellows, based in the IAS and the School of Languages and Culture, and I will confess was an absolute to delight to chat with. I only regret I didn’t keep the recording going, as we talked almost as long once the interview finished about reviewing activities and the foibles therein. Possibly, we’ll need to come back to that in a later episode.

I’m also please to say I’ve got one future guest already signed up for after the Easter break, and a couple of others who are looking to find gaps in their schedules to chat with me on the record. Of course, we also have a new batch of IAS fellows coming along in April, so who knows, we may have some of these bright sparks looking to have a podcast chat as well.

Naturally, while we’ve been a bit ‘Warwick centric’ with the podcast guests, we always welcome approaches from academics near and far to come on the show. Drop me a line if you’d like to talk about your publishing, to an interdisciplinary audience with an interest in early career scholar development.

In case you missed it in the editorial of the latest issue [1], our latest call for papers is now out. On top of our ongoing open call for papers from all disciplinary traditions, we’ve made one of our frequent thematic calls too. For the Spring 2020 issue, we particularly welcome submissions which will contribute to a themed section on in-between spaces. As scholars we are often focussed directly upon examining and understanding specific objects, cultures, properties or thinking. Yet, there is also incredible value in considering what lies between, outside or around our subject focus.

That’s why we’re looking for authors to submit all manner of research articles, critical reviews or interviews which address some aspect of in-between spaces, however you or your disciplinary field opts to conceptualise them. I’d be particularly delighted to see submissions of dialogues between multiple authors from different fields tackling the same idea from different perceptual or intellectual standpoints.

To read more details about our calls, see the online paper. Or alternatively get in touch with any of the editorial board to discuss your ideas further. We really, really look forward to receiving your submissions.

[1] What!? You’ve not read the latest issue of Exchanges? Better correct that before you read on, I can wait. https://exchanges.warwick.ac.uk/issue/view/25

I've been tinkering on the side improving the standard poster we have for promoting Exchanges. Fair to say this one isn't going to win any graphic design awards, but it does nicely encapsulate what we do here at Exchanges command. Should anyone want a printed off copy to display in their offices, common area or library, please drop me a line and I'd be delighted to send you one (or more).

Signed copies are, of course, extra. 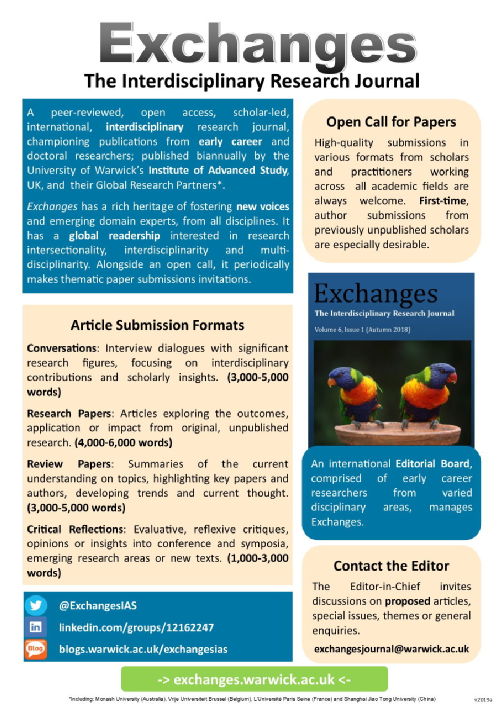 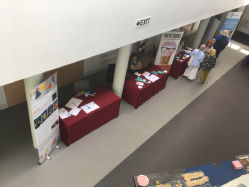 Following the latest issue’s recent launch, the Editorial Board for Exchanges is delighted to introduce our next call for papers. For the spring 2019 issue we’re looking for submissions from across the sciences, social sciences, arts and humanities which address the intertwined topics of division and unification. You can read all about what we’re looking for in the official call notification.

I suspect there’s a lot of healthy debate and discourse around one or both of these twin topics within every discipline, and I really look forward to reading the submissions from authors choosing to tackle them.

Naturally, alongside these we warmly welcome non-themed submissions as well - so if you were looking to address a completely unrelated area of research, then do please consider us as a potential destination for your papers.