All entries for September 2019

On Monday (16th Sept) this week, I had the delightful opportunity of attending and speaking at the Vitae Researcher Development International Conference, hosted at the Hilton Birmingham Metropole Hotel. Leaving home before dawn, and returning home quite late in the evening, it was nevertheless an excellent event. Exchanges has a core mission to support not only the dissemination of early career researcher’s discourse and, in line with the IAS’s mission, also seeks to work with authors in developing their prose and voice. Hence, attending a conference focussing solely on the practice, theory and policy of developing researchers was very much in my interest.

While the conference was broken down into plenaries, breakout sessions and workshops like any conference, it was interesting to witness the recurrent themes that came up, especially during the opening keynotes. Wellbeing was a strongly represented theme, along with that of coping with a changing research environment, both for researchers and those who work alongside them. Perhaps not unsurprisingly, the ‘B-word’ was alluded to on numerous occasions as a particular challenge for the entire HE sector, not to mention the nation as a whole. However, it wasn’t a topic that any of the sessions I attended specifically focussed on, but nevertheless remains the elephant in the room we can’t simply ignore.

These dark clouds aside, after the fairly rousing opening session, we moved on to an excellent lunch before for me the high-spot of the day: my own talk. Those of you who have met me, know there’s on thing I love doing (almost) as much as managing Exchanges, and that’s to talk about various aspects of scholarly communication and publishing to anyone who will listen. At length.

I was speaking as part of a panel session providing case studies of researcher development practice. It was, as a few of the speakers commented, a slightly odd session in that the examples of researcher development ranged from an exemplar collaborative workshop to discussions around a specially configured building housing 6 overlapping departments in Barcelona. Nevertheless, the packed room seemed responsive to the topics discussed. My own contribution was very well received too, as I was bombarded with questions during and after the session. There was quite a positive response on social media too, and I suspect there may be some follow up with a few people as a result. My thanks to the conference organisers for hosting me, and I hope to be back with another paper next year!

After this session there were a couple of ‘half-plenaries’, so called as half the delegates would fit into each of the allocated rooms. I attended the one with the more senior academics speaking, and after some (slightly baffling) discussion on the ‘concordat’ [1], two particularly inspiring talks from Prof Matthew Flinders (Sheffield) and Prof Marcos Munafò (Bristol) followed. Matthew’s enthusiasm in particular was infectious, especially given he launched into his talk before halting after a couple of minutes to realise he’d failed to introduce himself to the audience!

Matthew expounded on the theme of change, but also uncertainty, in that ‘change is endemic’ within researcher careers, but what and how it is changing is not easy to identify or quantify. He also noted how much developmental effort centres on early-career researchers, but given the post-doc period of employment now increasingly stretching to a decade or more, the mental health toll on many emerging scholars is immense. And this is even before they land their first ‘academic’ post. He noted how mid-career researchers and professoriate also need developmental support and mentoring (‘the M word’) in order to cope with both the changes across the academy and within the ‘academic job’ remit. This he stressed was alongside the need for them to be able to offer effective support to their subordinates. He took the opportunity too to criticise the ‘silly culture’ wherein scholars leaving the academy are perceived to have ‘failed’ by their colleagues remaining behind. He argued these people could return to universities and bring an incredible richness of experience with them, and yet systematically they were disenfranchised by the career esteem models the academy has embraced, to the detriment of teaching and research. Matthew concluded by noting how the academy doesn’t sufficiently celebrate, support and manage the exceptional talent they have within research support staff and units; which given the increasingly crucial part they play within the modern research team was disheartening.

Marcos, started on a theme familiar to myself, that scholars are more incentivised (through career esteem structures and metrics) to publish and bring in funding, rather than to produce research which answered genuine problems. He noted, as has been discussed elsewhere, the lack of publication of ‘null results’, due to the low esteem it brings to journals and authors, results in pointless and resource-costly repetition of experimental research which could be avoided. He also drew the insightful simile concerning academia, notably doctoral programmes, and the US 1970s motor industry; where the focus on mass production ignored the many errors requiring remediation. Marcos also highlighted the lack of accountability within the academy, illustrated by failing PhD students. Here, there was little blowback on supervisors when this happened, which was not an equitable state of affairs. Marcos also highlighted how senior academics continue to be recruited for the possessing wrong traits for their roles. People are being picked for being career superstars with strong esteem credentials, rather than being able to demonstrate strong human resource, managerial and project management abilities. This he suggested added to the problems faced by the academy as an employer and in terms of employee wellbeing.

After this excellent session, I attended a workshop on failure and PGRs – Fail Live, delivered by Davina Whitnall and Dr Ursula Hurley at the University of Salford. While fairly discursive, and inaugurated with a guided mediation, I confess of this conference session was the one which inspired me the least. That isn’t to say the topic of embracing and celebrating failure as ‘part of the story of success’ wasn’t an important one to be addressed. However, the workshop felt unwieldly in terms of content and delivery, and I suspect it would have worked better with a smaller and more intimate audience, than to a room of 40+ delegates.

To end on a high, I concluded my day in one of the special interest sessions, in this case concerning academic podcasting. Hosted by Donald Lush (King’s College London) the session made use of the time to do a ‘live’ recording of a joint episode of two podcasts: one aimed at established researchers and the other at doctoral candidates. I’ve long been a producer and contributor to podcasts in a personal capacity, and I confess they’re on my wishlist to develop around Exchanges and our contributor community as an extension to the journal’s brand and discourse contribution. In this respect, myself and the library’s Scholarly Communications team have been having some tentative conversations about this and other media areas, so perhaps watch this space for news of our future collaborations.

As you can tell from these reflections, I was pleasantly surprised to find such an embarrassment of inspiration, insight and engagement at the Vitae conference. It exceeded my expectations in nearly every sense, and I wished I could have somehow transcended time and space to attend many more of the breakout sessions than I was physically able. I also slightly regret only booking for one of the two days, as the second day also clearly included a lot of engaging material. I look forward to catching up with my Warwick library colleague who was in attendance throughout.

Nevertheless, I was delighted by the reception of the work that Exchanges and my editors do, which is something I’ve passed along to them, in partial thanks for all their efforts in helping keep the journal running.

[1] That would be The Concordat to Support the Career Development of Researchers, but it wasn’t something I was keenly aware of until after the conference.

Well the good news is the relocation to the new offices for Exchanges Headquarters this week has been pretty successful, although there’s the usual niggles. Not to mention getting used to a new location and finding all the important local amenities, along with working out the most logical and effective places to stash my office supplies. There is though a lovely view out of the office, and I’m writing to this entry to the happy sound of birds tweeting directly outside my window. Hence, I suspect this will be a splendid space to conduct the journal’s business.

As next week I’m speaking (Monday) at the Vitae International Researcher Developer conference in Birmingham, I’m tied up today with running through my talk, so apologies for a shorter than usual rumination on developments in scholarly publishing.

In the meanwhile – here’s a reminder of all our currently open calls for participation:

For the Spring 2020 issue, Exchanges particularly welcomes submissions which will contribute to a themed section on in-between spaces. Deadline 1st Nov ’19 https://exchanges.warwick.ac.uk/announcement/view/15

Finally, for early-career or post-graduate researchers at Monash University, we're looking for new recruits to join our editorial board. See details here, or speak to any of our current editors. Deadline 20th Sept. https://blogs.warwick.ac.uk/exchangesias/entry/call_for_editors/

Out of Office, and into a New One

It's all change in the Exchanges editorial office this week - or rather, it's all change forthe Exchanges editorial office this week. Myself, along with my colleagues in the Institute for Advanced Study (IAS) are relocating to some lovely new offices closer to the heart of Warwick's campus. And in my case, nearer to the local wild fowl too. I'm writing this message off-site today, having packed up my entire office into three crates which will be moved at the start of the next week to my new office. 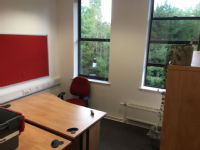 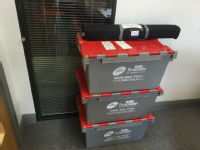 This might mean a slight blip in communications, while I get my computer and phone transferred and set up, but hopefully it will be so brief most readers probably won't even notice. Rest assured though, the Exchanges servers will remain fully operational and accessible throughout, so you'll be able to read, submit and interact with the journal as normal.

I'm very excited about the move, as it's introduced some new possibilities for engaging with the local early career community that I'm in the process of developing. Naturally, more about these once I'm ready to announce.

In the meanwhile, don't forget about all our various open calls for contributions and participation - the editorial team are waiting to hear from you!