Updating our open call for papers for 2022

A legacy piece of vital information gets a brand new 2022 hat, as our Editor-in-Chief updates our open call for information.

Today I got around to handling a task which has been pending for a little while: revising the text of our open call for papers. I know from experience how some of our authors come direct to our submissions page when they want to find out more, and that’s great. On the other-hand though, I’m aware more than a few prospective authors look towards the journal’s front page, especially our announcements section, when they are looking for news or information about the types of work our title likes to receive. As a result, the announcements section has long been the perfect additional location place to host this kind of vital information on Exchanges.

Now, the prior version of the text was, admittedly, getting a little long in the tooth given how I originally wrote it back in May 2020. Since that time, I have also probably adapted, reworked and reused this same block of text in the pages of each issue's editorial too, so there has been a sort of second life for the material. Nevertheless, I decided rather than drawing on these 'child' versions, writing from fresh about the kinds of manuscripts we like to receive for the journal seemed a better option. Certainly, coming at it from a fresh angle felt a superior route in terms of clarifying a few further issues for our authors.

I also took the chance to add in a new nugget of information that our most recent version of OJS makes possible: acceptance and rejection rates. Before the January update if I wanted to generate this kind of information on the fly, I would have to do considerable amounts of manual processing. Now though, it is possible to generate this kind of statistical information - along with other useful stuff too - in an instant. I can even specify a particular date range. Which means should I, for example, want to see how my own tenure as chief editor ranks alongside those who came before, in terms of our quality bar, it is now the matter of a moment’s work.

For the record since 2018 our acceptance rate for publication has been 55% of all submissions. Which, given the reaction I've had from a few people I shared it with over the last week or so, seems to be a reasonable figure for our kind of title. Doubtless, I'll probably find time to delve into this statistics module a little more deeply over the coming months, and maybe return to reflect on what I find here as well.

For more information on submitting to Exchanges, or about the journal in general, contact Editor-in-Chief, Dr Gareth J Johnson (exchangesjournal@warwick.ac.uk). 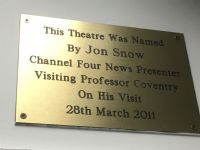