Don’t worry. Exchanges isn’t about to make a major pivot and set up shop as a full-blown academic publisher. No, the title in questions refers to a forthcoming panel discussion I’ve been asked to chair as part of the IAS’ Accolade programme (Thu 9th June). In a similar vein to the one I chaired a few weeks ago on strategic article publishing, this session sees a small collection of scholars coming along and talking about their experiences – this time focussed on monograph publishing. Specifically, the session’s title alludes to developing a monograph proposal, but I suspect conversations will drift wider than this to encompass the whole publishing journey.

Hence, my hope is that the panel will be able to expose the high and low spots of their publication journeys. I think crucially this will be complemented by an exploration of the initial steps – answering the key question of ‘How do I start?’ for the audience. Naturally, as a journal publisher myself, I’m going to be especially interested in hearing about their interactions with editorial and production staff alike. These might not be the focus of discussions -more’s the pity – but I suspect there will be a few insights or even revelations along the way!

Of course, like the previous panel my hopes are for the majority of questions for the panel to be raised directly by the attendees. I am understandably though also in the process of developing a battery of discussion points to prompt some initial debate. It’s always been my experience in running panels like this that you normally need a couple of ice breaker questions, and perhaps a closing one, to shape the session. Beyond these, I find the audiences are usually willing to drive the direction of conversations themselves. That said, as an experienced panel facilitator, I’m also prepared for a lengthy stony silence from the audience too which is why I like to have around a dozen back-up questions to hand.

Suggestions for any potential questions or topics to put to the panel ahead of the event, are of course always welcomed via all our regular communications channels. Personally, I’m very much looking forward to participating in these discussions, so here’s to a vibrant exchange of insight!

Academic journals and you

Today I did a repeat performance of last year's seminar for the undergraduates on the theme of academic journal publishing. As always I had the horrible feeling I was somehow pitching it simultaneously too high and too low for the audience, but as it turned out it seemed to go okay. A discrete audience mind you, which made the interactive portions a bit more challenging - but I guess we're near the year of the academic term for so many students I can hardly blame them for not wanting to turn up!

An excellent question on converting a dissertation into an article – which I think I’ll adapt for inclusion should I be asked to re-run this session next year. Maybe less on the journal world and more on the writing aspect I think might have been a good idea, so we’ll see if I can conflate a couple of slides and add in a new one on this topic instead.

Also a first for me - being asked a question on video by an attendee travelling at high speed train across Europe. Truly, we are living in the future! Should anyone be interested - I've made the slides available on my Research-Gate account. 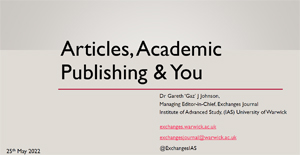 Last week I hosted a couple of workshops for the IAS. The first (3rd May) was the return of my popular Exchanges Ask me Anything session, wherein our early career fellows get to ask me, well, anything about the journal – and often the world of academic publishing at large too. They also get to watch me sip a cup of tea as I offer them time and space to think of their questions without me talking too. Seemed to go well, so far as one can tell in an online teaching environment. We’ll be running this again in the autumn I suspect for the next batch of ECFs we induct.

Thursday (5th May) though was the more significant of the workshop sessions. This was my second iteration of the Developing your Publication Strategy, which regular readers will recall I originally hosted back in March 2021. As this had been such a successful session, I was asked last month if I’d be willing to offer it again: a request to which I quickly agreed.

I decided this time fantastic though the panel members were last year, that for this new panel I’d try and recruit some different voices. Different academics would bring with them fresh and unexpected perspectives, and I hoped would contribute to an engaging session for the delegates. As before, I reached out to a goodly number of contacts, many of whom were unavailable (if otherwise willing) to participate. I did though, thankfully, strike gold with three past Exchanges authors and I will confess, past podcast guests too: Dr Catherine Price (Nottingham), Dr Mark Readman (Bournemouth) and Prof Monica Mastrantonio (York). Thanks to the efforts of the EUTOPIA Consortium, I was also able to recruit Prof Marcus Pivato (Cergy Paris) to add into the mix as well.

I was delighted to say we had a packed 75 minutes during which my four panellists handled all manner of questions from the audience. From complex ruminations on creating an interdisciplinary portfolio, through to their thoughts on the current scholarly communications field and advice on how delegates might refine their own practices. While I had a battery of questions to hand to keep the conversation flowing, should the audience be a little restrained in offering their own, I had little need to return to these during the session. It certainly was a lively debate, and feedback from speakers and delegates alike on the day seemed most positive.

I am naturally deeply indebted to all of the speakers for their participation and gracious gift of time, as each of them really helped the session come alive in different ways. As panel chair it was interesting to observe how we touched on similar topics to the 2021 session, albeit debating them within a slightly different framing. Such is the joy of running a panel session – you never know quite what you’re going to learn.

I am also grateful to the audience, who played their part well. Not only were they thought provoking in their questioning, but they also contributed to a wonderful continuing thread of debate within the text chat. Certainly, one advantage of hybrid/online sessions over a f2f one is that you get this wonderful additional thread of debate available for all, rather than just the people you’re whispering sitting next to you. Prominent among the topics tackled here were perceptions of peer-review and anonymization, which exposed some very big divides and surprising disciplinary assumptions among panellists and audience alike.

The text chat also captured a range of resources and links, that I promised to collate for further interest [1]:

I very much enjoyed running this panel, which was illuminating for myself as well. Hopefully, we’ll see this panel session revisited in some format during 2023 once more – with yet another set of fine panellists!

[1] Beall’s ‘predatory’ trash journals list came up too, but given the considerable issues over this in recent years I’m not including it here.

As revealed in the recent Volume 9(2), Exchangesis delighted to announce the launch of our first ever readers’ survey, tied in to the progress towards our tenth anniversary issue in late 2023.

Hence, the Editor-in-Chief, and Editorial Board, would like to strongly encourage our readership, and indeed anyone with an interest in the title, to offer some insights into what they most value and desire from the journal. The survey is, by necessity and efficacy, a brief and anonymous instrument which should take 2-3 minutes to complete at most.

To participate in the survey – please follow the link below:

Should you experience any issues - be they local security measures or simple accessibility - with being able to access or respond via this form, then please contact me directlyand I will provide an alternative format.

Thank you in advance for your comments as you will undoubtably help us in shaping our own direction of travel and aspirations for the nextten years of Exchanges!

The survey will run throughout the next month or so, closing on or around Friday 17thJune 2022.

In case you missed it, we have a themed call for papers now open which ties in to our planned 10th Birthday Issue in October 2023.

we are seeking contributions which seek to celebrate, challenge or define ideas around authentic interdisciplinarity. Authors may wish to draw on their own research practices and activities or adopt a more holistic stance in engaging with the prior literature and activities within this broadly demarcated field. As is Exchanges’tradition, we will potentially consider any work which its authors choose to present which seeks to address the themes evident within this call.

Authors may also wish to draw upon methods or methodological practices within a variety of field. Alternatively, they may consider explore if there are discrete or disparate audiences for interdisciplinary rather than unitary disciplinary work in academia today. Additionally, pieces considering, rationalising or amplifying cross-disciplinary discourse concerning centring on the concepts of authentic interdisciplinarity would be warmly received.

Authors looking for further inspiration should read the full text of the call at: