Last week I flew out to a scorchingly hot Italy to the Utopia, Dystopia and Climate Change conference, being held at Monash University’s Prato Centre. I was in attendance as an invited speaker wearing my editorial hat, making this the second successive conference I’ve attended both in Italy and around climate change as a theme. You might suggest there’s something in the air, but I couldn’t possibly comment.

This time, rather than the STEM focus of ESA Living Planet 2019, I was at a primarily arts and humanities event, hosted by the Utopian Studies Society, Europe. Thankfully, this was a slightly smaller conclave than the previous Brobdingnagian scale Milan event, although there were certainly dozens of eager utopian scholars attending. As I previously commented, there’s real eye-opening value in attending events which lie outside one’s own discipline, and this one certainly was fascinating. Due to time constraints, and perhaps a subconscious desire to escape the heat [1], I was only present for the conference’s opening day, but I found it a very valuable experience all the same.

Once again, I received a very warm welcome from the other delegates and enjoyed a range of stimulating conversations about their research, along with insights into their career journeys. In a couple of cases I had some very in-depth discussions concerning the job market beyond academia contrasted with the ‘publish or perish’ marketised HE environment. A topic, for another post, or if you buy me a drink sometime at a conference, a lengthy diatribe.

Primarily I was attending at the invite of the organisers to deliver a session targeted at doctoral candidates and early career researchers on ‘journal publication’. A very broad remit undoubtedly, and one which I fear I could speak for far longer than my allocated 30 minutes. So I took as the central theme for my paper the experiences of publishing a scholar-led journal led by and for early career researchers. Monash’s Prato Centre is a delightful building from both the interior and exterior, and a very grand environment to talk to fellow scholars. That said, to my slight trepidation I discovered I was delivering my session on a panel with the Society’s chair as the other speaker, so a modicum of extra pressure there.

My talk, the slides from which I’ve linked to below, was very well received by the standing room only audience. I’m happy to take their rapt attention and response to my talk as a signifier of the delegates’ general strong publication participation interests, rather than a desire to hear myself particularly. However, I’m delighted to report I’ve had a number of subsequent conversations both at and after the conference about publishing with Exchanges, so I deeply believe the trip was a valuable one for the journal.

Of course, I was also there to reveal the early details of our forthcoming themed special cli-fi issue call for publications [2], largely targeting delegates at the conference, but also potentially embracing other scholars with a strong interest in the field. Given the range of papers and discourse at the conference, I’m reassured this will be a fascinating issue.

No more conferences for a couple of months now, so I can focus on developing the journal, and doing a little bit of publishing of my own, over the summer. But regular readers can rest assured, I’ll be keeping you updated on the developments within Exchanges over the coming weeks and months. 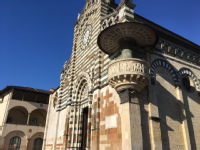 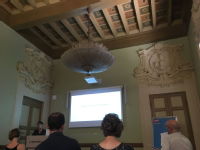 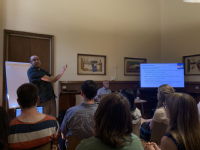 [1] Although I’d planned my visit duration months ago

[2] Probably coming out sometime in August 2019, keep an eye out for it