All entries for November 2017

Which way forward for USS?

A couple of weeks ago I was surprised to learn that Universities Superannuation Scheme (USS) trustees have adopted a more conservative approach to the valuation than had been the case in the last consultation, and that the collective response from the Universities UK (UUK) consultation is now apparently supportive of the removal of the defined benefit element of the current scheme, at least for the immediate future.

It is a very significant change, that if implemented, will greatly impact on a large number of colleagues in Warwick, as well as in other universities around the country.

I am sure that I am not alone in being mystified at this change. After much work and consideration, we were relatively comfortable with the level of risk proposed previously by the trustees and broadly content with assumptions which appeared valid in the round. We reported as much in the consultation formally. USS is now the largest remaining defined benefit scheme in the country not backed by government (on which, more later). There has been a market logic to a number of private sector defined benefit schemes being closed. There are concerns about the levels of funding required to keep it functioning, and these concerns seem very widespread at the moment.

The assumptions in the consultation with the sector have now been altered, and so I support calls from others for more transparency, particularly on issues such as self-sufficiency, mortality assumptions and projections for gilt yields, since these are the building blocks upon which a new greater conservatism has been placed.

I can assure Warwick staff that we will reiterate our previous concern that the proposed de facto end to the defined benefit scheme will require USS’s investment strategy to become increasingly cautious, which would materially inhibit the future growth of assets out of which pensions will ultimately be funded.

The latest iteration of the valuation has very serious consequences for staff and for employers in the sector, and we want to explore how we can get to a position where there is a threshold for the defined benefit scheme which is workable and supports early career academics in particular.

We are very conscious that there are alternative more attractive schemes in place elsewhere in the sector (e.g. Teachers’ Pension Scheme which is available to the post-92 sector) and are increasingly concerned that a very large multi-employer scheme, such as USS, is being placed in the same regulatory regime as that applied to more traditional private sector schemes, with far reaching consequences for staff in pre-1992 higher education institutions.

So what is to be done? First, we will press, as above, for greater understanding and explanation as to what has changed in the process. But second, I think we should also explore the possibility of obtaining government backing for the pension scheme and the possible benefits that might bring. A government backed scheme becomes an asset for the government, but provides vital underpinning for members.

Whatever happens we will not let the current increasingly conservative approach to USS go unchallenged. As a University, we need to be able to offer a competitive and high quality pension scheme and we will seek to work with any other interested parties to identify whether any alternative, more innovative, solutions may be feasible.

We often talk about ‘teaching’ and ‘research’ as two entirely separate activities within universities – the extent of recent regulatory intervention around teaching such as TEF and the Office for Students demonstrates how little apparent connectivity there is seen to be between our already well-regulated research and impact, and the teaching experience we deliver.

In reality, research and teaching work best when we look at them hand in hand, each enriching the other, and both at the heart of a university’s mission. At Warwick, we are absolutely committed to research excellence, and to ensuring this is brought to life in the educational experience we offer our students.

This is one of the characteristics which I think sets a Warwick teaching and learning experience apart – our students are able to benefit from access to world-class research and researchers, to work with individuals who are genuinely advancing knowledge in their areas and take up opportunities that inspire them intellectually, and make them stand out in the future in their chosen career path with prospective employers.

In that context, I have been pleased this week to see the development of our Student Research hub. It directly links our research and teaching by shining a light on what research is, and showcases the range of research-related opportunities available to students at Warwick. The hub shares video testimonials from students, employers and academics to give perspectives on the benefits of getting involved in research in an extra-curricular setting. Even better, the hub was built by two recent Warwick graduates.

Whether you’re a student looking for expertise to help get your research ideas off the ground, looking at research as a future career, or – simply – a student wanting to make the very most of your studies – I’d urge you to take a look. It’s going to be fantastic resource and I’m proud that we have it here at Warwick.

Warwick is a founding member of the Guild of European Research Intensive Universities. The Guild was established in 2016 to bring together 19 of Europe’s most distinguished universities across 14 countries to enable us to develop a new, distinctive voice in Europe. Through the Guild, we can engage proactively and collectively on the major opportunities and challenges impacting our institutions, our researchers and our students - including Brexit and the EU’s research and mobility programmes. Warwick’s membership of the Guild underlines and supports our commitment to be a leading global research and teaching institution, working with our partners to set new standards for collaboration in research, teaching, innovation and public engagement.

I wanted to share with Warwick colleagues and friends a blog from the Guild’s Secretary General, Jan Palmowski, giving his perspective on the critical contribution our academic communities must make through research collaboration and the movement of ideas and people.

Having just read this week’s issue of Insite Inbox – Warwick’s staff newsletter, I’ve been reminded that Monday 13 November is World Kindness Day. Of course, it’s easy to be sceptical about the value of the growing number of “awareness” days, and yet their existence does prompt constructive action and reflection in some quarters of our society and in my view that has to be a good thing! For me, the announcement reminded me that it was about a year ago when I wrote my blog on kindness so it seemed like a good time to revisit this theme. Looking at the web coverage of World Kindness Day, I was struck by the focus on doing good things – kindness as positive acts (giving out chocolate, flowers, helping others). And while we should never restrict such positive acts only to one day a year, it’s great to see something that encourages a proactive approach to “doing kind things”. (And for Warwick colleagues wanting to do your bit within the University - look out for Warwick Kindness cards!) 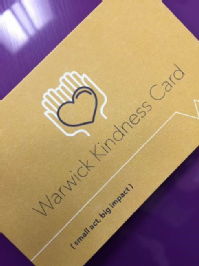 But we shouldn’t forget something that I think is equally important and that is the importance of “doing things kindly” – a way of behaving that I think can help us create a better working environment. When I blogged on this previously, I was at pains to stress that whatever we have to do in our working lives – even if it is the tough, difficult and painful decisions we may have to take – we should do so in a way that respects individuals, is supportive, constructive and compassionate.

It’s certainly a mantra that I try to live up to. Do I always succeed? Sadly, I probably don’t and I suspect that’s because sometimes it just isn’t easy and sometimes I’m perhaps careless or rushed. But I like to think my intentions are always to act kindly. And of course therein lies a challenge for all of us – what determines whether something is “done kindly” – is it my intention when I do something or is it your experience of what I do? Now, maybe this is a question that our colleagues in Philosophy are best placed to answer, but it reminds me that if we really do want to try to create a kinder working environment we do have to try to understand both the intentions and experiences of others. And I think this is about trying to see the best in people and trusting that they mostly have good intentions; it’s also about being sensitive and aware that even the most well-intentioned acts can sometimes have unintended consequences for the person who experiences then.

So if there is a message that’s going to be uppermost in my mind for World Kindness Day, it’s probably going to be one that focuses on the way I do things and, my experiences of things that others do. And a big part of that message will be a reminder to myself always to try to act kindly, always to be willing to learn from the experiences and responses of others if I am unintentionally unkind and finally try to be tolerant of others if I think they are not being as kind as they intended to be.