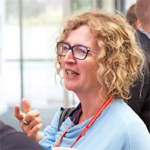 Rachel Sandby-Thomas, our new Registrar, has written the following blog on the Association of Heads of University Administration (AHUA) 'Meet the Members' site about her role, the institution and how's she's found working at Warwick so far.

I am Rachel Sandby-Thomas and I am the Registrar at the University of Warwick. The ladies at reception insist on greeting me as “The Registrar” despite my insistence on being called Rachel. Old habits die hard.

I joined the University of Warwick in August 2016, and am still feeling pretty green. Apart from being a student many moons ago, I have little history of involvement with HE, having spent the previous 23 years in Central Government. Like Matthew Hilton, I too have come from BIS. However, unlike Matthew, HE was not part of my portfolio. I spent 8 years there as a Director General so, although I have been part of many discussions around HE, my focus was fending off further cuts to the FE budget.

As Registrar, I am responsible for the People Group (which also includes Health and Safety and Wellbeing), IT, External Engagement and Press, Knowledge Group, Education Group (including the Academic Registrar), Delivery Assurance and Resolution, Legal, Secretariat to the Senate, never mind setting up a university in California! I am director and trustee of numerous entities and license holder for all sorts. However, above all, I keep having to remind myself what the Vice Chancellor said to me in a preliminary chat which was that, if he was on a plane and there was a problem on the non-academic side of the University, I am the person he would call. Ulp.

No one day is the same in this role. I spend my time in lots of informal 1:1 meetings and longer, more formal ones. I’m also trying to get out to meet people and am getting to know the campus, little by little. As well as the daytime commitments, there are many evening activities and appointments, such as the University’s own version of Question Time, a long service celebration, a 6 course taster menu. I have put on 4lbs since I started, a trajectory which cannot continue!

I am still on a steep learning curve and had forgotten how tiring that can be. I am finding that a lot of the skills and issues are the same but the context is totally new. Issues go from small but specific, such as vehicles taking up valuable car parking space, through to visionary away-days. Warwick has had a fabulous first 50 years…how do we make sure the next 50 remain as stellar? And I have a whole new set of acronyms to master – I much prefer the university meaning of PDR: Private Dining Room instead of Performance and Development Review.

I have been struck by how the decision making is more democratic which might sound strange coming from a world filled with politicians. The governance system is the obvious incarnation of this but I see it also in the wider sets of people and issues which need to be consulted before a decision can be properly made. That can be frustrating for someone impatient like me but yet I feel reassured by the fact that it has been scrutinised from multiple angles by many wise heads.

It is also eye-opening being at the opposite end of changes in policy. I hadn’t properly appreciated how thoroughly the external world scrutinises the words and actions of the Government, nor the extent of planning blight caused by lack of clarity around details of the change. Obviously this is a clear and present danger what with BREXIT, the TEF, local devolution and immigration, to name just a few. However, this just makes it even more challenging and fun.

My father is my lode star when it comes to job satisfaction. When I was contemplating, 23 years ago, my previous big change from private to public sector, I asked him how much he enjoyed his job. He said 95%. That’s what I have aimed for since. And all the signs are good so far for 95% and beyond…”