The first blog that I wrote on joining Warwick was about the gender pay gap and as we prepare to make our first statutory gender pay report as required under the provision of the 2010 Equality Act, it seemed a good time to return to this issue. And of course, having been here for 18 months, I’ve now got a much clearer idea of how our processes work and what’s being done to address this and other related issues.

Gender Pay
The new reporting requirements on gender pay mean that we provide high level information on pay levels and distribution for female and male staff – and across the UK, employers have started providing this information with the deadline for submission towards the end of March. And of course the broader issue of gender pay differentials has attracted considerable interest in recent months. We’re probably all familiar with the furore over gender inequalities in pay at the BBC while data from other companies has highlighted some equally dramatic differences in pay between men and women. Organisations as diverse as the Bank of England, Shell, Ladbrokes Coral and the Department of Health are reporting differences in average hourly pay that are comfortably into double digits while some airlines have reported one of the differentials as high as over 50% largely because of the relatively high salaries earned by pilots who are dominantly male.

The airlines example highlights one of the challenges associated with a reliance on headline figures across the workforce. The factors behind gender pay gaps are hugely complex which makes it hard to look at this issue from a generalist perspective. The University’s own figures point to a significant gap in average hourly pay between men and women overall.

Equal Pay
In trying to understand the source of differentials, a quick look at pay differences by grade shows that at levels 1 to 8, there is virtually no difference. As can be seen below, only at level 9 is there evidence that men are paid significantly more than women. 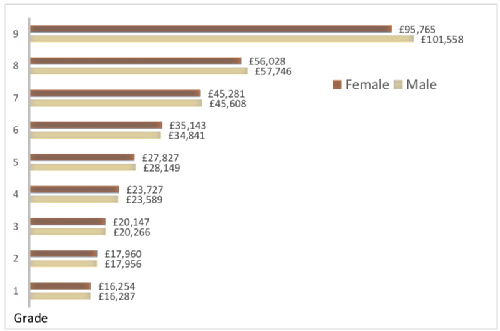 Grade 9 covers Professors and very senior professional staff. The differential here is marked but has fallen in recent years, in part because of a rigorous programme of equality adjustment each year as part of the review of senior salaries.

The problem that faces the University of Warwick – and indeed many other organisations – is not so much a failure to pay equally to staff at the same level, but rather a skew in the gender distribution across levels, with more women in lower paid occupations and more men in higher paid occupations. And until this changes, we can continue to pay equally for staff at the same level, but a gender pay gap will persist.

So, for us and for many other organisations, the imperative has to be around raising aspirations and creating opportunities for women to advance their careers. But there are few quick fixes. Some organisations outsource many of the activities that are dominantly female and lower paid. Their figures may look better but it doesn’t solve the problem. At Warwick, we prefer not to outsource. Some advocate quotas and positive discrimination – a more controversial approach and one that most organisations in the UK have steered clear of. Instead, our focus of attention continues to be on training and development, on the identification of structural barriers to progression and on tackling the widespread, implicit biases that inhibit the career development of women across all grades. It won’t produce quick change, but it will produce sustained change.