Pay Gaps and the Merit Pay and SPRR Processes

Towards the end of last year, the University’s Pay Action Group (PAG) published a series of blogs that examined our pay gaps in relation to gender, ethnicity and disability. Those discussions highlighted some genuine concerns about our current position as well as the challenges of trying to bring about real and long lasting change. We are working to explore a range of changes to policy and practice in order to understand how the University can address its pay gaps. For example, we have supported and encouraged new training and development initiatives, we have identified a number of changes to the University Recruitment policy and we are working on approaches to encourage more individuals to self-declare in relation to ethnicity and disability to ensure that our measurement is more accurate.

Understanding what our data tells us is an important part of the work of PAG; having looked at pay gaps in earlier blogs, we have been keen to consider other aspects of how individuals are rewarded. Most recently we have been looking at some of the outcomes of the Merit Pay process and Senior Pay and Remuneration Review (SPRR) to see if we can get a better understanding of how these processes work in relation to certain protected characteristics. These are both annual processes that reward individuals based on a judgement about their performance during the previous year. Merit pay applies to colleagues in grades FA1 to FA8 and SPRR applies to colleagues at FA9.

The table below shows participation in SPRR by gender since the 2016/17 review period. Participation in SPRR is voluntary and is an individual (rather than a manager’s) decision. The data show that while there is a markedly larger eligible male population, participation rates have been (on average) a little higher for female staff.

The distribution of performance ratings by outcome and gender is shown below. The distribution by outcome is broadly similar for male and female staff, although in the last two years, a slightly larger proportion of female participants have received the higher ratings.

The next two tables consider participation and grading on the basis of ethnicity. We use an aggregate grouping – BAME – because the relatively small numbers at FA9 make further disaggregation difficult. Currently, the BAME group is 9% of the Level 9 population – 50 staff in total. Apart from 2017/8, the differences between the two groups are small, but looking over the entire period the level of participation in SPRR by BAME staff looks to be a little lower than for white staff.

There is quite a bit of variability in the distribution of outcomes by ethnicity and, of course, the small BAME community at FA9 means that a change in the position of one or two individuals can have quite a big impact. Having said that it is noticeable that a rather smaller percentage of BAME staff were graded as excellent or outstanding in 2018-19 when compared with white staff.

The merit pay population is much larger than the SPRR population, covering all staff in grades 1-8. While there is some variability in nomination rates across grade and across area, on average, around 30% of staff are nominated for Merit Pay awards. Moderation processes are used to challenge nominations with a view to ensuring that there is fairness across the community. 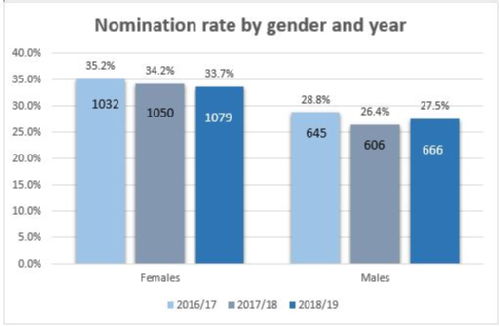 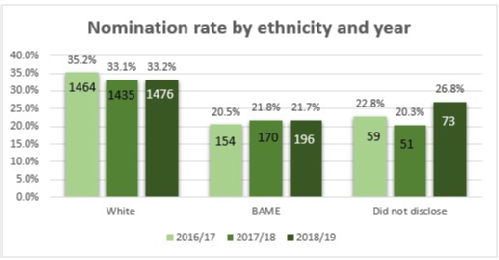 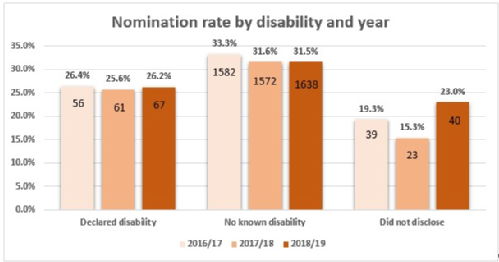 The change over time in the nomination rate for part-time and full-time is marginal, however it is worth noting a significant difference (around 7%) in nomination rates between these two groups of staff. 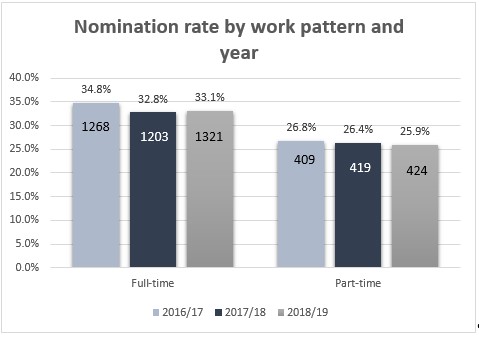 Finally, looking at staff group, the graph below shows that nominations for academic staff have increased for the 2018/19 review period whereas the nominations for professional staff has decreased by 5.6%. For the current year, there is a difference in the nomination rate of 4.9% between Academic and Professional Services Staff. 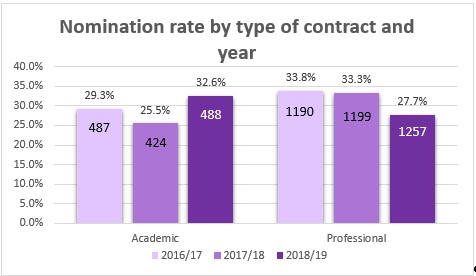 So, what can we learn from these numbers? Well for SPRR there is more variability in outcome by ethnicity than there is by gender – and numbers for disability are too small to allow any analysis to be undertaken. For gender, the simple male/female comparison suggests few differences but for ethnicity the recent outcomes look to be more favourable for white staff.

When we consider merit pay there are more marked variations in relation to protected characteristics and these need to be looked at more closely. And we will be reviewing the operation of the merit pay arrangements following this analysis and based on feedback from a number of different groups within the University.

There are still significant numbers of staff who do not declare their ethnicity and/or disability; without knowing the characteristics of the non-declaring staff we can’t be sure how reliable our analysis. Accordingly we will be exploring options for encouraging more staff to declare to ensure that we get the best possible understanding of our position and identify the changes that we might need to make.

Finally, it’s worth noting that what this analysis doesn’t do is consider issues of intersectionality – it looks only at single characteristics by themselves and future analysis will need to dig deeper to consider, for example, links between gender and ethnicity or links between work pattern and disability.