Netflix provide a means for you to watch stuff on your 'smart' TV, your iThing, your Androids and your computer, unless it runs Linux. To watch in a web browser on a computer you need Silverlight and of course there is no Silverlight for Linux. Apparently Netflix are ditching Silverlight, but right now you still need it. Inevitably lots of people using Linux want to watch Netflix on their computer and have been hacking together ways to achieve it. Here is my take on it, which works on SUSE Linux Enterprise Desktop 11 SP3 64bit. It's put together from various sources with some adaptations.

One additional package is needed which isn't included in a default SLED 11 SP3 64bit install and that's alsa-plugins-pulse-32bit. Without that you won't get any sound. Apart from installing that package it's all done as a regular non-root user and everything is kept nice and neat in one single directory.

Go to http://www.compholio.com/wine-compholio/#download get the x86-64 wine-compholio alien-ized RPM and save it to the netflix directory you just created. Wine Compholio Edition is a build of Wine with special patches which amongst other things, make Netflix work. Hurray for that guy.

Go to ftp://ftp.mozilla.org/pub/firefox/releases/ and get the 32bit Windows version of Firefox. Apparently it doesn't matter what version you get. I used what is at time of writing the latest 17ESR release, 17.0.8. Save the installer to the to the netflix directory

If asked about a Gecko-Wine installation, say yes. I said yes when I was asked. I ran through this process from scratch multiple times and wasn't always asked though. Couldn't work out why. Anyway, say yes if asked. Select Custom install and untick the option to put an icon on the Desktop to avoid ending up with a weird and unhelpful Firefox icon on your Desktop which launches the Windows version of Firefox. Untick the 'Launch Firefox' option at the end of the install.

Get and install Silverlight 4. I tried Silverlight 5 and Firefox locked up when I tried to watch anything on Netflix. I was able to watch Silverlight video on another website I tried though, which is curious, but so it goes with this sort of thing.

Get Winetricks and use it to install the Microsoft Core Fonts for the Web. If you don't have these the Netflix player chucks an error and won't play anything.

Now make a script to set all the required environment variables and launch Firefox.

Whenever you want to run it

Watch and enjoy. The first time you watch anything you'll get a Silverlight dialogue prompting you to 'Enable playback of protected content'. Do so if you want to be able to watch anything.

I've found that the video is watchable, but not as smooth as it could be even on a machine with an i7 processor. It seems smoother on that other site I mentioned earlier which again, curious but so it goes. I've found audio to be fine.

If like me you're one of the many people who don't live in the United States of America but occasionally wants to watch something that's available on US Netflix but not your regional Netflix, install the Hula Firefox extension and enable it when you want to access US Netflix.

So I found a better BBC Emulator than BeebEm. It's called B-em. Why is it better?

Then, as a regular user, run these commands:

F11 shows/hides the menu. Once you've loaded a disk you need to hide the menu again and press Shift-F12 to run it. 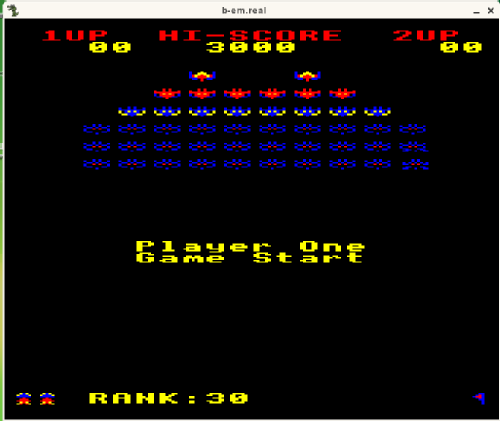 The trick to maximum points in Arcadians is to only shoot the aliens whilst they're swooping down. You get double the points for picking them off whilst they're in motion.

Follow-up to Handbrake on SLED 11 SP2 from Mike's blag

I decided to figure out what needed to be done to build the currently current version of Handbrake, 0.9.8, on SLED 11 SP2.

Then run the following commands. hbinstdir is where Handbrake gets installed to, change the value if you want. You can omit the lines relating to libdvdcss if you already have that installed somewhere Handbrake will find it, or if you don't want to be able to rip any DVDs that use CSS.

Assuming the build process finishes without errors then install

Initially I used LIBRARY_PATH=${hbinstdir}lib/ instead of LDFLAGS but system locations are searched before anything specified in LIBRARY_PATH and if you have fribidi-devel installed that's found first and the Handbrake build fails.

The recently released Handbrake 0.9.6 doesn't build on SLED 11 SP2, which is a shame. It's probably possible to make it build if you have more patience and knowledge of such things than I have, but 0.9.5 builds fine.

Become root and install the packages you need

Then as your your regular usercode you can do

--launch-jobs=0 causes the build process to make use of however many cores/cpus your machine has. On a machine with an Intel Core i7-2600 @ 3.40GHz it took under two minutes. Assuming all goes well, run it with

Firefox 3, GTK and a downside of Enterprise Linux distros.

N.B. On 6/8/09 Novell updated Firefox in SLED 10 to version 3.0.12. They packaged up newer versions of GTK etc and supplied them as packages with names like firefox3-gtk2. I guess they got tired of backporting security fixes in to Firefox 2, or it became too difficult or just impossible to do anymore.

So Firefox 3 is released today. This is a Good Thing but also highlights a downside of using an 'Enterprise' Linux distro. The Linux version of Firefox has a dependency on the GTK toolkit and Firefox 3 requires GTK 2.10 or higher. If you're using a Linux distro that has an older version of GTK then Firefox pops up a message about how it needs GTK 2.10+ then exits. Given that part of the point of Enterprise distros is that they don't change things like library versions for years at a time, (thus providing a stability lacking in distros that release a new version every 6 months or so), this leaves anyone using a version of an Enterprise distro that has GTK older than 2.10 with something of a problem if they want Firefox 3. I am one such person as my main work machine runs Novell's SUSE Linux Enterprise Desktop 10, which has GTK 2.8.

There is of course a solution. (Aside from hoping that someone will release Firefox 3 packages for the version of your distro you're using, which for an Enterprise distro seems unlikley.) Get a new version of GTK and point Firefox 3 at it. Except it may not be that simple since GTK depends on various other libraries, possibly newer versions of those libraries than a distro with a version of GTK older than 2.10 includes. Anyway, this is how I got Firefox 3 running on SLED 10. It should be useful as a guide for other distros though some adaption may be required.

You'll need the following packages installed: openssl-devel, libjpeg-devel, libtiff-devel, libpng-devel. The versions that are included with your distro should do. The names may be slightly different if you're not using SLED 10. Debian and Ubuntu tend to use -dev rather than -devel in package names for example. There's probably other -devel packages you'll need apart from those I've listed and which I already had installed, but you'll find out if that's the case when you try and build stuff.

These are the versions I used.:

I used Cairo 1.2.6 because it's new enough that Pango 1.20.3 will use it and old enough that it didn't require me to also build pixman.

I found I had to set the following environment variables to get the build to work. Note that the paths reflect where I installed the libraries so change to where ever you decide to install stuff.

In the order they're listed above, unpack the source code, build and install. The build command is the same for all:

I installed the packages in to /local/opt since obviously I want to keep it all separate to the libraries that come with SLED 10, that's somewhere non-root users can write to on my machine and not doing this as root eliminates the chance of a typo overwritting already installed libaries. You may of course find some libraries don't build because you don't have some package or other installed so you may find you have to install a -devel package and try again. Edit: If something fails to configure or build then read the errors. Look at what libraries are mentioned then see if you have the -devel packages for those libraries installed. If not install them then try again. If you get an error about cups-config not being present then install the cups-devel package. Also read the comments and see if someone else had the same problem and a solution is suggested.

You'll need to run Firefox via a wrapper script. This is what I use. If you're not using SLED 10 remove or alter the MOZ_PLUGIN_DIR value as appropriate. Replace /path-to-firefox/ with where you unpacked Firefox 3 and /local/opt with where ever you installed stuff.

Edit: I've just realised the MOZ_PLUGIN_DIR doesn't have any effect. I could have sworn that it did. Will have to look in to that.

Edit: Sorted out how to make Firefox 3 uses plugins in /usr/lib/browser-plugins and updated wrapper script.