For example, here he is surveying http://www2.warwick.ac.uk/insite/

Displays a sad Keanu image in a transparent GTK window that you can position where you wish. E.g. 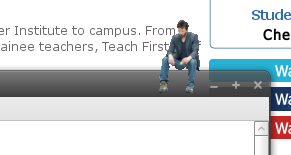 To move him hold down Alt and then click and drag. I was going to sit him on the bottom GNOME panel, but sadly it seems windows can't be set to be above the panel, so his legs aren't visible.

Some grease for the SeeSaw

Follow-up to SeeSaw (see what they did there?) from Mike's blag

It was only this morning that I got around to actually watching a programme on SeeSaw. It works just as you'd expect and it all seems good except for one glaring omission; There is no facility to pop the video out in to a new smaller window on it's own like there is on BBC iPlayer. Apparently such a feature is under consideration, but I consider it a pretty much essential feature so I whipped up a Greasemonkey script that adds it. So if you're using Firefox, have Greasemonkey installed and wish SeeSaw had a pop out feature, then click here. With the script installed the words 'Pop out' appear in the top centre of a programme's page.

If you have the Flashblock extension installed then that will mess up the script unless you've added seesaw.com to your whitelist.

Follow-up to Anti–favourites from Mike's blag

New version of my Warwick Blogs Anti-favourites Greasemonkey script. Hides entries about operational or human resource management exercises/lessons by default. Click here to install it or read more about it.


I was originally going to make it a separate script but very quickly got bored of trying to work out a satisfactory way to prevent the Anti-favourites script overriding it's actions. (Merely setting the script execution order doesn't work since the Anti-favourites uses an asynchronous XML HTTP Request meaning Greasemonkey carries on to the next script before it's finished.)

Andrew Marr's History of Modern Britain was on first shown around this time last year. If you didn't see it then it's well worth a watch. There's five episodes, the first of which is linked, covering how the country has changed since the end of the second world war.

The Greasemonkey inclined may find their iPlayer experience enhanced by this script which opens the current iPlayer page in a chromeless window just big enough to contain the actual player, as depicted in this here jpeg, which you can shove to one side of the screen and/or 'float on top' should your GUI of choice offer such a capability.

The greasemonkey script I call  Wawrick Blogs Media Suppressor hides any images or objects (e.g. embedded video) above a certain number and replaces them with a placeholder than can then be clicked to display the supressed images/objects.

E.g. the default limit for images is 5. If an entry contains 15 images then only the first 5 are displayed and where the 6th image should be the words 'Click to shows 10 suppressed images' appear.

The Warwick Blogs Anti-Favourites Greasemonkey script allows you to hide entries from specified blogs on the recent entries pages. Essentially it does the opposite of the Favourites feature. (Though there is no facility to specify tags…yet) I wrote it so I don’t have to see entries from blogs that are always written in a language I can’t read or where the content relates to a particular course module. Click here to install it or read more about it.

If you’ve been paying very close attention to my blog you may recall I posted about this once before. In a moment of complete inattentiveness I managed to delete the post less than 24 hours later and it turns out deleted posts cannot be recovered Thanks go to Steve who picked the script up before I deleted the post and drew my attention to several circumstances under which the script didn’t work (but now does).

go urls are great. Especially so if you're on campus as you can forget the warwick.ac.uk part, (and the http:// part which no one ever types of course), and just type go/whatever in to your web browser. E.g. go/its, go/maths, go/chemistry, go/blogs. go urls can also be appended to so the url for many pages can be shorted to some extent even if there is no go url specifically for that page. E.g. http://www2.warwick.ac.uk/services/its/servicessupport/ can be shortened to http://go.warwick.ac.uk/its/servicessupport

A while back I had the thought that it would be nice to be able to quickly and easily find out if there is a go url for whatever page I happen to be looking at. The other day it occurred to me that it was probably possible to do this using Greasemonkey. The result is a script I call go.warwick.ac.uk? (here) that discretely adds the word 'go?' to the top right of any webpage with an url beginning www2.warwick.ac.uk. Clicking on 'go?' finds a shorter url for that page starting with go.warwick.ac.uk.