This entry is back to the subject of linked lists. In the previous post on linked lists we described the idea of a linked list and how you created one. In this post I'm going to talk about how you remove items. The idea is pretty simple, to remove item "n" you want item "n-1" to believe that the item after it is now item "n+1" and you want item "n+1" to believe that the item before it is item "n-1". There are a few wrinkles to deal with if the item is at the start of the list (recall that this is usually called the `head` element) but mostly the idea is this simple. This is most easily shown by a code example recalling the definition of linked list items from part 1.

This routine removes an item from a linked list and deals with changing the head of the list to match if needed. After the item is removed from the list it is deallocated. You might not want to do this automatically when an item is removed from a list (you can have multiple lists and freely move items between them) but you do have to do it when you are finished with the item or you will have a memory leak. One of the downsides of linked lists is that since they involve direct pointer operations in normal use memory leaks are a greater risk than in many data structures.

You can also see what's going on in a diagram showing how you remove both a "normal" and a "head" item from the linked list. In both cases links shown in green are new links and links shown in orange are links that are being deleted or changed. 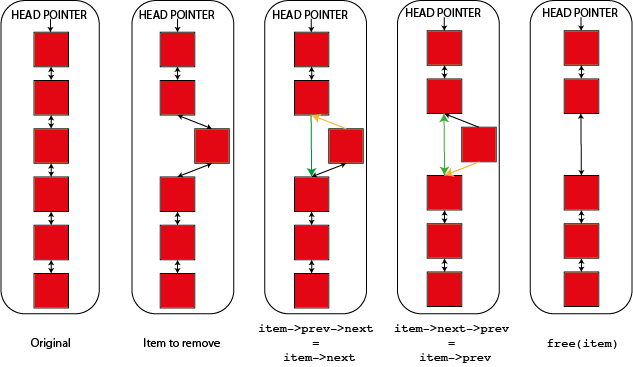 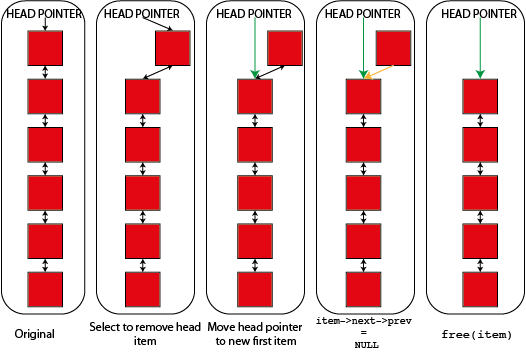 Hopefully the idea is quite clear between the code and the diagrams. If "item" is item "n" in the list then "n-1" is item->prev and "n+1" is item->next. Either or both of these items may not exist if "item" is either the start or the end of the list so you have to cope with these cases. So to update the next element of "n-1" you have to set "item->prev->next" which looks a bit odd but makes sense if you unpack it. Similarly the "prev" element of "n+1" is "item->next->prev".

You will notice that the links on the item being removed aren't touched and the code simply relies on that item being deleted immediately. In a system where you want to retain an item (perhaps to add it to another linked list) you'll probably want to nullify it's prev and next pointers after you remove it from the list.

That code will remove any item from the linked list that it is in. There is however a problem if you have multiple lists, each with it's own head element. Imagine that I tried to use that "remove_item" function where I passed it an element from one list but the head from a different list. So long as "item" isn't the first item of the list that it is in then nothing would go wrong but as soon as it is it would replace the head of the second list. This would cause real problems

This type of error in a linked list thus causes memory leaks, segmentation faults and data corruption all in one nice package so you have to be careful to avoid it. You can program in safeguards to prevent doing things like this but they do slow down the operation of the linked list and require extra memory (as well as making rather harder some nice tricks that you can do with linked lists that I'm not going to talk about here) so many working linked list implementations don't bother. You can see graphically what's happening here too.

Mostly linked lists in operation are stable and reliable but it is possible to get yourself into a bit of a tangle. But you can immediately see that this makes is a lot easier to remove an element from the middle of the linked list than if you had an array. If you had an array then you'd either have to flag that item as "invalid" somehow to know that you shouldn't use it anymore or failing that actually copy all of the elements in your array above the item being removed down to fill the gap. The first one adds complexity and means that you can't actually reduce your memory footprint when removing items (not quite true if you use an array of pointers to items but that's even more complicated) while the second is quite often very slow. This is especially true if you use a library that guarantees contiguity of the elements of your array after every delete operation when you are deleting multiple items (e.g. std::vector in C++. This behaviour is generally an advantage but here is a cost. You can get around it in other ways in C++ but other libraries are less flexible). The cost is managable if you delete many items and then pack the array up but packing after every deletion can be very costly.

The next entry in this section will describe adding items to a linked list which, as you might imagine, is quite similar to deletion but in reverse.