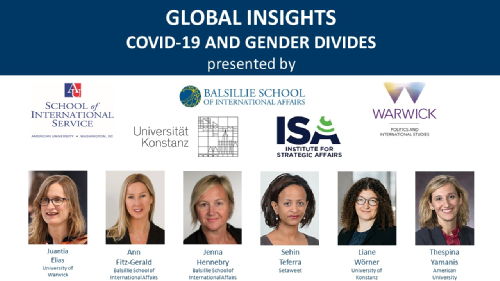 COVID-19 has exposed the deeply gendered inequality that defines many aspects of our society. The burdens associated with everyday tasks like caring, maintaining and provisioning for the home have multiplied for women. The panel consisted of five female professors all with specific qualifications in different gender studies, all of whom are working full time. Their reflections are thus both professional and personal.

Broadly speaking, what has the pandemic meant for women’s rights?

COVID-19 has had a dramatic impact on women across the educational, professional, and personal spheres. On the one hand, the pandemic has allowed for widespread recognition of the key roles that women play in the economy, paid and unpaid work, and greater attention to female leadership. However, the pandemic has also exacerbated gender inequalities, as we have seen women’s double day in paid and unpaid work significantly exacerbated, the re-entrenchment of gender roles and heightened gender inequality, and increase gender-based risk with a rise in domestic violence. Studies have already shown that mothers have spent 36% more time with their children during the pandemic, whereas fathers have only spent 9% more time. Given that men generally earn more due to the gender pay gap, many families have to choose economic stability thus requiring the woman to stay at home. The pandemic has also limited female participation in the labor force, particularly for women who have children, many of whom may permanently exit the labor force. In low and middle income countries, girls education is at risk and food-security is a particularly significant concern. In Ethiopia for example, 36% of women work for pay while women and girls are primarily responsible for securing food and water, both of which are in high demand due to the stay at home orders and increased hygiene.

Some commentators have called the economic downturn a “She-cession”? What is the impact in terms of economic equality and participation?

Income inequality rises for five years after a pandemic. In the U.S. female unemployment has exceeded male unemployment, which differs from the Great Recession of 2008 because many women are in jobs that require face to face work. In terms of professional participation, women are under increased pressure to do the triple burden of childcare, work, and societal care. Some evidence suggests that female business owners are not taking advantage of the payment protection program. In the academic sector, for example, women’s journal article submissions have declined significantly, and women are often expected to reduce teaching and project responsibilities in order to care for their families. In the Global South, we will see low-income households seeing worse effects as women are called upon to serve as a caregiver and exit the labor market. Many women participate in the informal sector, meaning that they do not have social protections such as unemployment benefits or social security. With respect to gendered migration and remittances, countries in the Global South are already feeling the effects of this. Ethiopia receives more money in remittances than exports and foreign direct investment. In the UK, the social care sector for the elderly has been catastrophically impacted by UK government austerity policies since the 2008 crisis. Such policies have decreased funding in the sector, further deterioration of work conditions, increased privatization, and reliance on women to take over unpaid care work. The policy response has centered on the response to the National Health Service at the expense of the social care system, for nursing homes, special needs care, and childcare. This has disproportionately placed ethnic minority women and migrant women, who make up the majority of employees in the sector, in a particularly vulnerable position due to low wages and exposure to COVID-19.

How is the pandemic affecting women’s physical and mental security, as well as other health outcomes?

The pandemic has had a significant impact on women’s physical and mental security around the world. In Ethiopia, for example, child marriage is on the rise since the closure of schools in March. Families who do not wish or are unable to spend money on their daughters arrange such marriages as children are no longer in school. According to UNFPI, women represent 70% of health and social sector globally. Their work environments already expose them to increased risk in the workplace and in the home. COVID-19 related deaths are higher among healthcare workers and those caring for people with COVID-19, who tend to be women. We must also consider indirect deaths due to COVID-19, as people not going to the doctor for normal chronic conditions, or providers who have to shift to pandemic response and are not available. As in the case of Ebola in Sierra Leone, there is potential for a decrease in vaccination rates, an increase in facility maternal mortality ratio, and an increase in teenage pregnancy, all of which occurred during the Ebola outbreak. Even further, there is a high likelihood that we will see a decline in ability to control HIV, particularly in countries that are heavily impacted by HIV, in Sub-Saharan Africa, where girls have 2-3 times more cases than men.

Women’s shelters have been closed during lockdown measures, help lines were unavailable, and many female police officers, who play an important role in cases of gendered violence, are home taking care of their own children. Initial studies show that women have been less likely to call the helpline or shelter due to a fear that they will not be answered. Additionally, gender inequality is part of a wider tapestry of injustice, as such we can’t just look through the gendered lens. In the UK and the USA, Black and minority ethnic groups are more likely to die from COVID-19, exemplifying COVID’s deeply entrenched impacts reflecting societal inequalities. How do you stay at home if you don’t have a home? How do you stay at home if you are a migrant worker far from home? Marginalized groups have not gone away simply because of the virus, and in many cases are particularly impacted due to misguided responses to the pandemic.

What might the pandemic mean for feminism going forward?

COVID-19 is both a challenge and a chance for feminism. As we have seen, countries with female leaders have been extraordinarily successful in pandemic response like Angela Merkel in Germany and Jacinda Arden in New Zealand. Rethinking gender roles on behalf of men and women is important and indicates the value of, and care for, everyone. However, the pandemic does not bode well for women in political positions of leadership, as women can’t take on new responsibilities while caring in the home. Governments must ensure that women’s voices are heard and women’s ability to engage in participatory decision making in all areas of government is not further constrained. When we look to gender and sexual orientation, transgender people face a panoply of difficulties. As we’ve seen across sectors, vulnerable communities are made more vulnerable by the pandemic. People who identify as transgender may be reluctant to seek healthcare if it is not their normal healthcare provider, gender reassignment surgeries may have been halted, hormones which need to be taken on a regular basis may have been altered (physical and mental health). Transgendered people face more homelessness, and many may not have a safe place to stay. May experience more discrimination within employment and are over-represented in sex work. Gender, of course, is not just about women. It’s about a whole range of intersecting identities and precarities. Some of which are about social norms, others about the treatment of populations.

1. Reinvest back into public infrastructure for social provision, which includes childcare, parental benefits, among other things. These provisions must be available not only for citizens but those without documentation status and in informal work sectors.

3. Invest in childcare and elder-care to create a sustainable social infrastructure in which gender inequalities can be properly address.

4. Do not turn away from global human rights agreements and instruments that are trying to move forward (SDGs, Global Compact for Migration, Gender Responsiveness, Beijing Platform etc.)

5. Engender the response in real time, not afterwards.