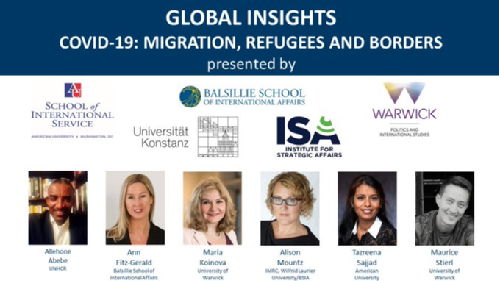 This post is part of a larger collection covering the Global Insights webinar series, hosted jointly by Balsillie School of International Affairs (Canada), the Department of Politics and International Studies at the University of Warwick (UK), the Institute for Strategic Affairs (Ethiopia), American University’s School of International Service (USA), and Konstanz University (Germany). Global Insights webinars take place every Thursday at 16:00h (BST). You can access a recording of this week’s webinar here.

Although the swift closure of borders due to the COVID-19 pandemic shocked many, such closures were a familiar reality for many refugees, displaced people, and migrants. In the past year prior to COVID-19, over 70 million migrants (including refugees and internally displaced people) moved around the globe. Meanwhile, international organizations adopted two global compacts, with varying degrees of success and implementation. COVID-19 has changed the landscape for people on the move in a multitude of ways.

What was the situation for migrants and refugees like before COVID-19?

Before the outbreak of COVID-19, the situation for migrants, asylum seekers, refugees, and internally displaced people was dire. Only 1% of displaced people have access to resettlement, demonstrating that for many people on the move, national borders were already closed. For some, the Global Compact on Refugees and the Global Compact for Safe, Orderly, and Regular Migration, published in December 2018, served as symbolic markers of change, however for others selective or minimal enforcement has yielded little concrete change and questions surrounding accountability remain. The compact is non-binding, as nation-states continue to be the bodies that enforce the compact, making implementation uneven. The Global Compact for Migration advocates for “safe, orderly and regular migration,” however nation-states continue to use deterrence methods that paradoxically make migration unsafe and disorderly and provide very few legal paths for movement. While both global compacts served as an achievement and recognition of current challenges, it failed to implement the basic human rights, non-discrimination, and gender responses. The compacts focused on state perspectives rather than the perspectives of people on the move. In doing so, it neglected the rising xenophobia and vilification of migrants and refugees, which warrants a legitimate human rights response.

How is COVID-19 affecting migration globally and in different parts of the world?

The pandemic has illuminated and exacerbated the stark inequalities present in the world prior to the outbreak. In an extreme sense, as millionaires escaped to private compounds, those that were already displaced or seeking protection were driven into more precarity. Those seeking protection or entry however, are forced into more fragile situations, demonstrating how the pandemic has affected people very unequally. For example, Qatar has barricaded migrant labor work areas, called “Cordons Sanitaires,” creating unequal conditions for migrant workers and others. People have framed migrant health-workers as heroes, but society has not acknowledged the plethora of other essential migrant workers, like agricultural workers. For example, while most flights remained grounded the UK considered chartered flights to bring agricultural workers from Bulgaria and Romania, and other places, to bring people and expertise to support agricultural flow and production in the UK. Meanwhile, European countries have misused the pandemic to impose further restrictions on movement, particularly in the Mediterranean. For example, the Maltese government continues to intercept migrant boats and direct them back to conflict-ridden Libya, breaching human rights and maritime conventions. However, Europe remains silent about these violations at the external borders of Europe.

What does COVID-19 mean for the protection of refugees?

The so-called refugee crisis of 2015, which is perhaps more accurately referred to as a European governance crisis, obscured the history of refugee movement and placed the focus on Europe alone as a refugee reception destination. However, countries in the Global South historically and contemporarily continue to see the largest flows of refugees, rather than countries within Europe or North America. Despite the focused attention on the Global North, the top refugee-reception countries, like Lebanon, Jordan, Turkey, and Pakistan are in the Global South. COVID-19 creates a different dynamic of emergency, people are both being forced to flee, whether related to COVID-19 or otherwise, meanwhile border restrictions are increasing forcing people to cross highly-militarised borders. In Africa alone, there are over 7.8 million refugees and an estimated 90 million internally displaced persons (IDPs), which presents an immense challenge. Key protection issues have arisen such as: diminishing asylum, the closure of borders, and a crisis of education. Principles that have come to define life during the pandemic, such as rigorous hygiene care, teleworking and online schooling, are often not easy to access from a refugee camp. This lack of access generates knock-on effects like lack of nutrition for children unable to attend school and thus unable to get meals. For refugees outside of camps, who may be residing ‘illegally’ in difficult conditions, accessing healthcare is feared as entailing potential detainment, presenting another set of challenges.

Similarly, detention centres represent threats to hygiene and medical care. Prior to the pandemic, immigrant detention had proliferated across the globe in a variety of forms. When the outbreak took hold, governments provided a panoply of responses in their decision-making processes. Within facilities, physical distancing is nearly impossible, personal protective equipment and testing are unavailable for both detainees and staff. Some governments, such as Canada, which held very few immigrants in detention, have released individuals in detention. Others, however, such as the United States, have used the pandemic to further detain and deport quickly, holding over 38,000 people in detention in March 2020. Large crowded facilities have seen significant outbreaks, such as Otay Mesa Detention Center in San Diego (U.S.), where Carlos Ernesto Escobar Mejia became the first person to die in immigration detention from COVID-19 on May 7. One can also point to the ‘floating’ detention centres near Malta, where currently about 425 people who fled from Libya are still held by Malta, now for about 5 weeks and without the ability to claim asylum.

What effect is the crisis having on border controls?

On one side, governments have used the pandemic to exacerbate human rights violations and fortify hostile practices. However, at the same time, the pandemic has made migrants more visible. For example, at the Croatian border, border police marked the heads of migrants with spray painted crosses, presenting migrants as objects to be categorised. Meanwhile, the dialogue surrounding migrant health workers in the National Health Service in Great Britain has rendered migrants more visible and their contributions and presence more important. Governments have used moments of crisis to further enforce limitations on migration and asylum. 160 countries have put restrictive border closures into place since the pandemic began, and more than 50 of them did not make an exception to refugees in such closures. Countries in the Global North are effectively containing people displaced in the Global South 84% of displaced people remain in their region of origin. The European Union and the United States dominate in ‘sophisticated’ fortifications and use technological advancement of biometric surveillance that supports the wall-building enterprise. Although there has been extensive action in the Global North surrounding walls and fortification building, the literature does not support connections between migration patterns and physical borders. Walls do not deter migration, but in fact render mobility more difficult and expensive, leading to an expansion of human smuggling, trafficking, vigilante groups, visa overstays, environmental destruction, and lost lives. In addition to such dangerous physical borders, countries have implemented bureaucratic and external borders, such as third country gatekeepers as we see with Morocco for the EU.

Despite the current restriction on movement around the globe, people will not stop migrating. Tools of global governance to ‘manage’ migration are highly reactive in response to crises. Border externalisation and securitisation of the sea, two concerning trajectories in migration governance have already grown since the outbreak of the pandemic. The border externalization process, in which European countries outsource border control to non-democratic regimes, contributes to increased militarization and ‘militia-ization’ of border control. Governments in Turkey, Morocco or Libya are intercepting hundreds of migrant boats on behalf of Europe, often in close coordination with EU authorities. EU border externalisation in the Sahel serves as a noteworthy example of such practices. In places like Libya, Sudan and Niger, not only state authorities but also sub-state forces, including rebel groups and criminal networks, profit from Europe’s border externalisation process, and become involved in the deterrence and containment of migrants.

Securitisation of the sea, in Malta for example, exonerates nation-states from responsibility for migration management and blocking NGOs from intervening in many cases. Despite obvious negative and alarming impacts, the pandemic also provides an invitation to step back and look at the big picture. For example, as countries rethink elderly care, they may also rethink refugee management and resettlement. In what ways are existing policies causing harm. Where do people who are resilient continue to go to survive, seek livelihood, seek protection?

• Do not rely on border externalisation and third-party agreements (whether with sovereign states or militias) to have responsibility over migration control as it most often leads to human rights violations and unnecessary deaths. Instead the focus should be on allowing safe passage of people in need of protection.

• As you consider solutions, take all forms of forcible displacement into account (including de jure and de facto refugees and Internally Displaced People). Furthermore, recognize that most of the world’s refugees live in informal settlements, not camps. As such, greater attention needs to be paid to their agency, leadership and perspective when considering solutions.

• Take diasporas seriously as an actor embedded in global processes (apart from their cherished remittances) and engage them in new institutional arrangements rather than ad hoc forums, to coordinate transfers of finances, expertise, and more.

• In the realm of research, take a step back to look at the big picture and ask questions about demographics, gender, and ways in which resource access has shaped individual realities. Consider to what extent existing policies are effective and how actual movement can be brought into better alignment with demand in labor markets.

• Show leadership and solidarity with international human rights law and refugee law and offer greater opportunities for refugees and asylum-seekers to engage with, lead in, and be supported for solutions that directly impact their lives.

Any solution needs to consider their perspectives, experiences and context. Furthermore, it is critical to keep in mind that most of the world’s refugees also do not live in camps—many live in informal settlements, in semi-urban and densely population urban centers in close proximity to a country’s urban poor and its internal migrants, and at times with stateless populations. Greater attention needs to be paid to the needs and agencies of these different groups and more attention needs to be paid to context, and solutions need to incorporate the experiences, perspectives and local leadership of these communities.