All entries for Wednesday 21 October 2020

Intimacy and Mobility in Empire: Black Experiences and the Metropole

In the second blog accompanying the At Home In Empire: Colonial Experiences of Intimacy and Mobility conference, Hannah Dennett examines how the records of the Foundling Hospital can highlight black experiences of intimacy and mobility in eighteenth-century London.

For many white British people scattered throughout the colonial world of the eighteenth century, returning ‘home’ to the metropole was their eventual aim. People, such as East India Company officials, civil servants, plantation holders and military men, who spent periods living and working in the East Indies and West Indies, returned ‘home’ to Britain after services had been fulfilled or fortunes made. The movement of these white British individuals and families between colonial holdings and Britain also precipitated the movement of people of colour owned or employed by them. Enslaved or indentured domestic servants brought to England from the East Indies and West Indies contributed to the growing population of people of colour in Britain during this period. In this blog I highlight how records from the Foundling Hospital of eighteenth-century London offer us a window into some of the lives of these people of colour, often hidden from view because of the lack of sources relating to their experiences.

Established in 1741, the Foundling Hospital took into its care infants from mothers either unable or unwilling to provide for them. From 1763 mothers were required to submit a petition to the Foundling Hospital General Committee as part of the admission process. Most women petitioning the Foundling Hospital were young, unmarried mothers, predominately working as domestic servants. Consequently, in almost all cases, an illegitimate child left the mother economically vulnerable and socially marginalised. Amongst these petitions it is possible to find some which suggest a child was an infant of colour, and this allows us to start examining the experiences of their mothers in London during this period. 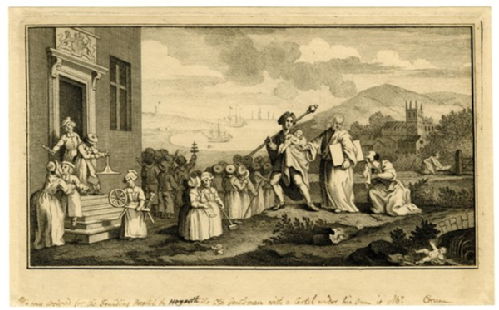 William Hogarth, 1739. An etching and engraving of children at the Foundling Hospital. ©The Trustees of the British Museum.

Lucy Strange submitted a petition to the Foundling Hospital Committee on 17thNovember 1773 to have her one-month old son admitted. It reveals that she was ‘born in the East Indies and was sent to England by her master with the care of a child’. During the voyage she was ‘Debauched and got with Child’ (Foundling Hospital, 1773). The suggestion here is that Lucy was acting as nanny, or ayah, to a child of a white English family living in the East Indies (Visram, 1986). Many families sent their children ‘home’ to England and into the care of extended family members to receive an English upbringing and education. They were often accompanied on the voyage by indigenous servants, and this seems to be the reason for Lucy’s presence in London. It appears that Lucy was raped during the voyage to England, demonstrating that movement between the colonies and the metropole placed Lucy in a vulnerable position, which ultimately resulted in sexual violence. Unmarried, pregnant and in a foreign city, she was further marginalised by her lack of understanding of the English language. It is not clear how Lucy found out about the Foundling Hospital but when her son, Christopher Rowland, was admitted into the institution it would appear the difficulties she faced were resolved and she could return ‘home’ to her master in the East Indies. 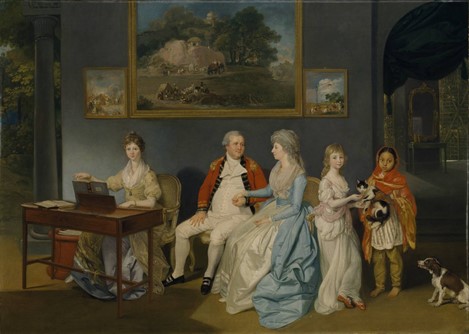 The return to England of Captain Grenadire and his family from Antigua impacted the circumstances of his servant, Henrietta Dislie. Before her departure from Antigua with her master, Henriette failed to disclose that she was ‘with child by a European, a Clerk to a Store keeper in the said Island’. She was ‘delivered on her passage of a Male Mulatto Child’ (Foundling Hospital, 1780). (Subsequent records of the Foundling Hospital reveal that Henrietta had a daughter, not a son). We do not know if this is another example of sexual violence or if some sort of relationship existed between the clerk and Henrietta Relationships between white men in power and enslaved black women were common in the Caribbean at this time, but this did not necessarily mean they were wholly consensual (Livesay, 2018, pp.3-4). If Henrietta’s application to the institution was unsuccessful, her petition states she was to be discharged from her position; her only security in a country where she was without any support networks to drawn upon. From the available documents it is unclear what Henrietta’s status was, as enslaved black individuals brought to England from the Caribbean were often referred to as servants. However the threat of losing her position suggests that Henrietta was a free black woman. Henrietta’s daughter, Jane Eyre, was admitted to the Foundling Hospital on 6th December 1780, aged ten weeks, and this allowed Henrietta to retain her position in the service of the Captain’s family.

Other examples within the petitions reveal consensual relationships between white women and black men living in Britain during this period. The black population is estimated to have reached approximately 10,000 in the eighteenth century, including free black men (and some women) who had made Britain their home (Shyllon, 1977). These individuals were sometimes enslaved domestic servants who had been granted manumission, sailors who worked the ships travelling between the metropole and the colonies, or runaway slaves who had evaded recapture. Susannah Wright petitioned the Foundling Hospital to have her daughter admitted in June 1804. She states that ‘your petitioner was seduced under a promise of Marriage by a Person who on finding your petitioner pregnant deserted her’. That person was George Clark, a fellow servant of Susannah’s and a ‘Man of Colour’ (Foundling Hospital, 1804). Sexual encounters or courtships between servants in the same house appear frequently in testimonies of women with illegitimate infants who petitioned the Hospital and Susannah’s story highlights this. Simultaneously, it again reveals an unmarried mother removed from her everyday surroundings and left isolated in an unfamiliar city. Desertion by the father is also a common theme within the petitions of the period and speaks to the relative ease with which even men of the lower ranks could move throughout the country and beyond. Many such petitions mention that the fathers, on discovering an unwanted pregnancy, left for the East Indies, West Indies or America. Such movement disrupted relationships which the young women frequently expected to result in marriage.

The Foundling Hospital provided a resolution to the desperate circumstances in which these women found themselves, as unmarried mothers with new-born infants in an unfamiliar city. But their stories also reveal insights into interracial relationships and sexual violence and the ways in which mobility across the empire perpetuated trauma and dislocations from the familiar which impacted the lives of some people of colour present in London during the eighteenth century.

Hannah Dennett is a PhD student at the Department of History, University of Warwick. Her project Forgotten Foundlings: Black Lives and the Eighteenth-Century Foundling Hospital is in collaboration with the Foundling Museum, London, and is funded through the AHRC’s Midlands4Cities consortium.