All entries for Wednesday 10 November 2021

In this second blog post relating to the HRC conference on 'Following Living Things and Still Lifes in a Global World', the other co-organiser, Camilo Uribe Botta, a third year PhD student in History, explains his own doctoral research and how it links to the theme of the conference.

My thesis investigates the commerce of Colombian orchids in Victorian Britain. During the nineteenth century, orchids became a trendy plant, creating a phenomenon called orchidomania, reminding of the once-famous tulip fever in the Netherlands. Today orchids still fascinate people, and they are plants relatively easy to buy and maintain. Still, in the nineteenth century, orchids were a newly discovered rarity coming from the tropics, scarce to obtain, expensive to buy and difficult to maintain. With a privileged geographic position in the tropics, Colombia became one of the main spots for plant collectors to hunt for orchids. 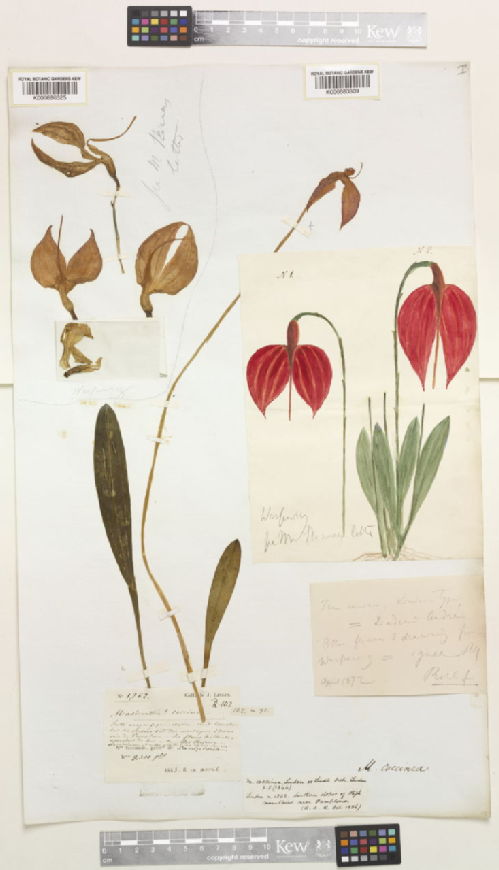 Figure 1: Masdevallia coccinea. http://specimens.kew.org/herbarium/K000880309 © copyright of the Board of Trustees of the Royal Botanic Gardens, Kew.

As more orchids were discovered and new species arrived in Europe, these plants were conceived with different meanings. First of all, they were seen as botanical curiosities as they slowly but firmly gained a place in the British botanic and horticultural world. Then, as knowledge about their habitat and reproduction methods advanced, as scientific objects, they earned a place in the scientific debates in the middle of the century. And finally, as the plant became more popular as a luxurious commodity, being an example of the British imperial project for discovering, classifying and obtaining natural resources around the globe.

But the presence of orchids was not always in the form of a living plant. Many orchids arrived in Britain in the form of herbarium specimens. European herbariums count thousands of orchids collected in the tropics during the nineteenth century, collected for scientific purposes to classify this exciting family of plants. These items, once living plants, are carefully dried, pressed and mounted on a paper sheet and stored in an artificial environment, where the plant can stay still for centuries.

From the very beginning, orchids also appeared in the form of botanical illustrations and works of art. Lavishly illustrated books were published with the most elegant and delicate tropical orchids as part of a broad Victorian orchid literature: horticultural manuals, travel journals, collectors books, novels and short stories represented orchids as exotic, sometimes even dangerous plants. These visual and written representations of orchids were instrumental in popularising these plants in Victorian society beyond the scientific world. 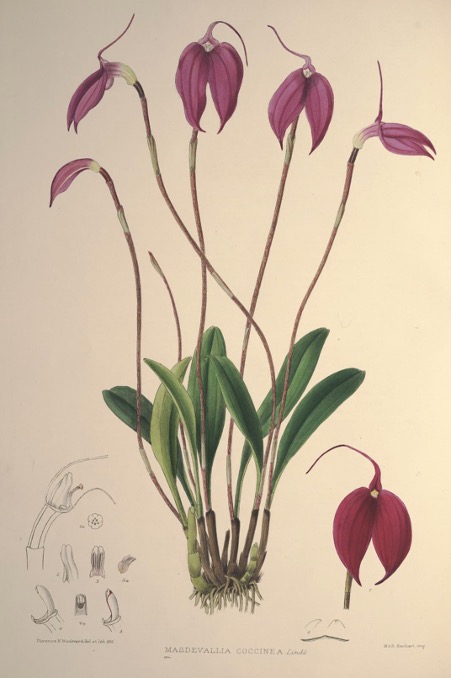 Orchids becoming more famous led to a boom in the commercialization of these plants. Technology made greenhouses more accessible to different segments of society, and orchid hunters were sent to catch plants all over the tropics. More than sixty visited Colombia in the nineteenth century, sending living plants to Europe by thousands where big commercial nurseries were selling them at expensive auctions. This orchidomania had a devastating environmental impact with limited success, as many plants arrived death through hard travel from South America.

These are some of the topics I have been working on in my research. In connection with Cheng's work, we are interested in the material culture approach to the objects of our study. More specifically, we are interested in the layers of meanings things have. These layers of meanings could be defined by the cultural and social contexts these objects belong to. But also as part of their movement in a global world. And these meanings also represent objects in different ways. For example, in my case, orchids as botanical curiosities are more likely to be part of artistic and literary representations, orchids as scientific objects appeared more in herbarium specimens and orchids as commodities appeared more as living plants. And I think not only plants were considered in this way, but exotic animals and even people sometimes had a variety of meanings when we follow them across the world from different geographical, social and cultural contexts.