All entries for October 2021

In this first blog post relating to the HRC conference on 'Following Living Things and Still Lifes in a Global World', one of the co-organisers, Cheng He, a third year PhD student in History, explains how the theme of the conference links to her own doctoral research.

My thesis on lacquer centres around people’s understanding of this material in early modern England. Today lacquer means a kind of sticky liquid applied to the surface of objects. It forms a shiny and protective layer after dried. The word is often interchangeably used with ‘varnish’. Lacquer can also refer to varnished objects. In museums and stately houses, we can often come across lacquer furniture such as cabinets (Fig. 1), folding screens, or smaller objects including tea caddies, writing boxes, etc. Some of them were made in Asia and brought to Europe through maritime trade since the sixteenth century. Some were locally made to imitate Asian lacquer, whose smooth and reflective surface was highly praised in early modern period. 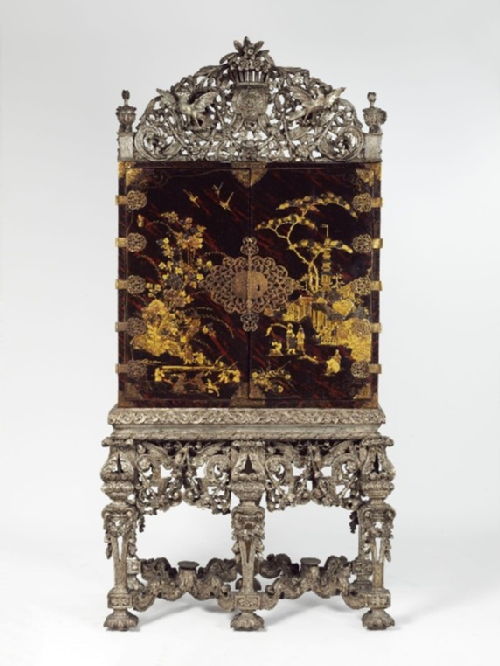 When I was considering about the specific topic of my doctoral research, my focus was actually on the export lacquerware made in China. I thought it would be interesting to trace how these objects were designed, made and received by European collectors. This topic is still attractive to me, which would be fascinating to pursue. However, when I started to write the research proposal and looked up the word ‘lacquer’ in a dictionary, I was surprised to find that the first meaning of the word was not varnish nor varnished objects. Instead, the word has a long history with different meanings.

Therefore I realised that it was not proper to have a presumption about the definition of lacquer, especially if I wanted to study how this material was perceived by early modern people. I took it for granted that ‘lacquer’ had exactly the same definition as it does today. But the meanings of lacquer in early modern period were not just about a craft but also the plants that produced the raw material for making varnish. Then there was another question: when did the line between craft and raw material, between artificial and natural lacquer become clear in this case? Was it a smooth process?

If the meaning of lacquer was not settled, and when there was more than one type of raw material to be used for making varnish, did people differentiate them and how? In addition, varnish was not a processed material that can only be find in one geographical area, but also in many places all over the world, then did the definition of lacquer change because of the diversity of the raw materials? Was there any hierarchical ranking of these materials? Would this affect how people understood lacquer objects?

Above are some questions that I’ve been working on in my research. I believe lacquer is not the only material that is worth similar questioning. When placed in a different time period, the understanding and definition of a material could be different. This may include a less clear-cut conception between a natural material and objects made of this material. Moreover, if its raw material or related craft can be found in different parts of the world, the understanding of an object could be more complicated. Based on this, we can ask if a material was thought to possess the same identity after being transferred to a different region, processed into other objects and represented in a different form (like a print or painting), since this was associated with its interpretation. In this sense, can we say a still material is ‘living’ because its identity and cultural meanings are constantly changing?

In short, unstable identity and categorisation of a material is one aspect that led to the topic of this conference. When a material and the knowledge of it spread and interacted with each other, the story might be intricate and yet rich. In next blog entry, my colleague Camilo will talk about his research, which shares certain common ground with mine and at the same time provides other elements to the conference topic.

Cheng He (PhD student in History)

The Supernatural: Reflections on Research

To accompany their The Supernatural: Sites of Suffering in the Pre-Modern World conference, HRC doctoral fellows Francesca Farnell and Imogen Knox will be blogging on their own research, the conference themes, and the process of putting together a one-day interdisciplinary conference. In the first blog, Francesca and Imogen reflect on their respective research interests and how they relate to the conference.

The supernatural is, scholars argue, a form of religious discourse that allows individuals to express ‘otherwise unspeakable fears’.[1] Subsequently, supernatural narratives are inextricably tied to different modes of suffering, giving voice to things like mental anguish, bodily pain or collective social anxieties that people had no other means of expressing. By way of introduction to our conference, today’s blog will reflect on how our respective doctoral projects and wider interests intersect with its core themes, that of the supernatural and suffering. As our shared interest in these themes has encouraged us to work closely alongside one another, in hosting an interdisciplinary conference around them we hope to weave together even more strands of research into the supernatural to provide a greater appreciation of how suffering has been represented in a multitude of mystical, magical and metaphysical ways across the pre-modern world. 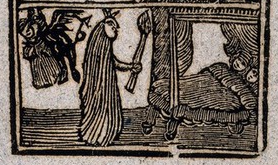 Francesca’s interest in ‘the supernatural’ began during her undergraduate degree at Warwick when she wrote an essay on Elizabeth Barton, an illiterate domestic servant turned prophet of God, whose opposition to the Henrician religious reforms looked to threaten the whole regime. From then on, Francesca consistently combined her fascination for the popular religious belief systems of early modernity with her passion for the study of women and gender, culminating in her current doctoral studies at Warwick. Her PhD thesis uses the supernatural and other mystical phenomena to explore female experiences in post-Reformation England.

Supernatural tales abound in this period and in offering a thorough-going gendered analysis of the fantastical reports of ghosts and fairies, the legal records of witches and wise-women, and the remarkable narratives of demoniacs and prophets, Francesca seeks to demonstrate how such ‘extraordinary’ sources may shed new light on ‘ordinary’ women. From the inner lives to the outer worlds of women, her research explores themes of embodiment, motherhood, sexuality and marriage, religious conflict, socioeconomic and political participation. In studying these disparate themes under the unifying lens of the supernatural, Francesca seeks to underscore the multifaceted ways in which women’s thoughts, feelings and experiences found alternative outlets. The theme of suffering routinely intersects with Francesca’s work, from the corporeal torments of women demoniacs to the emotional anguish of mothers who blame purported witches for the death of their child. More generally, religious suffering, such as self-mortification and ‘anorexia mirabilis’, is of particular interest.[2] 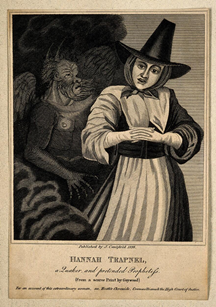 Hannah Trapnel, a Quaker and a pretended prophet (1823), Wellcome Collection

Imogen’s fascination with the supernatural also started during undergrad studies at Exeter. After studying the witchcraft of early modern Europe, and broader supernatural phenomena of England, she became interested in the taboo behaviour of possessed and bewitched children. Like Francesca, Imogen’s research employs stories of the supernatural to uncover experiences otherwise obscured from the historical record. Her thesis explores suicide and self-harm in Britain, between 1560 and 1735, and uses accounts of encounters with witches, devils, ghosts, fairies, and other spirits.

Traditionally, the history of suicide is studied through coroners’ records produced in the aftermath of such a death taking place, but in using the supernatural, Imogen may access the experiences of people who considered, and even attempted suicide, but did not necessarily take their own lives. This work also engages with the emerging historical field of self-harm, exploring the permeable boundary between fatal and non-fatal self-injurious acts in the early modern period.

Witches and demons regularly tempted individuals to harm themselves. Even in meeting ghosts, fairies and other seemingly less threatening spirits, people could be so affected that they became suicidal. The experience of temptation, and the feeling of despair, are crucial to suicidality in these contexts. Imogen’s work views the supernatural as a means through which early modern people could articulate and work through suicidal feelings, without being received as mad or sinful by those around them. Thus, her work ties the supernatural with both emotional and bodily suffering. 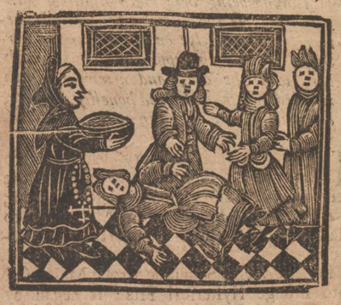 After beginning our PhD studies as part of the same cohort and even sharing a supervisor at Warwick, we quickly discovered the significant crossover in our research: our projects employ the supernatural as a means of uncovering obscured voices, and view it as a further means to express or alleviate various forms of suffering. Crucially, our aim in this conference is not to exploit or sensationalise narratives of suffering, but to restore dignity to the people and the stories we discuss. The HRC’s doctoral fellowship is therefore the ideal opportunity to unite our projects and furthermore provide an exciting platform for fresh perspectives in the broad field of the supernatural.

Both our research focuses on the early modern period in Britain, with our work spanning the mid-sixteenth to the early-eighteenth centuries, however our conference is designed to reach beyond this scope. We will be inviting participants to present work pertaining to our themes from any ‘pre-modern’ temporality and geographical context (topics which we’ll be exploring in our next blog post).