Another fairly simple data structure this week - the stack. The stack is basically the reverse queue. Rather than the first item to arrive being the first to be served as with a queue in a stack the last item to arrive is the first to be served. The name comes from the idea of a stack of paper where you add pages at the top and then take them off the top again when you want them. Formally this behaviour is called LIFO (Last In First Out) as opposed to the FIFO (First In First Out) queue.

You'll notice that pop and push are inverses since pop removes the top element from the stack and gives it back to you. This isn't always what you want since you might find that you have to simply push the element back onto the stack if you can't deal with it yet. To make this easier a lot of stack implementations also have a snoop operation which tells you what is on the top of the stack without actually taking it off. What you never have in a true stack is a way of accessing an arbitrary element in the stack. If you can do that then you have an array that you are accessing in a "stack-like" way. This is also something that people quite often want to do, so you find that lists in Python have a "pop" method to remove the rightmost element (although the equivalent of "push" is called "append" for a Python list, probably because it is used for a lot more than making stacks). 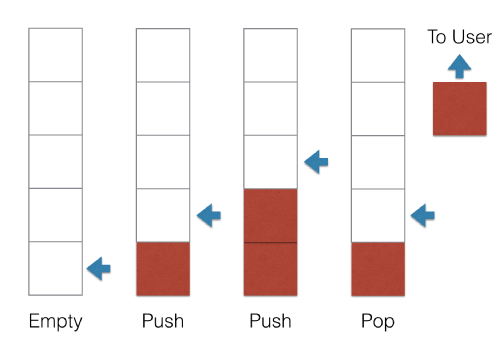 This will all work perfectly well until you run out of space in your array when, much as with the queue, you have to do something else. You can reallocate your stack to give yourself more space, copying the existing elements as you go, you can implement a stack using a linked list (which we will cover in a later post) which means that you won't run out of stack until you run out of memory or you can refuse to accept the new item an return an error. If you do nothing and accept the new item you access memory that you are not supposed to be using at all which can cause all kinds of problems from crashes to possible security exploits and this is called a buffer overrun, which might be familiar with as one of the most common things that are listed as the cause of security problems in software.

At this point it is worth drawing a distinction between the stack as a data structure and all of the other things that are called stacks. There are call stacks that were mentioned in the last blog post which described how a program got to be in the place where it is and there is an associated CPU feature called a "stack register" that holds this information. There is "stack memory" which together with "heap memory" make up the most common way of dealing with memory management in compiled codes and there are plenty of other stacks that turn up all over the place. In general they get the name because they implement a stack data structure (sometimes they used to be a stack back when the name was given to them but no longer do) and otherwise are not really related. You have to be rather careful because lots of things are called stacks and that name itself doesn't alway tell you very much. Always read the documentation!

A question that might come to mind is "what would I ever do with a stack?" They do seem rather less use than a queue and in practice they are mostly fairly "low-level" data structures that most people don't encounter much, but you can easily enough think of cases where they are useful. Their most useful feature is as a "memory" of a sequence of events that can then be undone. Many "undo" systems in software use stacks behind the scenes for exactly this reason. For the same reason they are often used in "depth-first search" algorithms which were first investigated (and still used!) as ways of solving mazes. They also crop up in algorithms to parse mathematical and programming languages (a good example being the Shunting Yard Algorithm, named after train shunting yards. You can easily see the similarity between a stack as described here and a train siding because you can only get carriages off a siding in the reverse of the order you put them in on). But in general you probably won't need to implement your own stacks very often but it is worth knowing about them because they are so ubiquitous in the lower layers underpinning all of modern software development.