COVID-19 and the Crisis of Social Reproduction in the Middle East and North Africa: Implications for Gender Relations and Women’s Activism 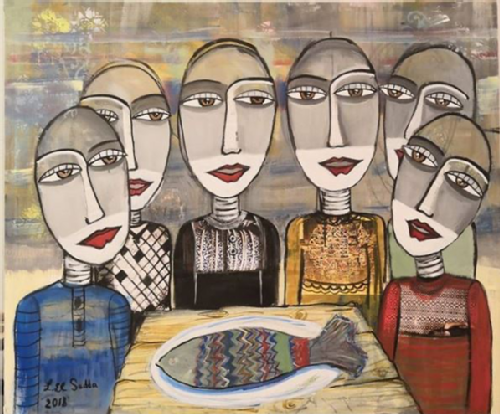 'Fish for Supper' by Laila Elsadda

Countries in the Middle East and North Africa (MENA) have not (yet) been a major hotspot in the global COVID-19 health pandemic. Nonetheless, the region’s economies, already facing a number of challenges, have been negatively impacted by measures taken to contain the spread of the virus, compounded by the wider global economic downturn. Without proper social safety nets, let alone furlough schemes, millions of families in the Middle East and North Africa are facing a loss of livelihoods as a result of lockdown measures. Before the pandemic, 60 per cent of Egypt’s population was either poor or vulnerable. A recent study found that around half of Egyptians have borrowed money and the incomes of 73 percent of Egyptians have reduced since the pandemic. Even before the outbreak of coronavirus, Lebanon was facing an economic crisis. Rising prices, as a result of a collapse in the currency, alongside increasing unemployment, due to COVID-19 lockdown measures, have made even basic food items such as bread unaffordable to many Lebanese. Anti-government protests have continued despite the lockdown as people fear that the economic crisis could be even more lethal than coronavirus. In Jordan, strict lockdown measures have disrupted aid to the 750,000 refugees living there as well as threatened the livelihoods of large sections of the Jordanian population. The UN agency responsible for the Arab region (ESCWA - the Economic and Social Commission for West Asia) estimates that there could be more than 1.7 million job losses as a result of the pandemic, with the services sector, the region’s main employment provider, particularly hard hit. Meanwhile, the risks of the COVID-19 crisis are amplified in Syria, Yemen, Libya and the Occupied Palestinian Territory, where conflict and siege have debilitated the economy and infrastructure.

Whilst the effects of COVID-19 and related measures are most detrimental to the poorest and most vulnerable sections of the population, including refugees and displaced persons, it is also important to understand the different consequences of the crisis for men and women and how this may have longer term impacts on gender relations. As in other parts of the world, COVID-19 is revealing and exacerbating gender inequalities in society. Given that women’s participation in the formal economy in the region is one of the lowest in the world, job losses caused by economic downturn will be experienced mostly by men. However, the contracting labour market will further aggravate female unemployment, which was 19 per cent in 2019, compared to 8 per cent for men. In Iraq, under the sanctions regime (1991-2003), we saw how women’s declining participation in the workforce led to increasingly conservative gender norms (Al-Jawaheri 2008), which, in turn, created longer-term negative social attitudes towards women’s participation in public life. Meanwhile, female headed households, whose number reaches 14 per cent of all families in Egypt, are particularly exposed to economic shocks due to the bias in Arab government policies that assume a male head of household. This not only impacts on the well-being of women but of their families too. In addition, the lockdown has made women, as well as LGBTQ+ individuals, even more vulnerable to violence in the home. One anti-violence NGO, ABAAD, in Lebanon, reports that the number of calls to its helpline in 2020 have more than doubled compared to the first quarter of 2019.

A more hidden impact of the COVID-19 crisis concerns the increased care burdens on women, who are expected, with often no support, to fill in the gaps left by school closures, overwhelmed health systems and lack of state support for combating the virus and its effects. Feminists have termed this unpaid labour conducted within the home and community as “social reproduction” (amongst others, Bakker 2007) and highlighted how women everywhere continue to be disproportionately responsible for it. As in other parts of the world, millions of women find themselves having to home school their children, look after sick relatives, deal with the increased difficulties of shopping for food and other household necessities, even whilst continuing to engage in paid work from home. Already before the pandemic, women in the Arab world were doing 4.7 times more unpaid work than men, the highest rate among all regions globally. Poor women and female refugees shoulder the greatest burdens as they conduct social reproductive work in already difficult conditions (insufficient public services and infrastructure and a lack of adequate housing and sanitation). Whereas middle class women often outsource their reproductive work to low-paid working-class or migrant female workers, the economic effects of the lockdown have made this more difficult, and there are even cases of Ethiopian maids being dumped in front of the Ethiopian embassy in Lebanon because their employers can no longer afford to pay them. Women’s leadership in civil society organizations has also been crucial in responding to the pandemic in an absence of weak state institutions. Alongside this, women, who dominate low paid nursing and auxiliary work in hospitals, are also more likely to be caring for COVID-19 patients and, therefore, are more exposed to potential infection.

Whilst society, in general, often commends women for their sacrifices on behalf of their families, communities and nations, the effects of women’s increased workload on their health and well-being is largely unrecognized. Women are expected to be infinitely resilient and elastic in accommodating themselves to the repercussions of the crisis. Yet, as Shirin Rai et al have argued, without adequate support and replenishment, reproductive work can lead to “depletion”, physically, mentally and emotionally (2014). This is not only detrimental to individual women but also to their families and wider communities. Over the past decade, women have played a key role in demanding change, not only concerning women’s rights but also social justice, sectarianism and corruption, most recently in protests in Lebanon and Iraq. There is a danger that social reproductive burdens as well as depletion through social reproduction may undermine women’s continued involvement in these struggles and their public participation more broadly.

Women activists in the MENA have been outspoken in demanding gender equality in most areas of life, insisting on women’s participation in political transitions, ensuring that women’s rights are at the heart of any agenda for change, and pressuring governments to tackle gender-based violence. However, until now, they have been less vocal in challenging disparities in the gendered division of social reproductive labour, which are underpinned by personal status laws, which, in turn, are governed by religious law. This can be understood in light of the ways in which differential gender roles and inequality in the private sphere have been held up as a marker of national identity and culture, and, in the case of Lebanon, as the lynchpin of the sectarian political system. Political and religious leaders have portrayed any efforts to reform the ‘traditional’ family set-up as ‘Western’ interference in domestic affairs and as a threat to the fabric of society and even the stability of the nation (Pratt 2020). However, the pandemic is bringing into question the sustainability of social reproduction based on the current gendered division of labour and creating an impetus for women, based on their lived experiences, to challenge dominant gender relations in their everyday lives, whether overtly or covertly. This creates a vital moment to open a public conversation about gender roles and relations within the family.

It is not merely a question of persuading men to do more housework but also of ensuring that government policies support a redistribution of social reproductive burdens. Support for social reproduction is crucial to the economic and social recovery from the COVID-19 crisis and is essential to address gender inequality within employment and the economy and to combat gender-based violence. As governments in the MENA region consider ways to address the financial consequences of the pandemic and, towards that end, enter into negotiations with the IMF and World Bank to borrow money, governments need to listen to the voices of women and consider the gendered impacts of any proposed economic measures. Moreover, in a departure from the neoliberal prescriptions of the past decades, there needs to be increased public funding for health, education, housing and care provision to support social reproduction. Meanwhile, taking seriously the socio-economic and health costs of depletion through social reproduction is essential for ensuring women’s continued participation in the ongoing struggles for socio-political transformation in the Middle East and North Africa.