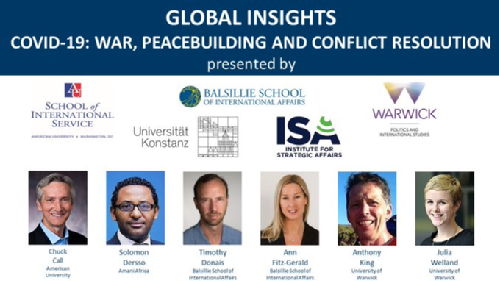 This post is part of a larger collection covering the Global Insights webinar series, hosted jointly by Balsillie School of International Affairs (Canada), the Department of Politics and International Studies at the University of Warwick (UK), the Institute for Strategic Affairs (Ethiopia), American University’s School of International Service (USA), and Konstanz University (Germany). The first Global Insights series has finished, but the webinars will resume in September. You can access a recording of this week’s webinar here.

COVID-19 and responses to it have raised important questions regarding the way we understand security, how best to use resources intended to protect civilian populations, and what the effects of the current pandemic might be on conflict globally. The reflections captured here urge us to be cautious concerning some worrying trends connected to global recession, geopolitical tensions, and decrease in resources for peacekeeping.

Broadly speaking, what impact is the Covid-19 outbreak having on international peace and security?

We see some worrying trends and direct impacts of COVID-19 which go beyond health. Fragility is a key concern as the coming global recession will deeply affect the poor and marginalised, particularly with respect to livelihoods and food security. Lockdowns will continue to put pressure on domestic factors and exacerbate domestic social cleavages, as we have already seen in the United States and Central African Republic. In turn, disengagement will mean that important donor countries will be preoccupied with domestic issues to the detriment of international conflict resolution over the coming years. We see this in the Central African Republic, the Sahel, or in Somalia, for example, in which humanitarian activities have already been impeded. Social and socioeconomic fallouts also have serious implications, including reduced remittances, increased food insecurity, and increased levels of corruption. As a result, new sources of fragilities and instability are sure to increase in this context, and we will see an increase in protests and riots, which have already been the most dominant conflict events in various African countries. Climate change combined with confinement make food insecurity a serious problem. Additionally, corruption in places like Honduras and Brazil, for example, may lead to large assistance packages that have little oversight or accountability. In regard to a race and class analysis, across the world we have seen pre-existing inequalities rendered even more visible in conflict and non-conflict settings due to COVID-19. In Sao Paolo, for example, black people are dying at a 62% higher rate than white people.

There will likely be increased geostrategic political tensions as a result of COVID-19 and the economic stresses it will put on the world; however, it’s unlikely that the pandemic will itself cause conflict. Certain world powers, like China, may very well emerge more powerful than before, although the great powers are pursuing responses largely on their own rather than collectively. Indeed, the connection between the role in peacekeeping and role as a global power are not necessarily closely related. Perhaps the pandemic can invite us to consider how we think about security and what that means. When we look at how economic and material resources are distributed on a global level, human security is far less of an imperative compared to state and military defense budgets. In the face of this global health pandemic, it will become harder for states to make the case to invest as heavily as they do in militarism and defense as they do in public health and other sources of everyday people’s insecurity.

What roles can militaries and International Organizations play with respect to containing the pandemic?

The coronavirus pandemic has been framed within a militarised language as we “wage war against the virus” and discuss essential workers as “on the frontline”. However, as feminist and peace researchers have shown for decades, when we militarise something we can end up exacerbating trauma and worsening the effects of a particular situation. We have seen many states using the armed forces to contain the crisis. In the UK for example, where the public sector has struggled, the army has been involved in national testing regimes, delivering Personal Protective Equipment (PPE), and so on. While militaries may provide useful support for a broader inter/national approach to controlling and stopping the virus, that COVID-19 is first and foremost a health – not military – security issue should be borne in mind and an overly militarised approach viewed with caution.

African Union and member states acted quickly, actively, and preventatively. There has been significant coordinated action around PPE availability, testing capacities, and ensuring that targeted support goes to the most vulnerable populations, manifesting acceleration of multilateral cooperation within the framework of the AU. In theory, global crises produce collaborative global responses and multi-lateral collaboration, however that has not happened with the coronavirus pandemic if we look at the global level, which is in contrast to the coordinated continental approach as we have seen to some extent in Africa. The dysfunction between the great powers of China, Russia, and the United States, has not been overcome. The United States’ withdrawal from the WHO has demonstrated that multilateral leadership in the U.S. is disappearing. Industrial powers are looking inward to make sure that supply chains are covered and they will not be vulnerable in the future. We are likely to see a weakened United Nations (UN) in the future, but it may indeed be able to use the pandemic to improve its technological and communicative innovation.

What are the implications for peacekeeping and conflict resolution?

In the immediate future we are likely to see a decrease in political and budgetary will to ensure continued or increased capabilities in peacekeeping. This will contrast with continued or increase expectations of what peacekeeping will be possible and the impact it can have. This is concerning in a context of increased fragilities as highlighted above. The UN is terrified of a repeat of the 2010 cholera epidemic in Haiti, introduced by its own peacekeeping troops. We see a potential move towards socially distanced peacekeeping, which in some ways is sadly ironic given the recent push towards the idea of people-centric peacekeeping, with a greater emphasis on community engagement and civilian protection. Getting peacekeepers out of their armoured personnel carriers and into the community has been very important for the evolution of peacekeeping, but we will unfortunately see less of that for the foreseeable future. Staff will be in the field offices, while military staff will be in hermetically sealed patrols. Peacekeeping will look different in ways that are reverse some of the gains of recent learning.

Several peace operations are already being drawn down, and there is a risk that the disease will undermine the UN’s work. In South Sudan, the government is using roadblocks to control peacekeepers’ movements. Diverse actors can also use the pandemic for political gains at the cost of health. In Somalia there is already a timeline for a peacekeeping drawdown even though Al Shabbab is propagating misinformation and intensifying attacks. The ad-hoc coalitions that have taken form in the Sahel and AU and UN engagements have been severely affected. There have been reports within the AU that some of the countries such as those in the Sahel have to pull back their militaries from these engagements in order for their militaries to provide support for their COVID-19 response measures. We will thus also need to see more effective transitions between peacekeeping and peacebuilding, something which the liberal peace agenda has not easily achieved.

What opportunities and challenges does the pandemic present for international peace and security moving forward, including with respect to peacebuilding, conflict resolution and sustainable peace?

As it is in many sectors, COVID-19 serves as a liminal moment for scholars and practitioners in conflict resolution. We must look at lessons around the world and understand how the diversity of responses have impacted countries and how they relate to our own national contexts. Moving forward, COVID-19 provides an opportunity to reconceptualise the militarised international security agenda and that militarism may not be the ‘cure all’ solution it is often presented as. One concrete step towards a less militarised security agenda would be the immediate halt of all weapons and international arms transfers in line with the UN Security General’s call for a global ceasefire. Taking place against the backdrop of recent weeks in which hundreds of thousands of people across the US and Europe have taken to the streets in protest of the racial and social injustices that structures these societies, it should be clear that a militarised response is inappropriate and insufficient if there is to be a chance at moving towards a more socially just and peaceful global order.

The Black Lives Matter movement and protests in recent weeks, reacting to historic systemic racism, have been tremendously important. However, they are not necessarily causally related to COVID-19. This crisis and the themes it focuses on could lead to demilitarised responses to public safety and open global thinking to demilitarised approaches to national budgets and human security. There are promising alternatives to heavily militarised cultures of policing. We need to see a shift from policing to social services and ensure resources to support local, population led initiatives for conflict mediation. Increased partnerships and attention to the urban domain will be vital, as will a re-thinking of the security model that we employ for thinking about insecurities and injustices both within and between countries.

1. Pay attention to what feminist and critical race scholars have been saying for decades: Listen and lead from the most marginalised and vulnerable positions and do not initiate policies that will exacerbate the traumas they are already experiencing. Look at the Feminist Alliance for Rights statement on COVID-19 policy.

2. In the context of Canada, use this crisis – and the imminent Security Council elections - as an opportunity to commit itself to a full foreign policy review and do a thorough reflection on how Canada can make a real contribution to reducing conflict in the world.

3. Increase negotiations between China and the U.S.A.

4. Involve communities in finding solutions to their problems and ensure inclusive, diverse populations are part of analysis and implementation.