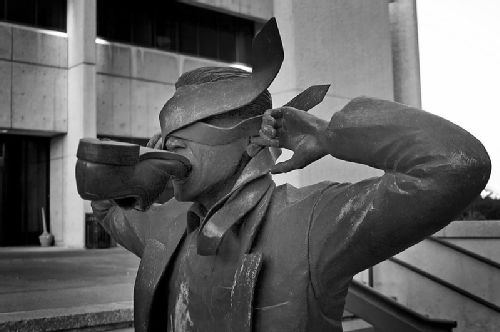 "Modern Communication 02" by ChrisM70 is licensed under CC BY-NC-ND 2.0

The rise of social media and the echo chambers created by computer algorithms are directly contributing to polarisation and divided societies, in which hard-line views are lauded and compromise is not considered. When confronted with opinions from an outside group, the proponent is labelled a ‘fascist’, ‘left-wing liberal elite’, or ‘woke-<<insert insult>>’. This division can even lead to violence, as seen recently in the US where insurrection was fuelled by social media. All countries may soon see similar shifts toward polarisation, as connectivity rises around the globe.

The issue of divided societies goes hand in hand with the spread of mis-/disinformation online. Misinformation is the unwitting spread of fake news, whereas disinformation is the deliberate spreading of fake news. Several forces, including nation states, have been accused of amplifying extreme voices to shift public opinion. While the deliberate spread of disinformation in this regard may be alarming, it is only a small element of the general shift toward division caused by the rise of social media. Curating or censoring information on social mediais one of the main solutions proffered by civil society commentators to fight mis-/disinformation. A similar suggestion is to train the population through schools in methods of questioning and detecting falsehoods. Consequently, we would weed out the lies and extreme opinions before they can sow the seeds of division. But, I believe, this isn’t going to work.

Indeed, the recent barring of Donald Trump from social media has led many to question whether private companies should have the right to police public platforms. Should US CEOs get to decide what’s in the public interest, not just at home in the US, but also abroad? Societies could end up pushing some views into the dark web, where we would have even less understanding of their reach and motivations. While these concerns are valid, I don’t consider that they get to the real problem –truth itself.

I believe we need to acknowledge as a species – yes, every human around the world – that there is no one truth or factual version of an event/phenomenon. Indeed, it is impossible to present any information without bias – the knowledge and experiences that make us who we are, also shape our interpretation of the world around us. This premise is not new; in fact, much social science research is based on this very premise – ontological relativism. As one definition states:

“The reasonable case for relativism would simply state that since we can only ever consider the existence of ‘the real’ through a specific discourse and that the way human beings have viewed reality has undergone significant changes, then we should not place too much faith in the currently fashionable forms of imagining reality. As Foucault argued, how can we have a history of truth if truth has its own history” (The SAGE Dictionary of Social Research Methods).

This is not to say that stock should be placed in every statement. For example, someone could say that the COVID vaccine will make you grow an extra leg. While I could never say that this is 100% false – because I could never know truth – I can be 99.99 recurring-percent sure that the statement is false. My job is to convince my counterpart of this belief. In order to do this, I must find a way to allay their fear, be it through reasoned or emotive argument. What I should never do, is dismiss the claim out of hand, or label the proponent with any kind of normative term, such as ‘crazy’. Most likely, their assertion is an expression born of legitimate concern for the welfare of themselves and others.

Thus, curating online content is an interesting suggestion, but inevitably a fruitless one. After all, who would do this curating? I don’t believe anyone could do it without bias. Even a computer algorithm would be biased by the ‘truthful’ information it was fed by its biased human programmers. We could teach it to emotionlessly determine fact from fiction, but the tools we would give it to do so would be determined by our own conception of what is and is not likely to be true.

To overcome division in our societies, then, we must first accept that everything in life is shaded in grey and everyone will have their own interpretation of events. For example, one could hold up the low death rate from COVID-19 in New Zealand as a shining example of how to deal with a pandemic. At first, the facts could present a solution as clear as day. But, then consider that, here in the UK, our close economic ties with neighbouring Europe and global connections mean that over 140M people enter the country each year. In New Zealand this figure is only 7M (3M returning homeand 4M tourists). The UK was clearly at greater risk. So, what was once clear as day, is now a little grey. So it is with every ‘fact’.

Once we accept that everything is a little grey, I believe we can move on to engage with our adversaries in a much more productive way, and we will be able to come together as never before, in open, tolerant discussion – no more shouting into the void. Conflict isn’t a bad thing. We just need to find ways to channel conflict into productive discussion and action.

The best way to do this is by trying to understand mis- and disinformation, its sources and mouthpieces: why are individuals and groups interested in spreading it in the first place and why are people interested in listening? Often, this will mean fathoming what fear or concern it speaks to, why that concern exists, and what can be done to alleviate it. All of this must be done without judgement of the individual. If we can do this, then division will become inclusion.

Faced with increasingly divided societies, it may seem easier now to pick a side and hunker down. But, I believe we must do the exact opposite. We must come out of our silos, our trenches, and our echo chambers. We must accept that the world of truth is a multitude of viewpoints, and each individual has the right to hold their own. It is upon youto convince themthat your view is better.