The ongoing Russian aggression in Ukraine has captured the world’s attention. Conversations focusing on the fragility of countries’ sovereignty and security are growing, especially among former soviet republics. Despite threats to sovereignty and security, Kazakhstan, the largest country in central Asia and a former member of the USSR, aspires to be a global superpower. However, the primary challenge to this aspiration lies in ‘promoting increased connectivity while maintaining a freedom of action’. The solution to this challenge may require using foreign aid as an instrument of foreign policy.

Thus, the primary aim of this blog is to describe and highlight pertinent issues for Kazakhstan’s foreign aid practices in the context of using foreign aid. The rationale behind such an endeavour is that KazAID (Kazakhstan’s foreign aid body) remains an under-researched area. KazAID’s establishment was driven by fulfilling Kazakhstan’s security needs and economic aspirations. While the role of foreign aid as a foreign policy instrument of the rich countries may be widely known, KazAID’s story shows that other developing nations could also challenge the existing western hegemony through strategic aid foreign practices.

Kazakhstan has been carefully trying to maintain relations with its largest trading partners - Russia, the United States and China. Kazakhstan believes that Eurasian connectivity could benefit its economic and security interests. Simultaneously, Kazakhstan maintains close ties with Russia and China. Earlier in 2022, when protests broke out against the Russian invasion of Ukraine, Kazakhstan sought assistance from Russia to quell the growing protests. These protests were guided by the fear that Kazakhstan, too, may be invaded by Russia. These fears are not misguided as being a member of Russia’s Eurasian Economic Union (EaEU) is getting increasingly costly for Kazakhstan. Critics suggest that while the EaEU mimics the EU’s institutional framework, in practice it is an agency for Russia’s geopolitical interests. Being a member of the EaEU constrains Kazakhstan’s sovereignty and weakens its economy and it may want to leave the EaEu, thus inviting Putin’s wrath. China, too, pursues economic interests in Kazakhstan as its largest trading partner and an emerging source of Foreign Direct Investment (FDI). Such close ties with China and Russia may invite sanctions from the West. Therefore, Kazakhstan maintains a multivectoral foreign policy and foreign aid is a crucial, yet overlooked, aspect Kazakhstan’s foreign policy.

From Aid Recipient to Aid Donor

Kazakhstan delivers foreign aid through its agency, KazAID. However, Kazakhstan used to be a prominent aid recipient rather than a donor. Previously, Kazakhstan received aid under the OECD’s Official Development Assistance (ODA) banner. Figure 1 captures the trends in aid receipt amongst the Central Asian countries to show that until 2007, Kazakhstan received aid in the same proportion as most countries in the region, but post 2007, the amount of aid received drastically decreased. Simultaneously, the demand for aid among other countries in the region (barring Turkmenistan) continued to increase. 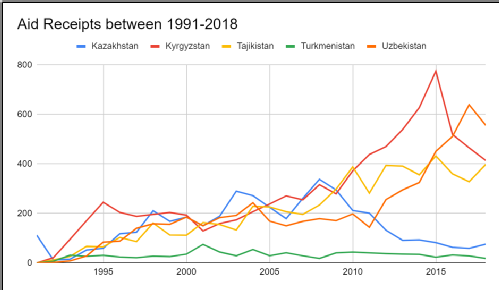 Some argue that this pivot may be due to the oil industry. In figure 1, the increasing trend (till 2007) occurred as Kazakhstan (and other Central Asian countries) needed assistance in transitioning to a market-based economy post their disintegration from the USSR. Simultaneously, due to its export policies for Uranium, wheat, and other natural resources, Kazakhstan experienced massive increases in its GDP.

In 1999, former President Nazarbayev had announced the intentions to reduce aid dependency. Following this decision, Kazakhstan took measured steps in reducing its loans and grants. Due to the increases in national income, the World Bank, in 2006, categorised Kazakhstan as an upper-middle-income country. Subsequently, in line with its foreign policy, Kazakhstan aspired to be included in the elite Organisation of Economic Cooperation and Development (OECD). Becoming a donor nation was critical in achieving this aspiration. In 2014, the government implemented the ODA Law which established the tasks, agendas, regulations and organisational matters for the same. This law served as the legal basis for establishing Kaz AID

KazAID was established through a presidential decree, under the Ministry of Foreign Affairs of Kazakhstan. It was founded with the aim of building regional cooperation, helping Kazakhstan integrate into regional systems, connecting Europe and Asia, and promoting peace and security in the region. Thus far, major chunks of its aid have been delivered to countries in the region, but KazAID intends to extend aid to Latin American and African countries, too.

With a unilateral aid of USD 2 million, Afghanistan has been KazAID’s largest aid recipient so far. KazAID also supplies aid to Tajikistan. Although Tajikistan didn’t list Kazakhstan as a ‘foreign donor’ in one of its reports, KazAID continued with its initiatives in the region to build ‘brotherly relations’. Such activities resulted in an invitation from the OECD for a conference in Paris in 2018. Subsequently, Kazakhstan’s international image improved considerably, even perhaps establishing Kazakhstan as a regional leader. However, countries in the region are still reluctant to accept this status.

Figure 2 shows the amount of developmental assistance provided as a share of Kazakhstan’s Gross National Income (GNI) to indicate that initially, the aid amounts increased exponentially and then stabilised as it received the OECD Paris Conference invite. This further alludes to Kazakhstan’s strategy of employing foreign aid to aid its own agendas. 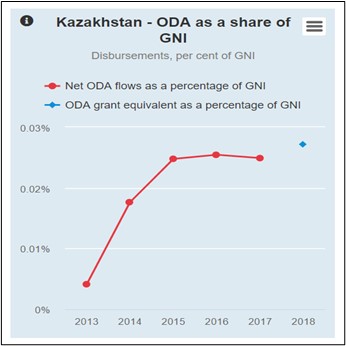 At a conference, the Kazakh Ministry of Foreign Affairs expressed that KazAID is an essential tool for the region’s long-term growth and development which would ensure peace and stability in the region. Indeed, this would directly benefit Kazakhstan’s own security and economic interests, which highlights the importance of foreign aid in Kazakhstan’s multivectoral foreign policy.

Situating KazAID in Kazakhstan’s Foreign Policy & Identity as a Donor

Given Kazakhstan’s proximity, history and economic ties with Russia, Kazakhstan could have invited sanctions from the United States or the NATO countries. However, to avoid this, Kazakhstan has employed its aid agency to partner with the US, the UN and other important nations/ organisations. Through KazAID initiatives and ODA policies, Kazakhstan’s donor identity was built which reaffirmed its authority in the region. But, in doing so, Kazakhstan has contrasted itself against other emerging donors.

Kazakhstan uses a ‘hybrid identity’ as a donor to combine aspects of being a traditional and an emerging donor. Historically, Kazakhstan has always maintained partnership, self-reliance and non-interference in other nations’ internal affairs. This is significantly different from the practices of traditional aid agencies, such as USAID. Yet, the motivations of establishing an aid agency and practices match that of the traditional aid agencies, contrasting it from other emerging donors.

For a landlocked and transcontinental country, like Kazakhstan, the development of foreign policy is crucial. However, to effectively employ the landlocked location, Kazakhstan must diversify its foreign policy approaches to develop its foreign aid practices. To this end, Kazakhstan strategically engages in foreign aid practices to cushion itself from hostile nations while ensuring a dominant role in the region. Thereby presenting itself as a viable ally to Russia rather than a threat, despite maintaining relations with the US.

Prachi Agarwal is an independent researcher and development sector professional, based out of India. Her academic interests include, among others, understanding foreign aid in relation to power and hegemony in a global setting.