Responding to a crisis in the face of a rigid Government: Oxfam India’s work in Bihar

Oxfam India’s work in Bihar, India in response to the Covid-19 pandemic 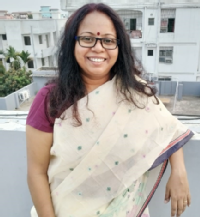 The Covid19 pandemic followed by an unprecedented lockdown in India called for an immediate humanitarian response. The double whammy which has thrown India’s poor into immediate food and essentials crisis calls for action where the government, civil society and non-government organizations must come together rising above their individual agenda and politics. The pandemic has particularly hit hard the east Indian state of Bihar.

Here I discuss a few emerging issues as a result of lockdown, Bihar government’s inadequate measures to address them, it’s indifference towards engaging with civil society and NGOs, and how an organization like Oxfam India could still respond to the crisis by adhering to a few important central government directives and appeals.

Bihar declared lockdown on March 22ndtwo days prior to the national lockdown declaration on March 24th. The major issues that have arisen can be classified into health, loss of livelihood and severe food crisis. Because of the lockdown announced by the Indian government there have been thousands of people pouring into Bihar from different parts of the country and moving to their home villages[1], many having walked for 100 plus miles. It took a few days for the Health Department to set up the necessary infrastructure at district hospitals and sub-district levels for initial screening, isolation and moving people to quarantine centers. At the time of writing this was happening mostly at district hospitals, schools and community centers. In this context contact tracing of the migrant work returnees became one of the most critical issues.

The second major issue due to lockdown is the loss of livelihood, especially for the poor daily wage workers who are engaged in the informal sector within the State (dihadi majdoor). A quick assessment done by a Patna[2]based organization Koshish Charitable Trust[3]across 18 slums, 13 municipal wards and 5 temporary locations in Patna shows that rag-pickers, daily laborers, working in nearby agriculture fields, construction workers, vegetable sellers, street vendors and domestic workers (who are mainly women) have no work because of the lockdown and hence no income which in turn has snowballed into a crisis of survival. They are forced to borrow money from local money-lenders at exorbitant rates of interest or from generous neighbors fin order to buy essentials. Many are reported to be going hungry or managing on just one meal a day. Many are migrants from other parts of the state and do not have ration cards to enable them to use the government provided Public Distribution System’s (PDS) food benefits.

The initial response of Bihar government was mainly to address the pandemic through the Health Department. One of the very first Health Department orders was to set up 10 isolation beds in each of the district hospitals of Bihar. Contact tracing, testing and treatment started gradually. On the relief front, there was a distribution of cooked food to homeless and destitute people for an initial few days with support from UNICEF. 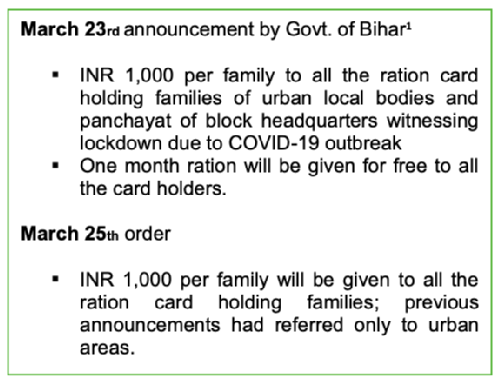 The government has also declared a PDS compensation for ration card holders. However, it excludes a large number of people who do not possess a ration card or any other documents like Below Poverty Line [BPL] cards to enable PDS access. A recent report by the economists Jean Drèze and Reetika Khera[5]states that over 100 million people in India and 18 million people in Bihar have been excluded from the PDS because an outdated 2011 census data is being used to calculate State-wide National Food Security Act (NFSA)[6]coverage which requires holding a ration card. Restricting the PDS coverage to ration card holders will mean excluding this 1.8 million in Bihar from the food security coverage during this hour of crisis.

To date the Government of Bihar is not allowing civil society groups/NGOs to distribute any relief materials including food. To confirm this a letter (dated April 1st2020) was issued by the District Collector of Darbhanga district. This letter stated that (1) the Chief Minister Office had announced that no NGO will be allowed to work on COVID19 relief (2) that all relief has to be channeled through the government and (3) that the permits issued to local NGOs for food distribution will be revoked.

Oxfam India is therefore working under severe constraints. Our first step under the lockdown situation has been to activate our local NGO partners at the community level. Since there has been a restriction issued from the State Government, we requested that our partners collaborate with the local District Health Department for mass awareness and the District Collector for relief distribution. Two of our partners in the districts of Madhubani and Kishangunje collaborated with the District Administration and Health Department to run an awareness campaign[7]across villages on COVID19 symptoms, using the Health Department issued IEC[8]materials, the importance of quarantine, social distancing and WASH[9]practices. They secured permission from the District Collectors to distribute dry rations and in both districts could reach out to 300 of the most vulnerable families including no-ration card holders, homeless and destitute. We have prioritized such families when distributing dry rations. These 300 families included 35 of those who were stranded in Madhubani station and could not move to their villages due to lockdown[10]. 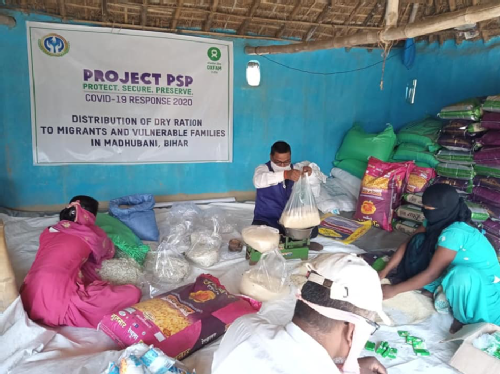 On March 30th, a letter[11]was issued by Amitabh Kant, CEO NITI Aayog,[12]appealing to civil society organizations in India to come forward to help with providing food (cooked and dry), essentials and WASH services to people in need. This allowed us to distribute dry rations to 1100 families between April 4thto April 8th.

Despite the letter by NITI Aayog, we are yet to receive any green signal from Bihar Government on engagement of civil society and NGOs despite several appeals. We continue our work on the basis of this and another recent letter[13]dated April 8thfrom NITI Aayog where they have asked to designate a Nodal Officer in each District level to coordinate with local NGOs. We are also working closely with the Inter Agency Group[14]drafting an appeal to Bihar government to formally engage with civil society for COVID19 response.

Bihar government’s silence is deafening every time a disaster has struck the state. From 2019 floods to this year’s COVID19 pandemic they remain indifferent with their inadequate measures and apathy towards engaging with civil society. The Bihar Government urgently needs an integrated way of working with all groups in order to reach the most vulnerable in these trying times. Civil society/NGOs (with their credibility, community network & outreach and volunteer base) can reach groups who remain overlooked and excluded by government policy and rules. A Government-NGO collaboration would be a most welcome move to fight COVID19.

[1]It is important to understand that Bihar is a state from where people migrate to various parts of the country in search of livelihood. Around 7.1 million people in Bihar (according to 2011 Census of India Migration Report) migrates to other states, out of which, a significant number migrate to the states of Jharkhand, West Bengal, Delhi, Uttar Pradesh, Maharastraand Kerala. Some of these states started closing their business units even before the national lockdown was declared and hence people lost their jobs (mostly those who are informally employed) and started going back to their home.

[2]Patna is the capital of Bihar

[4]India is a federal country and Health is a state subject.

[7]This is a van where we used maintained social distancing, provided community workers with gloves and masks and they only used microphones to spread messages without gathering people together in the same place

[12]The “think tank” of the current Union government.