The lead tokens of Roman Britain

Roman tokens found in Britain have previously received very little study. Discerning what form they take is key to understanding their purpose. To date the possibilities to be explored include a set of tokens bearing similarity to those from Rome, and leaden coin copies.

One form of token has been found primarily on the Thames foreshore by metal detectorists, as well as in East Anglia. They are not, however, particularly prevalent. In appearance they depict imagery similar to that found on coins. Deities feature heavily, while animals, busts and letters are also present. A variety of objects are also depicted, such as modii (a dry measure for products such as corn), palm fronds and boats. The imagery is, however, incredibly varied (plates of images from Rostovtzeff’s publication can be found here. It is evident that those found here in Britain have parallels elsewhere in the Roman Empire. For example, one token found on the Thames foreshore depicts a corn modius between two stars on one side (see above left) and a goddess on the other (probably Fides carrying a plate of fruits and corn ears, see above right). Parallels to this are housed in museums in France and Rome, as is the case with other tokens found in Britain. This therefore implies that these tokens are not native solely to Britain, and are more likely to have arrived here from elsewhere, or form a part of an object type recognised and used by Rome.

Another form the tokens may take is that of leaden coin copies (see below left). A few are recorded on the Portable Antiquities Scheme database, and it is possible that rather than trying to imitate coinage (lead after all is heavier than copper alloy and would have perhaps been obviously unauthentic when exchanging hands), they instead represent a token value. Some of the tokens on the PAS database are from Piercebridge (see below right), an assemblage which is believed to have had ritualistic significance due to its deposition over time in a river. This perhaps adds credence to the possibility that these copies had a function beyond merely being forgeries, especially as some have been folded or squeezed, thereby implying a votive significance. Tokens also form part of votive assemblages in Italy, for example in the river Garigliano. 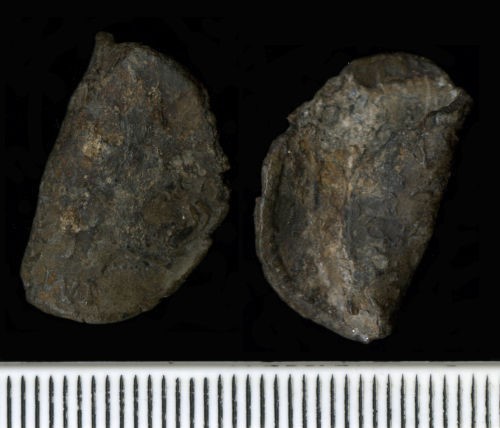 One reason for the paucity of tokens discovered in Britain could be that they are not recognised as such. When lead corrodes it often forms a protective and stable layer, but this obscures surface detail, thereby resulting in an undiagnostic lead disc. So far, the majority of the known tokens have been discovered by metal detectorists, rather than through excavation (the exception is a token found in the drains of the baths at Caerleon). If more tokens come to light perhaps their findspots and distribution will help to illuminate their purpose.

This month's blog was written by Denise Wilding, a PhD student on the EU-funded project Token Communities in the Ancient Mediterranean.

In 2012 this token was found in the Thames in London, resulting in numerous news articles about this 'brothel token'. The obverse carries the Roman numeral XIIII (14), while the reverse carries a sex scene. The couple are laying on a decorated bed or a couch, the woman laying on her front while a male straddles her.

This token is part of a broader series that carry a Roman numeral between 1 and 16 on one side, and various sex acts on the other. Another series carry Roman numerals on one side and portraits of Augustus, Tiberius or Livia on the other (see below). Buttrey analysed the dies of both series and concluded they were connected; he suggested that these objects date to the Julio-Claudian period and were perhaps gaming tokens, envisaging a possible scenario where one side played 'the imperial portraits' and the other 'the sex scenes', making the game a form of salacious gossip on the sex lives of the Roman emperors.

In reality, we know very little about these objects; their sexual scenery has created numerous forgeries, and very few archaeological contexts are known. They are often called spintriae, a label created in the modern era from a reading of Suetonius' Life of Tiberius. As part of the portrayal of Tiberius' activities on Capri, Suetonius records the presence of numerous female and male prostitutes, called spintrias (Suet. Tib. XLIII, see also Tacitus, Ann. VI.1; sphinthria or spintria referred to a male prostitute in Latin, from the Greek σφιγκτήρ, and connected to the Latin/modern word sphincter). It is this tale that inspired early collectors and scholars to label these objects spintriae, and when a hoard of tokens was found on Capri it cemented the name, though they were not called this in antiquity.

Indeed, the known find contexts of these objects suggest they had little to do with sex. Although hundreds of these specimens exist (precise numbers are difficult given the quantity of fakes in existence), only a handful of closed archaeological contexts are known. We cannot know whether the Thames example was lost in antiquity, or more recently. But one example was recently found in a tomb in Mutina; associated ceramics and other coins dates the tomb to AD 22-57, suggesting Buttrey's dating of the Julio-Claudian period is correct. Another was found during an archaeological campaign on the island of Majsan; this was pierced, suggesting it had been transformed into a piece of jewellery. Scattered other examples are reported to have been found in Caesarea Maritima, in the Garigliano in Italy, on Skegness beach (likely a modern loss) and in Germany (Stockstadt am Main, Saalburg, Nendorp-Wischenborg; these are sporadic finds). Although the information on the find places of these objects leaves much to be desired, none of these find spots are brothels, and in each example there is only one 'spintria' found. What their purpose was remains a mystery. Like many Roman tokens, much more study is required before we can fully understand these objects. This month's coin was chosen by Clare Rowan. Clare is a research fellow at Warwick, who has recently become interested in the role tokens had in Roman society.