Bronze token from the Julio-Claudian period. On one side two boys are shown seated facing each other, a tablet on their knees, playing a game. The boy on the right has a raised right hand. At the left is a cupboard or doorway (?); MORA above. On the other side is the legend AVG within a wreath. (From Inasta Auction 34, 24 April 2010, lot 381, Cohen VIII p. 266 no. 6, variant).

This token is part of a larger series of monetiform objects which are characterised by Latin numbers on the reverse. Some examples, like that shown here, have the legend AVG (referring to the emperor, Augustus) instead of a number. This same imagery, of two boys playing a game, is also found on a token with the number 6 (VI) on the other side; another example has the number 13 (XIII) on the reverse (Paris, Bibliothèque national no. 17088). This token series carry portraits of Julio-Claudian emperors or deities, or playful scenes, including imagery of different sexual positions (a sub category of tokens called ‘spintriae’ today).

We know this token is connected to the broader series from the Julio-Claudian period because of another specimen, now in the Ashmolean museum (Ashmolean Museum, Heberden Coin Room, photo no. 10544; shown left). This token carries the same design (AVG within a wreath) as the token above, and in fact the same die was used for both tokens (called a die link).

But what of the scene on the other side? Two men or youths sit opposite each other with a gaming board between them; the figure on the right raises his hand and there is a doorway behind the figure on the left. The word MORA sits above the scene: in Latin mora meant a pause or delay; it might also be used in a more imperative sense: wait! The word moraris is found on rectangular bone pieces whose function is also unknown but are thought to be gaming pieces (tesserae lusoriae). We thus have a scene of game play involving two individuals at a moment in time when one player is being asked to pause.

The scene is reminiscent of a painting from the bar of Salvius in Pompeii in which two men are depicted playing dice with their speech written above them - one declares 'I won' (exsi), while the other protests 'It's not three; it's two' (non tria duas est). Other paintings show the quarrel escalating, with the landlord eventually throwing the two individuals out of the bar.

The gaming scene on this token, as well as the numbers present on most of the tokens of this broader series, has led to the suggestion that these pieces functioned as gaming counters. However, unlike the bone gaming counters that carry numbers, these pieces have never been found together as a ‘set’, and don’t carry scratches that suggest they might have been used on a board (though this does not exclude their use in lotteries or similar). Instead it is possible that the scene was chosen because it communicates a feeling of fun. Lead tokens also carry numbers and similar scenes (including a scene of game play on a lead token said to be found in Ostia); these objects may have been used in festivals or other contexts associated with game play.

This blog entry was written by Clare Rowan as part of the Token Communities in the Ancient Mediterranean Project. It is based on a catalogue entry for a token that will feature in a forthcoming exhibition on ancient games and gaming in Lyon in June 2019, which is part of the Locus Ludi project.


MORA! A Roman token showing a game on Coins at Warwick">Tweet

Let's play with the portrait of Augustus! "Tesserae" and Roman Games

A variety of objects are given the Latin label “tesserae” by modern scholars: mosaic pieces, lead monetiform objects, spintriae, and small circular objects made out of bone or ivory, like the piece pictured above. On one side is a carved portrait of Augustus, while the other side gives his name in Greek (Σεβαστός) and the number one in both Latin and Greek numerals (I in Latin, A in Greek; the Greeks represented numerals through letters). Scholars originally thought that these bone objects, found all over the Roman world, served as tickets to the theatre, amphitheater or circus. But then this “tessera” and fourteen others were found in a child’s tomb in Kerch (Russia) in 1903, and our understanding of these objects changed completely.

Fifteen bone “tesserae” were found in the tomb placed in a wooden and bronze box, neatly stacked in twos. Each piece had an image engraved on one side and on the other a word accompanied by a number in both Latin and Greek. The numbers range from 1 to 15. The designs of the pieces are as follows, according to the publication of Rostovtzeff 1905 (the counters are now in the Hermitage):

Numerous other pieces similar to this have been found throughout the Roman world (e.g. Pompeii, Asia Minor, Athens, Syria, Crete, Vindonissa north of the Alps), but a complete set like this is rare, if not unique. Comparison with other pieces reveal that the numbers do not correlate with any particular image; so while Zeus is paired with number two here, on another set he may be number ten or fifteen, for example. Other pieces have the portraits and names of other emperors and empresses, though none later than Nero; some specimens represent Julius Caesar and one piece carries a portrait of a Ptolemy. This, in addition to the find spots (particularly in Pompeii, and in the abovementioned tomb) suggests a production date ranging from the second half of the first century BC to first century AD, although they may, of course, have been used later than this.

This complete set has led scholars to conclude that these are gaming pieces. Many of the surviving specimens carry Egyptian, or more specifically, Alexandrian designs. Our number four, for example, likely represents a sanctuary in Eleusis, which was a suburb in Alexandria. Other suburbs in the city, for example Nikopolis, are also shown and named. On the right is an image of one of these pieces: an obelisk stands next to an Egyptian-style building; the other side names Nikopolis and provides the Latin and Greek number four: IIII and Δ. Egyptian deities feature alongside the busts of gods, rulers and other well-known personalities (e.g. athletes, poets, philosophers, characters from comedies). The current theory, then, is that this was an Alexandrian game that then became popular across the Empire in the first century AD. We have no idea how the game was actually played, although it might have been a mixture of a local Egyptian game and the Greek game of petteia (πεττεία).

We might pause to think what it meant that one could play a game in Pompeii, for example, or in modern day Russia, that represented and played with the Alexandrian landscape, its suburbs, buildings and gods. Could the experience be similar to a modern monopoly board, where British streets and locations are experienced and named by people all over the world? I think we should also consider that people thus might also ‘play’ with the emperor’s portrait; how then did this affect people’s experience of the emperor and his family? But finally, since these bone and ivory objects are gaming counters, we should probably stop calling them “tesserae”!

This Coin of the Month entry was written by Clare Rowan as part of the Token Communities in the Ancient Mediterranean Project.

An Ancient Roman may not have been able to bring “Cards Against Humanity” to a pub game night, but they were able to bring spintriae. This particular sexy spintria was made famous when it was discovered in the Thames in 2012. There are several theories about the function of spintriae. People have suggested that they could be brothel tokens. Maybe the original owner of this token picked it up at the games? Or is it, as the title suggests, a game piece? One thing is for sure, the obverse is something that the user would remember and maybe even laugh at.

Two out of three theories are wrong. Suetonius wrote that Tiberius outlawed the use of coins stamped with the imperial image in bordellos (Clarke 1998: 244-245). This has led scholars to believe that these were brothel tokens. The idea that brothel customers would use these to pay for the services they wanted has been quickly dismissed (to see a more detailed discussion of this see Clare Rowan’s blog on this spintria).

This leads to the second theory. These tokens would be given to the public at public games. The idea this comes from a passage in Martial: “Now come sportive tokens (lasciva nomismata) in sudden showers.” (Martial Epigrams 8.78) These “sportive tokens” may be spintriae. That may seem like an odd token to give to spectators at public games celebrating things like military triumphs, but when considering the tensions in a society that placed importance on the lusts of men and the chastity of married women then maybe men receiving tokens to spend at a brothel might not be so bad (Knapp 2013: 236). However, this is not the case. The tokens would then be redeemed for gifts, but not at the local brothel. They could also provide a bit of a tough spot for an emperor who did not have the best press coverage. For example, viewers could be reminded of Tiberius’ sexual acts with boys on Capri (Suetonius Life of Tiberius 43-44). It is unlikely that an emperor, would want his people to snigger behind his back for what he got up to in his private life; thus, this theory seem implausible.

This leaves us with the third theory: these are game pieces. Although we don’t know what game these pieces were used with, we can be pretty sure that it was plenty of inspiration for the scenes of the game makers. There are other spintriae that have numbers going from I to XVI (1-16), but the sex scenes are different. This has led some scholars to believe that there is a correlation between the numbered spintriae and the illustrations of the sex manuals (Clarke 1998: 244, Clarke 2007: 194-5). This is also similar to the Pompeiian wall paintings found in the Suburban Baths. These are believed to have been numbered in a way similar to the lockers in the men’s changing room. As an added memory device, a taboo sex scene was placed above the number. The person using that space may not be able to remember his number, but they would probably be able to remember that funny dirty picture above it! (Savenga 2009).

This humour and function as a mnemonic device carried over to the game containing the spintriae. This spintria is tame compared to some of the other spintriae, so it was probably not one that was laughed too much. The steamy scene between this man and woman would have made the game memorable and may have reminded the player of what he had seen, read, heard, or even done. The fact that spintriae have been found in a widespread area, indicates that it Ancient Romans tended to have similar humour, played similar games, or that people loved this game so much that they brought it with them when travelling. Unfortunately, it may have been a male-only game. There were complaints [in Ancient Rome] that naughty pictures were corrupting respectable girls (Langlands 2006: 53). So, while the same sense of humour as a game of “Cards Against Humanity”, it might not have been a game to bring along to a game night with mixed company. However, it is not unreasonable to think that some clever minxes did manage to play “Coins Against Humanity”. 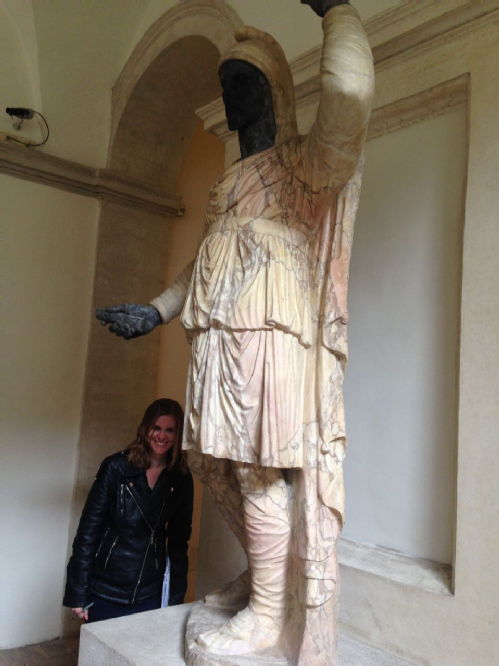 This month's blog was written by Katrina Anderson. Katrina is a Master’s student at Warwick University, who has recently become interested in the role of sex and gender in Ancient Roman art.