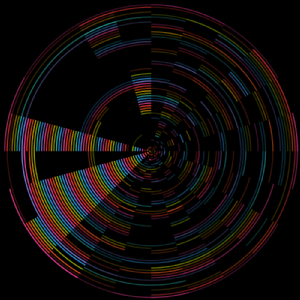 It's generated from Matlab license check outs for a single day. The image consists of 60 concentric circles split in to 24 segments. Each circle represents one minute, the innermost circle being 0 and the outermost 59 minutes past the hour. Each segment represents one hour. Midnight is where 12 would be on a clock face, noon is where 6 would be. A coloured segment indicates that a license was checked out during that hour. The distance from the centre represents the minutes past the hour when the license was checked out. Each segment is drawn with an opacity of 25%. The brighter the segment the more licenses checked out, though the brightness tops out at four licenses. (Finer graduations would mean that segments representing a single license would be really faint.) For example, the image below shows from inner to outer: 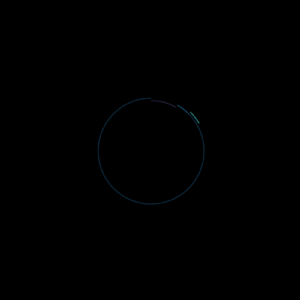 There is an element of doubt around tracking when a given license is checked in again. The Matlab license server log does not allocate any sort of identifier to a license check out so it's impossible to definitively identify when it was checked in again. I have taken the check in time to be the first time that a check in by the user@host combination occurs after they checked out a license. A user checking out multiple licenses from a single host could make that assumption incorrect.

The colours are the accent colours of the solarized palette http://ethanschoonover.com/solarized

Here's an image from the same data using colours used by Pirelli to denote the different compounds of their Formula 1 tyres. 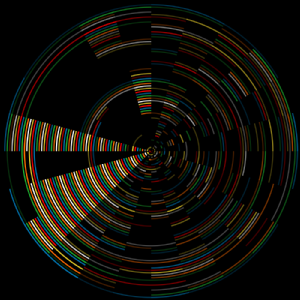 This is with the colours of the RAF roundel. (Things which are round…) 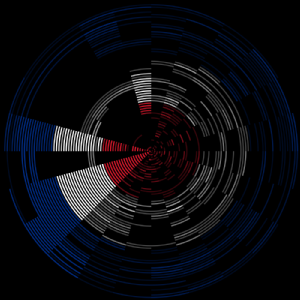 I was going to try doing one with University colours. Then I discovered the Corporate Identity part of the University website, which used to provide details of a colour palette for use in things University related, currently only provides details for a single shade of blue.

The images are generated using a bash script and ImageMagick. The script draws up to 5000 segments at a time. Initially it drew one at a time but it's a lot quicker drawing multiple segments at the same time. 5000 seemed like a nice number that didn't trip that error you get when bash command arguments are too long. It's nowhere near 5000 times quicker to draw segments 5000 at a time. This is due, to some degree I don't care enough to work out even roughly, to the temporary images being stored as mpc (http://www.imagemagick.org/Usage/files/#mpc) on tmpfs, thus minimising I/O overheard. (I (mis)use /dev/shm for this sort of thing since it's already there and usually has enough space.) Images are generated at 10000x10000 then shrunk. This is done to remove small unwanted artefacts which sometimes show up between adjacent segments in the same circle. Like this

Other examples which I find less aesthetically pleasing than the one linked here can be seen at http://blogs.warwick.ac.uk/mikewillis/gallery/matlab_log_file_art/