The Supernatural and Suffering in Research: Reflections on the conference

In this blog post Imogen and Francesca reflect on the conference, which was held online on Saturday 14th May.

After more than a year of planning, when the morning of Saturday 14th May rolled round, suffice to say we were eager and perhaps a little more than apprehensive for The Supernatural: Sites of Suffering in the Pre-Modern World to finally get under way. And then, before we knew it, it was 6:30pm and suddenly time to close the conference. To us, the day went very quickly but this is a testament, we think, to the quality of all the papers given and to stimulating rounds of discussion that followed. We are very grateful to our speakers, chairs and audience for their contributions to what we hope they will agree was a resounding success of a day. Having had some time to digest it all, below are some of our reflections on what came out of the conference. To refresh yourself on the breadth of papers, view the programme here. 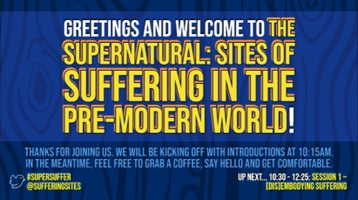 Overview of the day

Panel one, entitled [Dis]embodied Suffering, started off the day not only by probing the boundaries between the natural and the supernatural but also challenging the category of embodiment itself. The papers further explored wide themes such as pre-modern hamartiology and the transcendence, reformulation and repurposing of suffering across time, as well as the inherent volatility of trying to interpret seemingly-supernatural occurrences.

The papers of panel two, on Suffering Souls, tackled issues of gender, sexuality, and interpersonal relationships, including those that endure after death. What followed were fascinating conversations around agency and ‘responsibility’, as well as authorial (in)tensions and the use of fictional narratives in our work - especially with reference to how contemporary anxieties or concerns can, or ought to, be ‘read’ through their respective texts.

Panel three, themed around Suffering Spaces, negotiated the permeable boundaries and liminal spaces in which suffering can be located. We heard about real and imagined spaces, and real and imagined suffering, and as our own keynote speaker summed up in the discussion, ‘being scared’ and ‘scaring’. Human intimacy with these spaces was a central concern in all three papers, as was the ways in which the meanings these locations held could be altered or intensified by the operation of the supernatural within them.

The day finished with a keynote paper from Professor Diane Purkiss. Her talk discussed the distinct form of suffering that comes from ‘not being heard’, which for her talk was epitomised in the early modern Scottish witch trials. Insightful and poignant, her keynote spoke to our core motivation for holding the conference in the first place - our task as academics to relate, to exchange and champion the stories of people, of cultures and even in some cases, non-human beings, who have been misinterpreted, misrepresented or rendered invisible and inaudible by those who have come before us.

What was well established by the end of the day was that the meanings of supernatural suffering were multifaceted and yet indeed often defied meaning. As a result, the incessant duality of suffering’s purpose and nature was a common motif. Over the course of twelve papers, we heard about how suffering could be necessary/unnecessary, voluntary/involuntary, personal/collective, pleasurable/painful, fleeting/enduring, and foreseen/unforeseen. We heard how supernatural suffering might be understood variously as a judgement for sin, a warning to others, a test, or a means to achieve one’s desires. It may be imposed by others, or brought upon oneself, and it may also function as a means of creating a community of sufferers, and provide a bridge between cultures separated by time and space. In this way, suffering didn’t have to always be understood as a wholly negative experience.

Having a precedent for suffering was another common thread - whether appealing to mythological, biblical, historical or imagined pasts, recourse to paradigms of suffering were imperative in the construction and understanding of both suffering and the supernatural in one’s own time. Sites of Suffering was a conference focused on the pre-modern world but the adage that the past has power to shape the contemporary world was proven by several papers who demonstrated how the oddities of the past could be utilised, given new meaning and currency, or even weaponised by people today.

As discussion often circled back to the notion of sites and boundaries, gender subsequently became an additional overarching theme. We considered how norms of sexuality and gender determined our historical subjects’ ability to react to what befell them, how they were perceived as a result of stepping outside of these bounds, and how the supernatural served often either legitimise or discredit these courses of action.

Concerns around how we operate as scholars also became prominent. Several of our speakers noted the concerted efforts they had made to avoid anachronism, while other speakers’ methodological approaches sought to interrogate the process of ‘reading against the grain’, or ‘between the lines’ of texts in order to glean new meanings.

Thank you once again to our wonderful speakers and our keynote speaker Diane Purkiss. We are grateful to our chairs and everyone who attended. Last, but by no means least, we would like to thank the HRC, who supported us throughout the organisation of this conference and helped us to bring our idea to life.