A Conversation between the Conference Organisers

In this final blog post of the At Home in Empire: Colonial Experiences of Intimacy and Mobility conference series, Hannah and Liz reflect on their experience as conference organisers and the impact of the conference on their own PhD research. 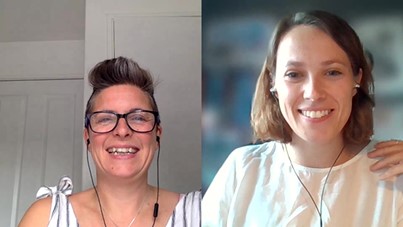 Liz: It’s been a few months now since the conference - how did you enjoy it?

Hannah: I really enjoyed it and was so happy with how everything went. It was great to have such a variety of papers addressing subjects spread across time and space, and I also liked how it brought together researchers from around the world. It was good to be exposed to topics I had not encountered before as well as more familiar themes, which I found refreshing.

Liz: Definitely! I felt that the panels spoke to each other beautifully and there were rich conversations taking place across the day because so many of our speakers really took the themes of the conference and ran with them. I was also really grateful so many people attended and participated from across the globe, staying up late or getting up early. It was a tiring day though - but I think I did expect to be more stressed on the day and it ended up going smoothly! I think if we did it again, we would possibly try and avoid the “Zoom fatigue” and maybe spread it across two afternoons and build in more time for discussion. We had so many great applications that we packed as many papers in as possible, to which there are pros and cons.

Hannah: I completely agree. I think that is one of things I have learnt, not just from our conference, but other online events I’ve attended over this period of lockdown. I can see the benefits of splitting what would traditionally be a day-long, face-to-face conference across a couple of days online because it was a long time to be sat, focusing on a screen. There were so many interesting questions and discussions which developed out of the panels that it would have been good to have had longer for discussion. But, it is a learning process and I think overall, the day worked well. How did the conference make you reflect on your own research?

Liz: When we were first developing the conference and building our proposal and CFP, one of the key themes for me was the emphasis on anxiety. I was approaching it from having freshly read Ranajit Guha’s article but also arguments from Kenneth Ramchand, drawing on Frantz Fanon, that white Caribbean writers displayed a sense of “terrified consciousness”. So the whole conference really helped me to think through some of these ideas further and interrogate that anxiety of dislocation or not quite belonging. However, I also took so much away from the panel on Spaces of Encounter. It’s so important for my own research on whiteness in Jamaica to decentre the white gaze and to understand how whiteness has been challenged and contested. This panel made me think about the relationships that occurred across domestic settings and how those could disrupt over-simplistic readings. Power dynamics were very much there, but there were also examples of intimacy, dependency, and vulnerability.

Hannah: For me, I was thinking about the first panel this morning! I will be doing an exhibition as part of my PhD and that panel reinforced to me the importance of considering how this research will be represented, communicated, and accessed within museum spaces. The papers highlighted the power of the curator in telling the historical narrative and the politics of how objects are displayed in both the home and museums. This is something I need to carefully consider in my own work. I was also interested in the examples of children and the disruption or absence of home in their colonial experiences, which was a thread running through many of the papers. The lives of foundlings I am researching reveal complex interactions with British colonialism and their absence of a home, other than an institutional setting, has started me thinking about how children function as historical actors and how they interpreted this idea of “home”. How did foundlings of colour think about home? How did they think about their own sense of belonging? Where and how did they forge their homes in eighteenth-century Britain?

Liz: What do you think has been the major takeaway for you?

Hannah: Food! The significance of food was evident in several of the papers, which was an interesting and unexpected ingredient (see what I did there!) of the day. Food could be a way to maintain a sense of home and belonging, to build and develop networks in new places, or even as a form of resistance as in the case of Warak Anab. More generally, I think the conference demonstrated the fundamental human need to create or recreate ‘home’, which spans time and space, and the significance of which has been brought into sharp focus during our own experiences of living through the pandemic. It was a surreal experience to be doing a conference about the home whilst sitting at home.

Liz: I think for me it was the parallels that came through from across different places and different times. There were so many commonalities alongside the specificity of different contexts and experiences. Kate Smith’s keynote was a powerful conclusion that brought together these different threads. Returning to the start of the day in a country house to moving across different spaces, different encounters, the power of the gaze, Kate’s paper brought together this emphasis on the importance of constantly having to negotiate and construct “home”. Looking across the different sources that people were working with, I was struck by the labour that went into making and remaking homes, whether that was in terms of cooking or keeping diaries, writing letters, drawing and painting; it was an ongoing process and never something to be taken for granted.

Hannah: So, finally would you do it all again?

Liz: Maybe - but not just yet! It’s been quite nice not to be worrying about the administrative side for a while, checking emails and trying to keep track of everything. But I did enjoy it and learned a lot from the experience.

Hannah: I agree, the administrative side was probably the most stressful part of the process as there was always the worry that we had forgotten to do something. However, it was great to have someone to share the journey with, and I think we worked well together which ultimately resulted in a really successful conference.

Thank you again to everyone who attended and participated in the conference, and particularly to the Warwick Humanities Research Centre for their support and generous funding.