In February 2015 the US Justice Department dropped an investigation into possible corruption at News Corp, after the UK phone-hacking and accusations that public officials had been paid for news stories. In May 2015 stories about alleged corruption in Nepal were the subject of a BBC documentary, in which it was suggested that money intended for relief efforts after the earthquake might be siphoned off. These two apparently unconnected stories are linked by an early nineteenth century scandal, involving News Corp’s boss Rupert Murdoch’s great great great grandfather, Robert Sherson, an East India Company official who was accused of embezzling money from a relief effort after a famine and then violent storms hit Madras in 1807. We have Sherson’s side of the story, since he had access to the press, and published several vindications of his conduct. 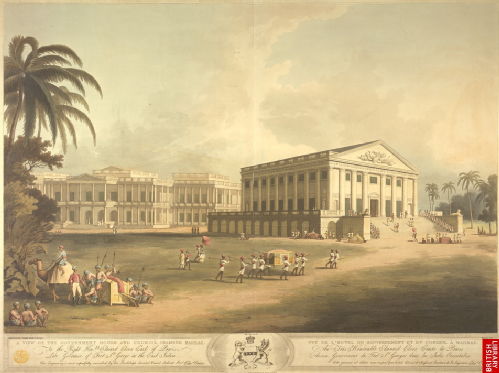 Robert Sherson had been appointed as Superior in the Grain Department, and supervised the food intended for the relief of 300,000 inhabitants affected by a famine. On 10 and 11 Dec. 1807 a violent storm tore the roof off the grain store, leaving it vulnerable to ‘the depradations of the starving multitude’. Sherson ordered a survey of what was left and ‘incautiously’ signed the estimate, ‘not suspecting public servants in whom he himself had been in the habit of confiding largely upwards of six years’. But the estimate was not believed by Sherson’s bitter enemy in Madras, Mungo Dick, with whom he had a long-standing dispute and, unluckily for Sherson, Dick had power over him as one of the members of the Committee overseeing his actions. Dick’s investigations concluded that the estimate of losses had been deliberately inflated and refused to accept that the mistake was an honest one. A Committee of Enquiry was set up by Governor Sir George Barlow, who, ‘the dupe of designing men’, appointed Dick as its chairman. The result was that on 10 Feb. 1808 Sherson was dismissed from his offices (he was deputy Customs Master, Assay Master, Director of the Government Bank, posts worth £4800 pa) under the charge of having fraudulently sold grain to the value of £12,000. Sherson was also accused of selling grain at higher prices than were authorised by the government and hence profiteering from the famine; and there were later accusations that he had attempted to bribe his assistant, a Mr Clarke.

Sherson’s defence was that he had done all he could to ensure an accurate estimate of the store had been made as quickly as possible after the story; and he refuted the charge of embezzlement, which rested on accounts drawn up by ‘the Mutsuddee or Hindoo Accountant’ who was Dick’s ‘creature’ and had allegedly doctored the accounts: ‘every one …knows the facility with which they may be mutilated. That nothing is more easy than by a dot or a scratch to add an hundred or a thousand even’ to the sums.’

When Sherson's case eventually came to court in 1814, the Supreme Court in Madras threw it out, arguing that frauds might have been perpetrated without his knowledge and that, in the opinion of the Lord chief Justice, ‘the whole amounted to nothing'. Another justice declared that if the matter had come before a British court Dick would have been jailed ‘as a perverter of justice’ and that he strongly suspected the accounts used against Sherson had been forged. Indeed, he thought it ‘astonishing, that [the Indian] Government could have listened to such a charge against a good and worthy servant, founded on infamy, fraud and conspiracy’. A third judge thought there was ‘not a scintilla of evidence beyond the opinion of Mr Cooke, founded on hearsay’. Sherson should leave court, he said, ‘freed from all suspicion of having failed in any manner whatever in his duty to his employers’. He was eventually reinstated and in 1815 the East India Company even voted him a present of 20,000 pagodas as recompense for his protracted suspension from office, and sent him back to India ‘with credit’.

The accusation against Sherson has all the hallmarks of a man with a personal grudge using a good opportunity to strike at a rival. The smear of corruption hung over him for a long time before being dispelled (and even after the judges’ ringing endorsement, suspicions about his earlier corrupt activity continued to circulate). On the other hand, Sherson had access to the press to clear his name and he also had powerful backers in the British Parliament. Seven years after he had been suspended, a Member of Parliament, Alexander Novell, waged a sustained campaign to have Sherson’s name cleared. The importance of access to politicians and the press may have been a lesson the family learnt well.