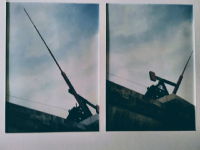 One of my favourite pieces of public art is the Metronome that stands over the Vlatva River in Prague. Created by the artist Vratislav Novak, the piece was installed in 1991, after the Velvet Revolution, on a plinth that used to hold a statue of Joseph Stalin. That statue, at 15m tall and weighing 17, 000 tonnes, was raised in 1955 but was destroyed (by high explosives – and with the strict enforcement of a no filming policy) in 1962 following Nikita Krushchev’s denunciation of the brutal excesses of his predecessor. Thus, Stalin went, in the accelerated history of the mid-20th century, from heroic father of the Soviet family of nations to shameful secret in 7 years.

Those regimes which imagine themselves to be in the vanguard of history and progress to a new kind of society always seem to have an eye on the significance of symbolism and are keen both to erect statues in celebration of themselves but also as in this case, or the cases of statues of the Buddha in Afghanistan or Cambodia, to use the destruction of statues as a means of erasing or re-starting history. It is perhaps this belief in the role of symbols in making the future and re-shaping the past that is a more meaningful link with the Victorians who put up the statue to slave-trading Edward Colston, over a hundred and fifty years after his death, than some that have been recently made.

In her book Memorial Mania, the scholar Erika Doss discusses the proliferation of statues and monuments raised in the mid-to-late nineteenth century USA as an expression of the anxieties of the period about rapid social changes and the quest for national unity in the light of them. As she describes it, these anxieties were met by attempts to re-make the urban landscape with an eye to negotiating between pressures for change and the existing order of things. We can perhaps see statues raised by the civic elites of the Imperial, Victorian UK as a similar attempt to narrate, to the newly enfranchised populations of its expanding cities, to whom it was they ought to be grateful. It is, of course, an on-going risk to state or civic authorities, of whatever time and place, that their citizens may re-interpret the symbols with which they live. That is what makes the ticking of the Metronome such an eloquent response to such statues and a reminder to the vanities of such leaders – made all the more poignant perhaps by its own current state of disrepair – that this too will pass.

I’ve been reminded of the Metronome by the welcome and timely light shed on the UK’s monuments by the Black Lives Matter movement, not just on Colston and equivalent slave traders, but also other figures whose views on race or other political sympathies are perhaps less widely known. The issues I’m concerned with – about how popular culture is memorialised – clearly lack the pain and political urgency of the current discussion but there are also some affinities. The first is the extent to which statues can become ‘invisible’ – they fall into the background and become part of the unremarked, taken for granted fabric of the city scape. It is valuable to look up and remind ourselves what they mean and who or what they celebrate. The ‘who’ is especially important because, as the philosopher Fred Evans has argued, the celebration of the lives of any individual in public art raises questions about two competing political values – the desire to celebrate diversity and the desire to appeal to a collective unity. Mediating between unity and diversity is an abiding problem for democracies but this is brought into sharp relief when one virtue obscures another, as it might do once the lives of commemorated individuals are subject to focussed attention (the recent unveiling of the statue to the first woman MP Nancy Astor, for example, was both a re-balancing of the well-established gender inequality of UK statuary and an occasion for her anti-semitism to be publicised). As Evans indicates, one response to this dilemma in contemporary monument making is to celebrate groups or archetypes (e.g. migrants or workers) in public art, rather than specific individuals.

This links to the second point about the difference between the statues of Victorian place-makers and those monuments put up today – when public art is again used to make city spaces liv-able, meaningful and, importantly to tourist economies, visit-able. While civic leaders of 19th century cities might have been able to raise statues without much in the way of broader scrutiny or critique, my impression of the statue projects that I’ve been looking at is that they emerge from years of committed and careful negotiation, between enthusiasts and campaigners, local planning authorities, chambers of commerce, communities and artists about who is to be commemorated, how they are to be depicted and where a statue can be put up. Any contemporary plan for a monument seems likely to be subject to sustained scrutiny – political and aesthetic- before it can be approved – and local councils and authorities are likely to be increasingly cautious about the kind of monument that can be raised. As, perhaps, they should be. Conversations about the kind of symbolic expressions of collective identity that have the ambition to reflect and be inclusive of a range of experiences are likely to be long and complicated. Statues from earlier periods have not always been subject to such scrutiny and it seems to me right that they are now being considered in this way. Bristol residents, includings its elected mayor, have long voiced their frustration at a lack of progress on even marginal changes to how this particular statue was sited.

The joyous scenes surrounding the toppling of the Edward Colston’s statue in Bristol – and the relative ease with which it was bounced down the street and tossed in the harbour - might remind us that, while a broadened, inclusive conversation about who should be commemorated makes it far harder to put statues up, it need not be difficult to take them down again.