Research (Driver et al., 1994) has found that children in different countries develop similar ideas about natural phenomena which differ from those held by the scientific community. One such idea is that electric current is consumed when it passes through a lamp. This is known as the ‘current consumed model’ (see figure 1). 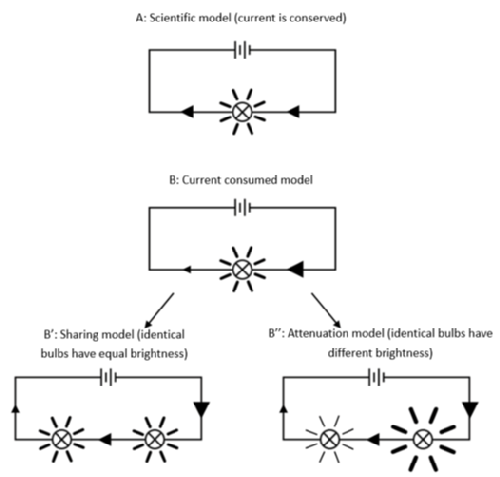 Figure 1: Popular models held by learners of physics, after Driver et al. (1994, pp.118-19) and Magnusson et al. (1997). The crossed circle indicates a lightbulb, where the ray lines have been added for an indication of relative brightness. The arrows indicate the electric current, where a smaller arrow indicates a smaller current. These models have been reported across different countries and ages of school students.

The current consumed model becomes more popular with student age. Of 46 sixth-form students, Shipstone (1984) found that about 40% held a current consumed model. Students have also been reported reverting to the current consumed model several months after adopting the scientific model. Joshua and Dupin (1987) reason that the model’s pervasiveness might be due to the common knowledge that batteries run out, and therefore it is counter intuitive that current should remain constant. The model may also arise because of the tendency to engage in sequential reasoning, whereby the current travels around the circuit and is subjected to a number of influences in turn (Shipstone, 1988).

Evidence points to this conception existing in modern classrooms. Students have demonstrated this conception in a relatively recent exam by an English exam board, which found that just over half of students conserved current (AQA, 2013a). The number of candidates entered into courses that took this exam was 214,091 (AQA, 2013b). Moreover, it can be argued that because this conception has been found across different countries and age groups (Driver et al., 1994), a certain level of universality can be assumed.

Chiu and Lin (2004) reported that students that held the current consumed model observed it in real life rather than reality. This is evidence that suggests that the current consumed model may warp the individual’s perception of reality. Therefore, the model may be of questionable use from a pedagogical perspective, and so one might argue that physics teachers should address it when teaching electricity.