10 seconds of PE to forget

This post is inspired by 10 seconds of a PE lesson which I will always remember, yet I pray that the student in question will be quick to forget. We will call the student Hannah. Hannah is in Year 7; she is enthusiastic and loves to try her hardest. Whilst she can hold her own in a game of netball, she is by no means athletic with a much higher BMI than her peers.

It was the start of the athletics season and I elected to deliver a sprinting lesson in the only way I knew how: sprinting technique and sprint-start coaching, all building up to the big 100m finale. The stage was set, the most eager students which had already competed were waiting at the finish line for the closing heat with Hannah apprehensively holding her best impression of a sprint-start position. The crowd eagerly cheered on as the other competitors competed for a near photo-finish, after which came 10 awkward seconds of depleted applause as Hannah made her way to the finish line, exhausted and humiliated. It is these 10 seconds which I have reflected upon the most in my PGCE year as they embody the degrading nature of performance-orientated PE.

Performance-orientated PE lessons are designed to measure attainment through comparative norm performance. Whilst this celebrates the ablest, there is a danger that such approaches embarrass, marginalise and disengage lower ability students. Achievement goal theory (Nichols, 1984) proposes that we are innately driven to either demonstrate competence or mask incompetence. As such, secondary PE is flooded with ‘Hannahs’ who have undergone negative performance-orientated experiences and now refuse to engage with athletics because their comparative norm incompetence has been exposed.

One answer to this issue is teaching through a mastery-orientated climate rather than performance. In a mastery climate, students achieve goals satisfaction through self-improvement, rather than winning. One framework for adapting lessons for mastery-orientation is Epstein’s (1989) TARGET Model. At the heart of the framework is the movement away from comparative norm performance toward self-referenced goals. Figure 1 illustrates Morgan and Kingston’s (2010) summary of how the model is applied to PE. 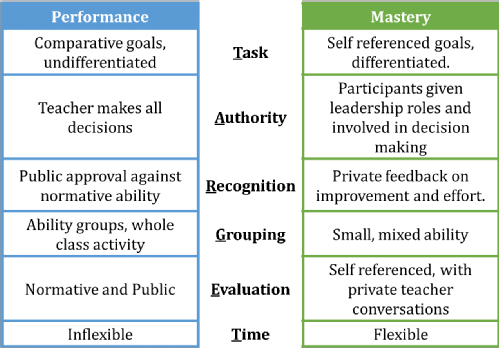 Upon reflection, using the TARGET framework, I adopted a mastery approach to my sprinting lessons with other classes. Students would work in small groups with the rotating roles of sprinter, timer and coach. They would time each other to sprint for 5 seconds and lay down a cone to mark their distance. The sole lesson objective was to beat your marker by applying the correct technique and I was amazed by the feedback I received.

The ablest students, accustomed to achieving satisfaction through performance goals, became frustrated at the lack of competition, yet they were engaged, nonetheless. One way I overcame this barrier was to offer an optional 100m sprint. But most importantly, lower ability students (Hannahs) which had not held back in stated their reservations towards athletics, actually thanked me for the lesson, because for the first time they were able to enjoy mastery-goal satisfaction in sprinting. My only regret is that it took Hannah’s 10 seconds of embarrassment for me to recognise the need to adapt my teaching climate to allow all students to succeed.