My Family and Other Primates, Kruger Park 2007 Part 6

Follow-up to My Family and Other Primates, Kruger Park 2007 Part 5 from Transversality - Robert O'Toole

Elephants, big and small. Some of quite vast proportions. Solitary males, and family groups with young. In the Kruger we found many of them. Some were happy and cooperated with the camera. Others were rather more grumpy, and gave us moments of excitement. 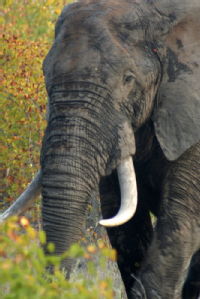 Elephants are big and grumpy, but fun to watch

Mafunyane, Shawu, Kambaku, Ndlulamithi, Dzombo, Shingwedzi, Joao, Mandleve, Nhlangulene, Phelwana. We entered the great Elephant Hall in darkness. As I held the door open, Lawrence at my feet and eager to enter, bright sunlight projected shadows of the beasts onto the whitewashed walls within. Ordinarily they were simply massive. Now they had become utterly monstrous. I know the true life horror stories well, they make good tales to tell on long dark nights in the bush. Another of Kruger’s camps has a photo gallery to prove that they are not mere urban myths: cars crushed flat by 7000 kilos of angry Loxodonta Africana; surely no one escaped alive? Sometimes it happens, and no one blames the elephant: the tourist just can’t get the right angle for his camera, so he opens the door and steps out. But that gesture is, to an elephant bull in musth, an irresistable challenge. Hardly a fair contest. At Delta Camp in the Okavango we once felt happy to have been given a freshly constructed reed hut to sleep in. On the first night an elephant brushed past. In the morning they showed us photos of the previous construction, flattened by a tusker in search of fresh water.

When an elephant means business, it nearly always comes immediately and without warning except for a momentary rocking motion of its body; sometimes it comes without a sound. The tail stiffens, the tusks are held high and the trunk is drawn in against the chest. The ears are usually, but not always, spread out to their full extent giving the head a most awesome frontage of 12 feet or more. Bere, R. 1966, Wild Animals in an African National Park

Mafunyane, Shawu, Kambaku, Ndlulamithi, Dzombo, Shingwedzi, Joao, Mandleve, Nhlangulene, Phelwana. Tusks held high against dark shapes like vast threatening ears. In the darkness each of these great tuskers stood threateningly above us, as if still alive and gathered together for a conference of elephant bull ferocity. Ghosts of Kruger’s greatest, a power-cut having summoned them back from the dead. The receptionist in the Letaba Elephant Hall seemed entirely unconcerned. The lights would be back soon, she optimistically claimed. Lawrence does not yet like the dark, so we retreated, returning later to see the awesome collection of elephants, some of the biggest ever recorded. The museum made a lasting impression on Lawrence, we visited five times. He was particularly keen on a jar containing a pickled snake – very much like the Museum of Natural History in Oxford that he loves so much.

Giant elephants are, in the Kruger, not simply a matter of history. We have seen many, and have sat safely watching them for hours. The Kruger is one of the best places to see them. In northern Botswana, along the Chobe river front, it’s not unusual to find several hundred elephants together. From a boat that is spectacular, but when we got trapped amongst them in a bakkie, a rather more tense situation emerged. Add to that the overzealous safari operators, with Landrovers full of $1000 a night guests, then trouble is inevitable. In the Kruger the small family herds seem more relaxed, less harrassed. Whereas the Chobe/Linyanti/Zambezi area has around 100,000 elephants, the Kruger Park has 13,000. And so we can get close and intimate with elephants acting naturally…

Here are some photos of a small family herd. They ran fast across the road behind us as we were heading towards Olifants Camp, having climbed up a steep incline from a river bed. A vehicle in their pathway was shooed away like a fly. They then settled into play and grazing, allowing us to get some nice photos. 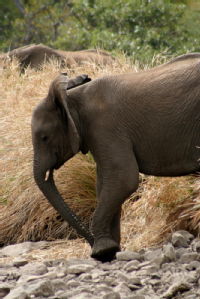 Does her bum look big in that?

Occasionally elephants are unpredictable. We had been trumpeted on a couple of occasions. Emma claims that I always get too close to the elephants. Lawrence learnt from her to say:

Daddy got too close to the elephant.

But in this case, it was Emma at the wheel of the car, although she could not have predicted that a male in musth would be following the small family herd that had just crossed the road. The big male gave us a trumpet, a bit of ear flapping, and a small mock charge.

Emma’s obvious alarm was actually caused by her inability to get the car into reverse. She had never put an automatic gearbox into reverse before. Not a good time to learn.

We also had a rare opportunity to see a herd of elephants in the rain, making for a very different photograph…