My Family and Other Primates, Kruger Park 2007 Part 5

Follow-up to My Family and Other Primates, Kruger Park 2007 part 4 from Transversality - Robert O'Toole

On a rocky ridge, high above the Olifants River, we stayed in the luxurious Lebombo Guest House. With noisy hippos in the river gorges below, eagles and vultures drifting past our patio, and a familiar family of hyenas by the road.

Drifting on the thermals, from Shingwedzi to Olifants

From Shingwedzi in the centre of the park a long hot strip of grey tar runs southwards. It was our route for over an hour, passing through varying degrees of mopane dominated landscapes, interrupted by the occasional dry river bed and cluster of larger riverine canopy.

Mopane gives the north of the park an unfair reputation. In places, that grow-anywhere arid-zone tree is tall and dense, standing as thick mopane woodland on each side of the road. When the poor soils are even thinner and sandier, on the sandveld, mopane is a mere shrub, still densely arranged but short enough for an antelope’s head to protrude through the canopy. Flying across the Kalahari, one sees this landscape in famously endless iteration. The northern Kruger is the southernmost extent of that harsh world. However sometimes, if the conditions are suitable, grassland is interspersed with mopane and other trees, forming a sparse density of vegetation. Such terrain, known as parkland, is more suited to cheetah visioned and lion obsessed tourists. And that is a problem for the Kruger Park Management, who would very much like to attract people away from their over concentration in the big southern camps (Satara, Skukuza etc).

As my pervious journal entries demonstrate, the park to the north is a wonderland rich in a diversity of birds, animals, trees and flowers. There was for us no end to this on our journey south. The trick is to zoom in and around the scenery. Become panoramic, and mopane is breathtaking – a near permanent display of autumn golds and reds. Then zoom back in to find birds and animals scattered around its vastness. At one water hole, near to the Mopane Camp, there is almost always a fascinating crowd gathered: various species of vulture.

We broke the journey at Letaba, the temperature had climbed to 36 celsius. And then onwards. More mopane. On such long hot days, Olifants Camp is a relief – rising up into the cool breezes that circulate along the high rocky ridge upon which it is placed.

The Olifants River viewed from our patio.

The vast Lebombo Guest House was our eyrie (£125 a night, sleeps 8). From here we could watch eagles, vultures and storks drifting past as they caught the early morning thermals.

A saddlebilled stork passes by.

While Emma sits and reads.

The Lebombo Guest House is in fact a sprawling complex of three buildings, one of which houses two bedrooms, a kitchen and large lounge, with the other two hosting two further bedrooms each.

The two large patio areas include a braii, upon which I cooked nyala steaks.

The comic rumbling of hippos sounded from far down the mountain side. 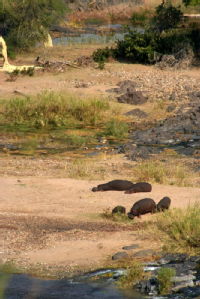 Along with water falls as the river cut through the varying strata of rock.

And went for an elephant ride… 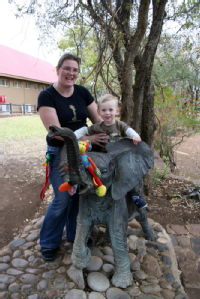 On a morning game drive, Emma photographed a family of hyenas lying next to the road near their culvert den, in exactly the same position that they had been in last time we came to Olifants ten years ago. They do not look like they have moved, or have any intention to do so. 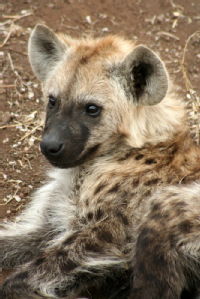 On our second evening, Emma and I had dinner in the restaurant: a superb buffet, with a great game stew not to be missed.