My Family and Other Primates, Kruger Park 2007 part 4

Follow-up to My Family and Other Primates, Kruger Park 2007 part 3 from Transversality - Robert O'Toole

Part four, and we are on a game drive out of Oliphants Camp in the Kruger Park. Impalas, the most perfect of antelopes, versus the power and supreme violence of lions.

While staring at an unusual object it cannot identify, an impala will move its head up and down and sideways, apparently to see it more “in the round”. Estes, The Behaviour Guide to African Mammals, 1991, p.166

Estes provided, as ever, a reliable description of the African tableau before our eyes. For some time, animals moved backwards and forwards along an area of open space above a small vlei, half an hour’s drive to the north of Oliphants Camp in the Kruger National Park. A string of zebras, wandered through small groupings of impalas, an animal accurately described by Estes as “the perfect antelope”. An occasional wildebeest mingled and munched upon the sparse but adequate vegetation. Nothing unusual. Just another day on the way to the waterhole.

Observing closely the black scent glands on the hind legs of a large buck impala, I was reminded of a closer encounter from a few years earlier. It was then, on the day of our wedding in Hwange National Park, that we had an opportunity to observe this typical mopane-veld resident at very close range indeed. The hosts at the venue for the happy day, Jijima Camp, had “adopted” an impala – or perhaps more accurately, had been adopted by one. The animal slept next to our tent, as it would every night, ruminating in relative safety. Although leopards and lions are occasional visitors to such un-fenced camps, the impala was probably correct in assuming that close association with humans would offer a greater degree of security from survival of the fittest. And this then is how my copy of Estes obtained its unusual signature. Buck, as the impala was known, stood just a couple of metres from the front of our tent. A male impala, complete with horns, is at close range quite an impressive sight. However, all of its dignity is immediately lost when it starts to bob and weave its head in the quizical manner described above. Buck was obviously confused by some aspect of the scene that I presented. My inevitable laughter only made him more agitated. In an effort to diffuse the situation, I sought to restore the natural order by reading aloud to him the prescription of ideal impala behaviour given by Estes in the very book that I was at that point casually flicking through. I then gave Buck the opportunity to confirm or deny the stereotype of his kind presented by the finest of zoological minds. And what was Buck’s response? In a flash he lept forwards, and with his powerful jaws ripped the book out of my hands, tossing it high into the air. I dived out of the way to avoid being impaled by his horns. And so pages 137 to 156 of my copy of the Behaviour Guide to African Mammals are now indelibly imprinted with the teeth marks of an impala, that most perfect of antelopes.

The memory of Buck amused me for long enough to be surprised upon the return of my attention to the current scene. Some unidentifiable tension had stirred during my reverie. The behaviour was again that of a quizzical impala buck: upright stance, twitching ears and tail, moments of concentration interspersed with that comical bobbing and weaving. He was, as Estes says, trying to see something more “in the round”. And we knew exactly the cause of this sudden alertness. Just after setting off from Oliphants, the driver of the early morning game drive had tipped us off. Lions had been spotted, he said, giving a quick and simple description of their location. We thought that Lawrence might like to see them, not having done so before. Otherwise, we may not have bothered. And here they were, as described, two females lying beneath a small tree. For some time potential prey had passed by seemingly unaware of the deadly duo within easy ambush range. Until finally contact was made between killer lion and lion food. 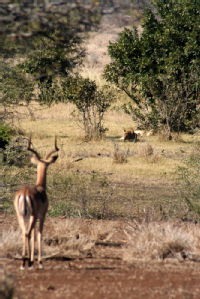 How terribly dramatic. Imagine the Jonathan Scott commentary, suggestively hushed. Imagine the camera crew poised to get the kill in the can. Imagine the millions of viewers earnestly believing that this is real Africa.

Oh dear, and now I have to spoil the illusion. For reality is rarely like the movies, especially when a lion is in a leading role. To continue the Hollywood analogy, the truth is that they are more like Brando than Brosnan. Big fat and lazy. With huge potential and a very occasional blockbuster, but more suited to lying flat out next to the pool for days on end sipping Martinis. This impala knew the score, and was entirely unworried. Even his brief expression of interest waned quickly. Hundreds of other prey animals in the area didn’t even bother to look, although they must have known that the lions were there. Lawrence agreed. The lions were of no interest. “Where’s the monkeys?”. After the event, we have to remind him that he has seen lions, because the reality is nothing in comparison with the Lion King.

Unimpressive lions – click to enlarge, if you really want to

While ambling slowly back to the camp, Emma and I recalled our many encounters with lions, from our many many safaris. We both sense that we have seen many lions, although the sightings tend to blur into one vague impression. Sightings of cheetah, leopard and even wild cat always stand out, partly due to their rarity, but more as a result of the stunning presence of those lesser cats. There was a particularly notable male lion that I tracked along a road in the Kalahari Gemsbok Park. He had a black mane, and seemed massive, with the top of his head reaching above the window of our Hilux (a really tall 4×4). Emma wound her window up with unnecessary haiste. And then there were the lions that visited our lonely camp at Nqwethla, deep inside Hwange. We had already been driven out of our tent by an elephant. I had spent part of the night pouring parafin onto an open fire so as to scare the pachyderms off with a fireworks show. The flames seemed to at least distract the elephant from the task of trashing our camp. But they had no effect upon the noisy family of lions that walked by as we hid.

So you want to go to Africa? You deperately want to see lions? Our long standing family joke is this: one year in Hwange, a party of very annoying Americans spent their time racing around the bush, repeating the same question with urgency – “have you seen any cats?” (said with annoying American accent). Of course they missed the wild dogs, bee-eaters, and troop of banded mongeese.

Do you still want to see lions being interesting, just like on the TV? There is one last possibility. We tried it a few years ago. It works like this: Go out walking with a really good game ranger. We were lucky to walk with the legendary Frank Watts at Shimuwini Camp in the Kruger. When you spot many lion tracks, just believe him when he says that it’s perfectly safe (assume that he means that they are long gone). Then follow him up a hill, heading towards the most foul smell of death imaginable. At the top of the hill, examine closely the big runny black slick of lion crap. Proceed further, nominating a charmingly innocent member of the party to take the lead. Emma was rather surprised when a big lioness ran across her path. As we approached the half eaten carcass of a buffalo, we could hear the rest of the pride running in all directions. Yes, we had driven a pride of lions of its kill. Cowards. Frank examined the carcass for signs of bovine TB, a serious issue in the Kruger. It looked healthy. With the light fading, we slowly wandered back to the Landcruiser. Being at the back of the line, I was last to get into the safety of the vehicle. While waiting for my turn, I sensed movement behind me. I turned as I climbed into the open back of the vehicle. A fully grown male lion, complete with impressive mane, stood staring assertively at us. I could read his mind: “don’t mess with my dinner – or next time you’re dessert.”

Recently, Frank hit the headlines as the safari guide in the world famous “battle of the kruger” incident, the video of which is on YouTube. Amazingly, a herd of buffaloes fought back against a pride of lions that had taken one of their young. The buffalo survived. The lions almost didn’t. It may even be the case that this is the same cowardly pride that we encountered several years earlier.

Importantly though, I must say that the best drive that we’ve been on with Frank typified the ideal game drive. On a sunset trip there were no lions, but rather a sequence of fascinating insects and birds, including a nightjar and a sun spider.

You can find out more about Frank’s work on the Thompsons Indaba Safari Company web site.

Wildebeest, king of grunge, as played by Johnny Depp 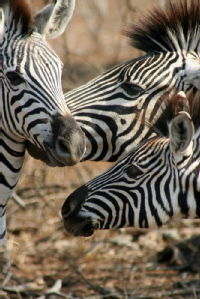 Great photo of zebras by Emma