Lost in La Mancha (or somewhere in Spain) 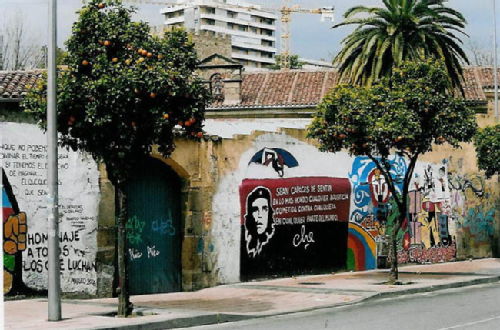 It had been a difficult day. But at least el Che, fellow motorcycle traveller, was there to meet us in the small Extremadura town of Plasencia. Our escape from León, haunted by the previous evening's experience, had been of the worst genre of nightmare: trapped in an infinite loop. We now knew what the mass processionists had really been up to as they marched around the town: they had hidden all of the signposts in order to punish the two heathen BMW riders. Within the centre of the city, not a single sign remained to indicate the correct direction out towards Extremadura. After several futile loops, we just got onto whichever main road seemed to head in appoximately the right direction. It was off course the wrong direction. And so we were magnetically drawn to Valladolid, to the East. Even a last minute attempt to find a cross country route was foiled by the European Union road building programme. A new road, not marked on my 2007 Michelin maps, led to confusion and eventually surrender.

Having passed through Valladolid with relatively little pain, we finally turned South to Salamanca. At the entrance to the city of Salamanca, our saviour arrived (praise the lord), aboard a 250cc Yamaha trail bike, revving competitively at the lights. Somehow I managed to mime our key message: please show us how to find the road to Bejar. He seemed to understand. Even more impressive, he led us patiently through the heavy traffic, realising that fat BMWs cannot squeeze through the same gaps as his traillee. We found the road out. He waived us on. We escaped, impressed with the generosity of the Spanish.

South from Salamanca, geographical interest returned. With mountains to each side of the road, and views across yet more reservoirs and up to snow covered peaks, our pace slowed. Having suffered, we agreed to look for somewhere to stop. Extramadura, our target, was still too far off. And therefore we paused for the night at a far-too-expensive hotel in the almost non-descript town of Bejar. The road in offered the most amazing sight: a mountainous rubbish dump colonised by a big flock of white storks (large birds). In fact the hotel was excellent, and cheap for one of its standard (about £40 for each of the two double rooms). With our bikes parked in an underground lair, we looked for food. Again the only option was pizza!  Three days in Spain and little sign of classic Spanish food. 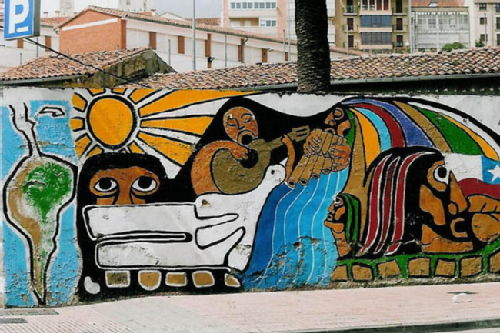 A short ride the following day led us into Extramadura and welcome changes. Is it possible to mark the transition from Northern Europe to the South? Perhaps the mural on this wall marks the spot?  Or perhaps our first sighting of oranges growing in the streets. 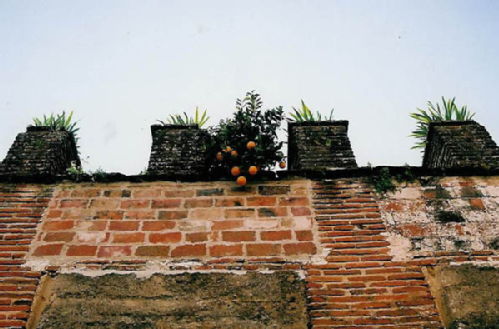 Plasencia was, immediately, a hit. It has a different spirit. There is tradition, but also youthfulness, and some pleasing irreverance. The graffiti is as good as that of Barcelona. 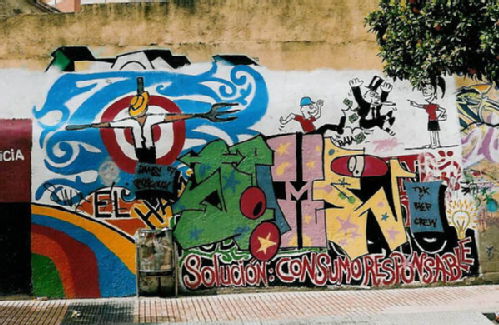 Mr Capitalist gets his ass kicked

We stayed for a day and a half, with much of that time spent sipping strong coffee at the oddly named Cafe Parking (it is near to a well hidden car park, but the name does it injustice). From there we could see storks nesting, as they do all over town, as well as peregrines and kites high above. 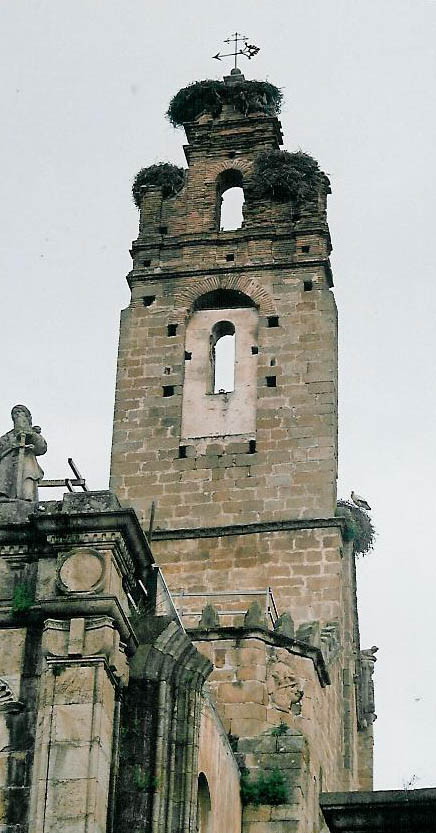 Storks nesting in the cathedral

Short rambles were taken through the town centre, with tradition and the new both nearby. 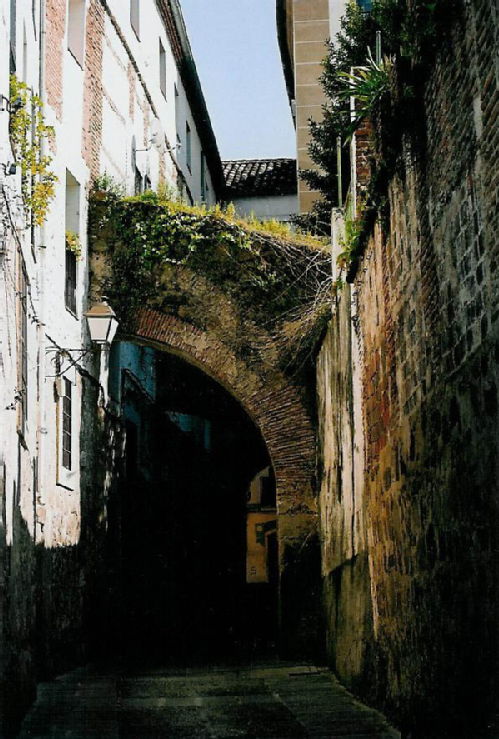 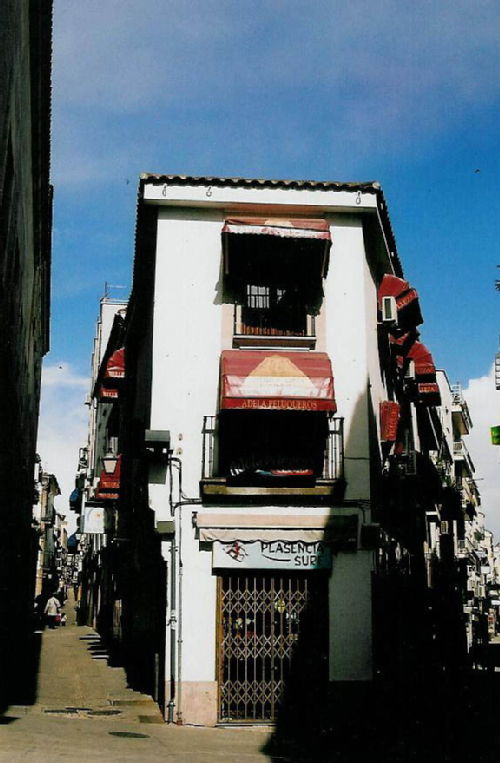 Yes, that really is a surf shop in the middle of Spain

The camp site at Plasencia, a short ride outside of town, provided a popular base. But even there we found ourselves in a dramatically different culture, that of macho Spanish hunting and the matador. The number of stuffed animal heads pinned to the walls of bar was to both of us quite shocking. In Africa it's usual to see the odd impala head or zebra skin. But this was simply the result of a massacre - a global massacre. Animals from every conintent were present, crammed onto the walls, tongues hanging out as if strangulated. But of course they had a very different kind of death, as the TV show constantly playing on the big screen demonstrated. In a series of locations, swarms of heavily armed Spanish men leapt from 4x4s, released packs of salivating dogs, and blasted the wildlife to bits. In Britain hunting is rare, and usually undertaken for good reasons by highly skilled experts. In Spain, it seems, any one is welcome to blast off hundreds of rounds randomly. The TV show even included trophy hunters killing roan antelope in Africa. Roan! Beautiful endangered roan!

Bloodshed in the bar was followed by yet another unsatisfying plate of badly cooked meat and chips in the restraunt. This time we were surrounded by the heads of bulls, ritually slaughtered in the ring. And how odd, in the middle of the big collection of bullfighting memorabilia, a cabinet displaying a collection of military medals from around the world: a Purple Heart, the Order of Lenin, an Iron Cross, and the Victoria Cross. Death and glory!

Light relief was supplied by a visit to the local supermarket, a branch of Carrefour bigger than any shop that i've ever seen, and perhaps bigger than any building that I have ever been in. So vast is its floor space, that it is patrolled by a team of shop assistants on roller skates. Having failed to understand local shopping customs, one such girl snatched up my small bag of apples and piroueted off to the counter to have them weighed. Meanwhile the lovely checkout girl practised her quite good english. I like Plasencia.