Balancing a Bing and other esoteric BMW motorcycle restoration rituals

The short-term refurbishment of my R100GS Paris Dakar is almost complete. It has been a slow process, but the worst of the external problems have now had at least a temporary treatment. 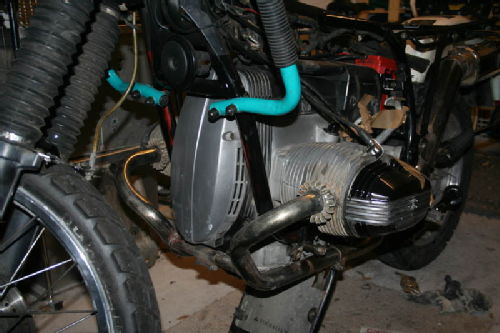 The most important task was to clean up the engine casings. I’m not trying to create a show bike. Rather, I needed to get rid of the thick layer of road grime and old oil, so that I will be able to spot fresh oil leaks more easily. Whilst doing this, I gave some of the surfaces a polish with Autosol and wire wool – yes wire wool – the old airhead GS engine is almost bare alluminium, so can be treated a little more roughly than a modern bike. The cylinder cover fins were scrubbed even more aggresively, using a long bristled steel brush. A build up of grime in the fins may actually lead to overheating – the engine is air-cooled, so needs to transfer heat outwards as efficiently as possible.

With all of the crash bars and bash plates off, I could also clean the frame, remove a substantial amount of rust, and repaint. I did an acceptable job of saving the metal from further damage in the short term, but it looks as if it will need a professional treatment soon. Powder coating will be worth it. The lower fork bridge and the battery cage also scrubbed up well, and now sport a shiny black coat of Hammerite. Less sucessful was my attempt at repainting the valve covers with high-temperature paint. I think i’ll just strip them back to the silver alluminium, and maybe even replace the left hand cover with a Touratech cover (with built in oil filler). As for the severely battered right hand engine bar, having taken the brunt of most of my off road falls, I can’t save it but haven’t yet sourced a replacement.

As can be seen from the photo, the downpipes were replaced with ones bought for a bargain £40 from Motorworks . Part of the old pipes seized solidly into the y-piece, necessitating its replacement with a new Keihan pipe from Motobins – £130 – rather expensive, but it is nice and shiny. The silencer still seems fine. I can’t find a replacement for the excellent Laser Produro, so will keep it on for as long as possible.

Replacing the heavily corroded left hand spark lead has been just the first step in sorting my engine problems. The bike started up first time, ran well for a while, but then started running roughly. Prodding the carb mechanisms revealed that they were sticking badly: perhaps the most common cause of engine problems in the airhead beemers. The big Bing carbs are completely exposed to the elements, sitting just behind the flat twin boxer cylinders as they stick out the sides of the bike. The external throttle and choke mechanisms, if run in the British winter, soon fill up with black gritty road grime. Rough running, over fast idling, and even serious engine damage (like the burnt out valve that I once suffered) may result.

To solve the problem I removed each carb from between the engine and the airbox, turned it around so that I could access the dark side of the carb, and scrubbed it well. This photo illustrates a clean unit: 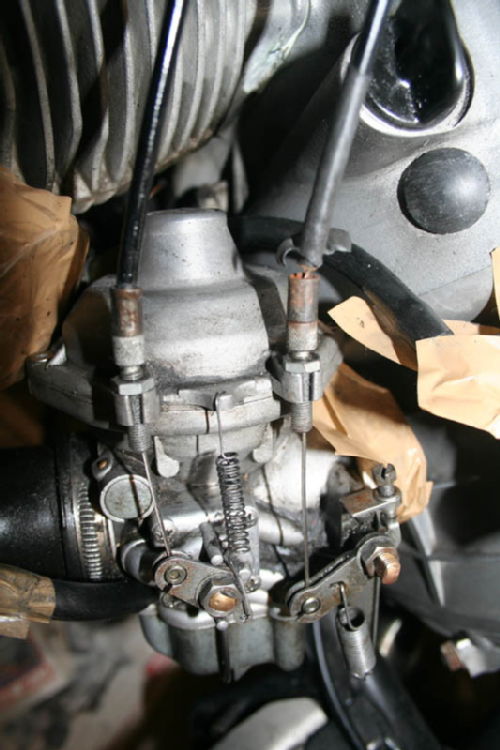 Notice the damaged throttle cable. I replaced it with a new OEM BMW cable. Once reassembled, the throttle and choke action was much improved. I had expected that when starting the engine the carbs would be well out of sync and the idling speed set incorrectly. Amazingly I had guessed almost the correct settings, so have not yet seen the need to use my vacuum guages and the ancient Bing balancing ritual. My plan is to get the bike to an airhead boxer specialist next Saturday (Euroclassics of Northampton) and get the carb settings checked, as well as some good advice on what else needs to be done. This should hopefully confirm my belief that it will be ready for a tour southwards (Spain, Morocco?) at Easter.

All going well except for a puncture. To my great surprise when I wheeled it out of the garage on Saturday the front tyre was flat. It’s a slow one, and there’s no sign of a nail or other object, so perhaps there’s a problem with the seal or the valve. I’m tempted to fit some TKC80 off road tyres, just in case Martin (R1100GS) and I make it to the Merzouga.