Through Extramadura and the Monfrague National Park. From the camp site at Plasencia the  mountains were still visible, but the greater heat signified lower altitudes and the approaching south. Above us, spriralling out from the rocks, vultures swooped and glided. Part 5 of the journal of my ride through Spain.

Shortly before entering the town of Plasencia the passing landscape had transformed quite suddenly into an unfamiliar pattern. The mountains gave way to more gentle slopes and plains, with views extended far across fields semi-cultivated with short and light trees. From the camp site at Plasencia mountains were still visible, but the greater heat signified lower altitudes and the approaching south. On our second evening a dramatic storm passed over, after winding its way for some time along the valley. We watched it approach, gambling upon the direction in which it would descend. And then the rain was heavy but brief, and failed to interrupt the warmth, which soon dried the ground and our tents.

It is this warm but damp climate that enables and sustains a unique environment. Extremadura is a little known corner of Spain, south-central and running up against the border of Portugal. Amongst two minority interest groups, however, it is famed and respected. Those great wide fields of trees once supplied much of the world's cork oak. To viticulturalists the bark of its definitive species of tree was essential. The landscape was until recent times shaped and dominated by that powerful industry. Disease and a move towards plastic "corks" has now weakened the link between landscape and industry in Extremadura. And that is bad news to the second interest group for whom this land is of importance. For wine consumers there may be justification in the use of modern materials as a means of sealing bottles. Plastic corks don't go bad. But they also don't sustain a rich diversity of wildlife. So the demise of the natural cork is regretted by the many naturalists who visit places like Parque Nacional de Monfrague.


Before settling upon the camp site in Plasencia, we had ridden all of the way through the park in search of accomodation. It was a bank holiday, and therefore quite busy. Half way through there is a a dramatic view from the road across to a rocky outcrop. Many people were at this viewpoint, pointing cameras, binoculars and telescopes into the air. We stopped and joined the spectacle. It was a sight that I have seen many times before, but only ever in Africa, and almost always in remote locations deep in the bush. Above us, spriralling out from the rocks, vultures swooped and glided. We spotted clearly two varieties, white backed and egyptian. The park also holds a population of black vultures, which may also have been in the crowded skies above. 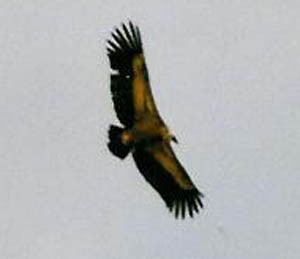 Our tally of vulture species was now at two. Add to that the numerous golden eagles, black kites, red kites, buzzards and falcons, and this had become an excellent expedition for raptor enthusiasts.

Next - the road into Seville.