A seizure, a bypass, and a very fast bike

How many goats must be sacrificed before beginning the starting procedure? In these modern politically correct times we no longer sacrifice virgins. Goats yes: messy but legal. Virgins no: messy, illegal, very much so. Such bloodlettings are only one of many requirements:

Starting a 13 year old BMW R100 GS Paris Daker desert racer without an electric starter motor is a fairly futile task. But occassionaly, thanks to BMW reliability, the task is unavoidably necessary. A single click from the ignition system had made the situation quite clear. The starter had seized. This might have been a side effect of a high speed 200 mile non–stop blast between Kenilworth and Dorchester the day before. But I suspect that the bike just realised that it was only 10 miles from its spiritual home (the dealer from whence it came). It is often uncanny in this manner.

And so, only a few minutes after deciding to give in and buy myself one of the wonderful new R1200GS rocket bikes, I was again back on track. Had I been riding a modern bike I would still be waiting for the tow truck. The R100GS was one of the last bikes to be equipped with a kick start, the idea being that electrics do fail quite easily when riding far out in its natural environment, the Sahara.

My arrival at CW's caused a minor stir. The GS–PD is a rare sight. Wally, top technical man, had come in specially to supervise work on what seems to be one of his favourites. In the past he has replaced the gearbox, shaft drive, brakes, one exhaust valve, and various other bits under warranty. Now being out of warranty (over ten years old), I would have to pay for a new starter motor myself: £175. I would also have to wait for a few days – not part of my agenda. Wally is also recommending that he fit a bypass to cut out the oil cooler, which is now rather old and a potential problem. Common wisdom claims that the cooler isn't really required, unless riding in the desert, and in fact the engine runs better without it. I have given him a Touratech bypas kit to apply.

Having amazed everyone with my kick–start miracle, I sat down for a while to chat with Wally and Neil. Wally has a theory about kick starting: it is a genetically inherited skill, or rather, some kind of primeval drive. Some people have it, other don't. He also claims that it guarantees success with the ladies! I'm not sure about that. But it certainly did get me tio CW's, from whom I departed a couple of hours later riding a loan bike. A very fast loan bike: a new R1150R naked roadster on which I could bimble around Dorset, ride back to Kenilworth, and then return in a few days to collect the GS PD. Excellent service as usual. 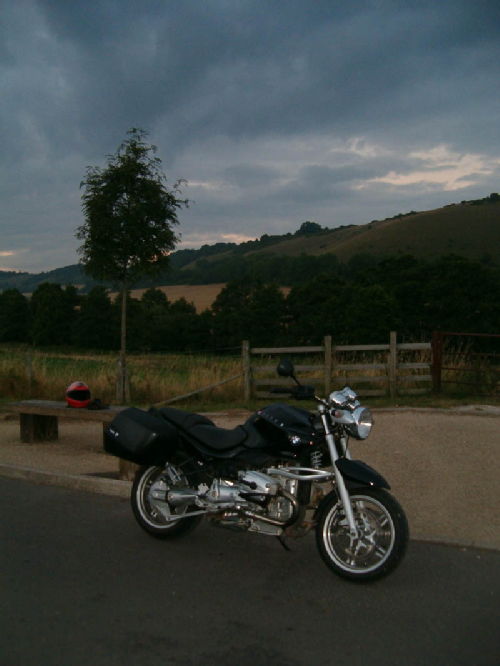 BMW R1150R – a sexy black naked roadster. Fast, manouverable, moderately comfortable (legs a bit too cramped). I even managed to get the front wheel to slide in a corner. The telelever front suspension is often blamed for this habit – it makes the bike much more stable, but also isolates the rider from the traction, making it hard to know when it is losing grip.

A visit to the acclaimed Crab House Café seafood restaurant on the Fleet, between Weymouth and Portland in Dorset. 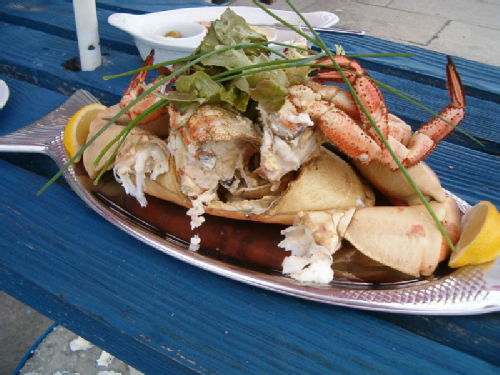 …moments later shrapnel from the first mighty hammer blow cut through the air, perilously close to the left ear of an otherwise relaxed elderly lady sitting at a table towards the other end of the patio outside of the small wooden shack. Health and safety? Protective goggles are definitely not provided as part of the small set of offensive implements delivered by the waitress alongside the vast decapod crustaceans that form the café's trademark dish. 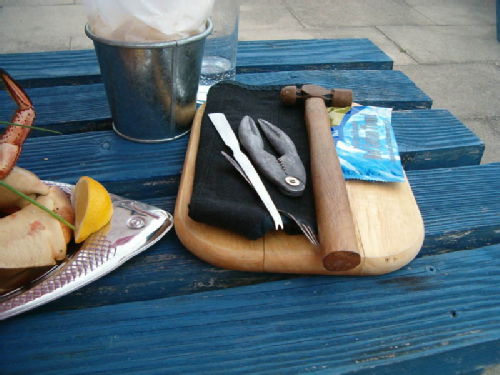 Implements for the job: authentically aged woodwork hammer, crushing board, crab pliers and flesh–prodder (for want of a better word).

A neatly folded apron is also included. I chose instead to become dressed with crab juice and flesh, smashed, splattered and spurted out of the claws and the legs of my victim. 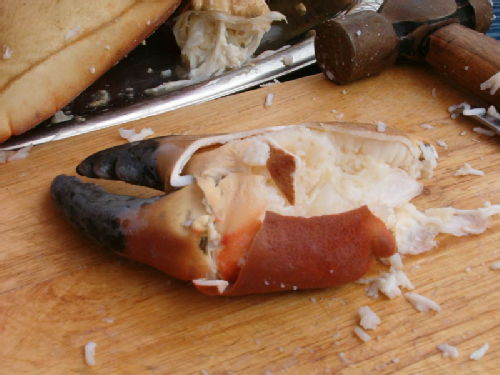 After an initial tentative attack, I retreated into the runny brown material within the natural bowl of the crab body. Unfairly described by some as 'grey gunge', a less than delicate taste of the sea (or in this case the Fleet lagoon) is the reward. Delicious whole grain bread helps to mop up the juices, while a few ink–dyed legs of octopus and olives added variety (nibbles provided while waiting for my main course). And then the onslaught really began. Half an hour later, with more calories lost than gained, I had ripped the monster crab to shreds, having extracted all of the good bits – some of them extremely good, the best being the firm pink point triangles pulled from within each claw. 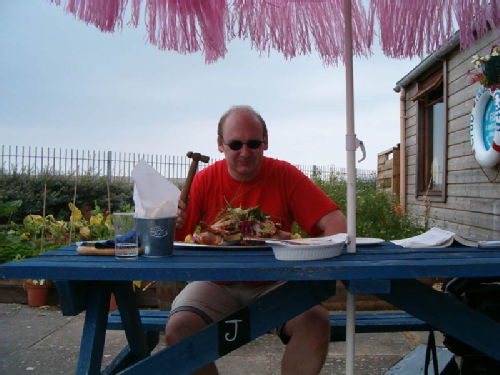 The Crab House Café is perhaps an odd candidate for being one of the trendiest restaurants of the moment. As John Walsh explained in his recent Inependent review, it is both basic and quirky. Straw hats are available for loan to diners, who may sit outside under pink plastic straggly retro–sixties umbrellas. But the food is excellent. Other diners were overheard heaping praise onto the variety of dishes consumed, including hallibut, skate, john dory, sardines, eels, bream and lobster. I chatted briefly to the manager and one of the chefs. They really know their seafood. They are also motorcyclists – a clear sign of cullinary genius.

Should I mention that the Hugh Whittingley Fearnley celeb pig farmer bloke rates it as one of his top seafood spots in Britain?