All entries for Saturday 05 November 2005

This year's NEC Motorcycle Show included an excellent facility. Around 30 different new bikes were available for half-hour test rides, organised by the British School of Motoring. I decided to have a go on the Ducati ST3.

Why the latest Ducati sports-tourer? I've never ridden anything quite like that before. I don't ride other bikes often, and since passing my test, I have only experience of:

Not a single one of which can do over 100bhp. So rather then choosing more of the same, given the chance I went for something completely different: 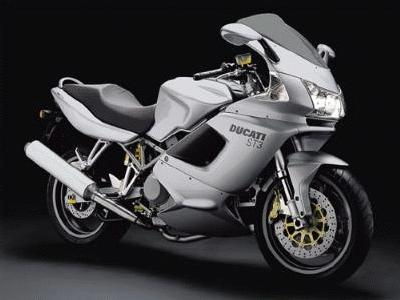 It is powered by a 102bhp 992cc 90° V-twin, with 6 Desmotre valves, and dual-spark electronic fuel injection. The traditional Ducati trellis frame, and stylish Italian design, relates it to the long history of one of the great bike manufacturers. But the electronics and high production standard make it very different. Perhaps too different. I had expected something special, something Italian. Unfortunately, it is to some degree an attempt to build a sports tourer as well as the Japanese. It probably is very much like a Honda VFR: smooth but tame. Even the engine note is rather dull. It is very much like the R1100RS that I once road, but less raw.

I might, of course, be expecting too much. Normally I ride an old GS, a very different bike. The GS has a clunky gearbox, but unlike the ST3, at least I can feel when the gearchanges occur. There's just very little feel from the Ducati. I'm also used to huge handlebars that give rapid manouvreability at any speed. Sport tourers are never anywhere near as responsive to counter steering as big trailees, but at the same time, not as physically flickable as a proper sports bike. The test route took in some dramatically twisty country lanes. I really struggled to get it around at speed. Add that to very poor Showa suspension (far too soft), I think that in this case Ducati have got it completely wrong.

As a Daytona rider recently told me, the GS can be ridden really fast because it is so easy to ride and steer. After riding the Ducati, I realise why the GS has such a reputation. I'm sure I can out-ride a Ducati rider on country roads any time.

Where the Ducati may beat the GS is in braking. The huge Ducati discs and calipers can stop it dead in an instant. But the GS brakes are perfectly progressive and keep the bike well balanced at all times, whereas the Ducati's are snatchy and unpredictable. Furthermore, under even gentle braking the weakness of the Showa suspension is revealed in a most alarming way.

I did enjoy having a go on the Ducati ST3. The test ride system is great, thanks to the British School of Motoring instructors runing it. Next time I will try out another very different bike. But I won't be trying out another ST3 or a sports-tourer. Compromise is, as often, a bad thing.

On Friday I visited the Motorcycle Show at the NEC. The number of off-road tourers and Dakar racers on show demonstrated just how significant the shift has been from sports racers to long distance trail bikes. 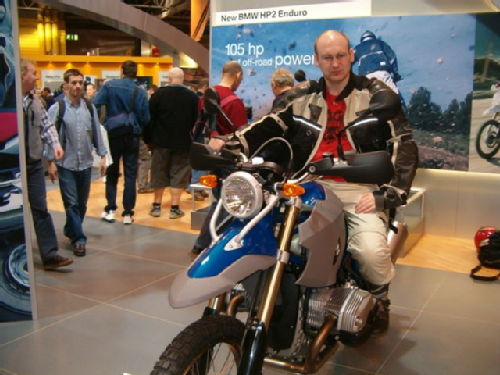 This photo was taken by Dave Halsall, Sales Manager of SBW Motorrad in Hertford. My meeting with Dave turned out to be yet another small world experience. Dave spent many years living in Gaborone in the Eighties, and knew our friend Blix. Dave also set up the first off-road track in Botswana. We talked about what it was like there before tarred roads and traffic lights.

The BMW display also included a BMW R1200GS Adventure although it wasn't available for sitting on. For the first time I got to see this beast for real. The bike is as wide as it looks in the press photos. Long range tanks are bolted onto the side of the standard tank, almost as wide as the cylinders. Near to this was an F650GS Dakar, just like the one I will be riding in SA in January. Of all of the big-trailees on show, I still consider the F650 to have the best geometry and riding position. On a long dirt ride, that's the most important requirement.

BMW were also proud to display a rather battered 1150GS Adventure: 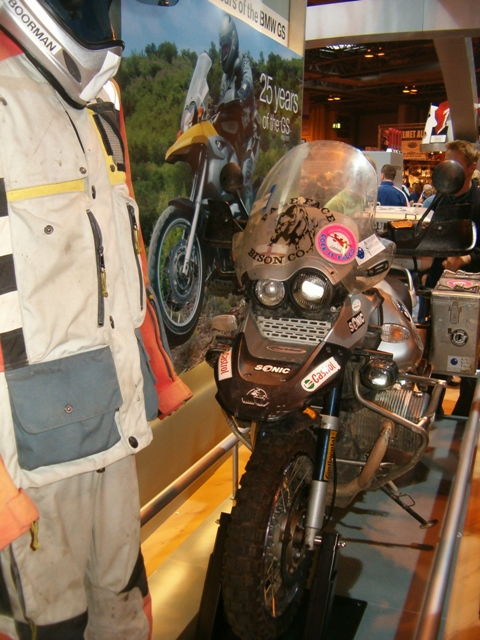 …as ridden (and dragged) by Charley Boorman and Ewan McGregor across Europe, Asia and North America in The Long Way Round expedition. Next to the bike is one of the BMW suits worn by the riders.

A little less battered, but threatened with a good thrashing soon, is the F650GS Dakar due to be ridden by Charley Boorman in the 2006 Dakar rally: 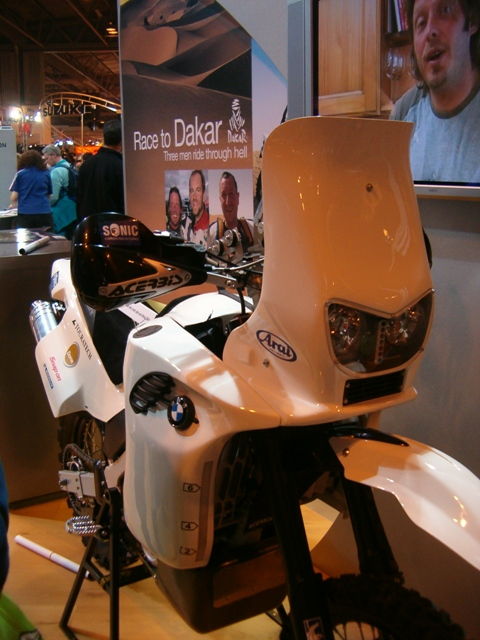 And finally, despite their sad attitude towards Ewan and Charley, I had to pay some respect to KTM, who displayed the bike on which Cyril Despres won the 2005 Dakar: 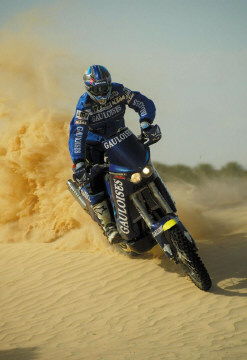 …and actually allowed me to sit on it: 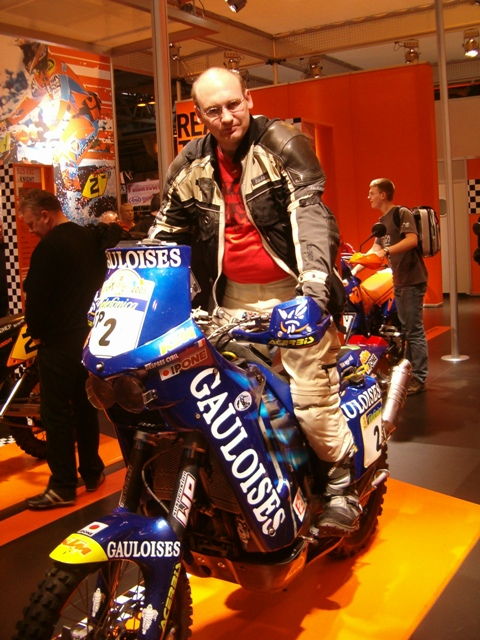