On Sunday I went for a ride out with another local GS rider, Steve from Harbury, who I met through the CW Motorcycles Rider's Club. Steve has had five different GS's, including an R1150GS Adventure, the same as that used by Ewan McGregor and Charlie Boorman for their recent Long Way Round trip.

Steve has ridden these bikes around most of Europe, and has some interesting travels to talk about. However, he now has something rather special, a new R1200GS just like the one in this photo… 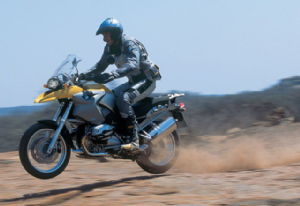 The latest in the 25 year history of BMW Gelande-Strasse bikes is a huge step forwards in the evolution of the most successful off-road tourer. Compared to my 1993 R100GS Paris-Dakar, it's more like a sports bike. 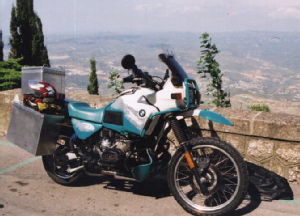 My old Dakar does have the advantage of a big 21" front wheel and a 35 litre long range tank. I also have an Ohlins shock which makes it handle really well off-road. But as we raced along the road to Moreton, the power difference was obvious. The new GS was able to make overtaking manouvers that I would never have even contemplated as possible. It's cornering stability was also quite obvious when viewed from behind, much more certain and smooth than the old bike. Even taking into account that this was my first fast ride since I got bashed on the head by debris in Spain, and was therefore holding back a bit, I would have had no chance of keeping up if Steve hadn't generously allowed for my sluggishness. Thanks Steve!

But speed isn't everything. As I rode through Leamington on the way home I pulled up next to an R1150GS at the lights. The rider looked at my old Dakar, and with deserving reverence said "that's a great bike, they don't build them as tough as that anymore".

To celebrate, I blasted it over a steep 3 foot high earthen ridge to get into my street via a blocked off short-cut. Just like a real Dakar racer… 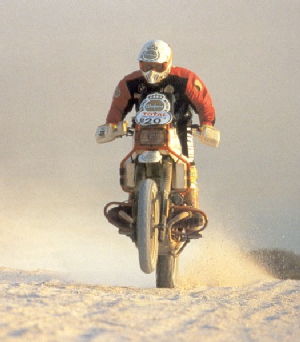 Two perspectives on migration and deterritorialization, the recieving milieu and the migrant…

I looked at myself in the same light, as a monkey given my life to play with, prodding it, trying to stretch it into different shapes, dropping it and picking it up again, suspecting always that it must have some use and meaning, tantalized and frustrated by it but always unable to make any sense of it. Ted Simon, Jupiter's Travels