Follow–up to "Modern algebra and the Poisson point process".

For networks of lines in general position, the answer is "yes", using an argument based on the ideas in the "Modern algebra and the Poisson point process" post. 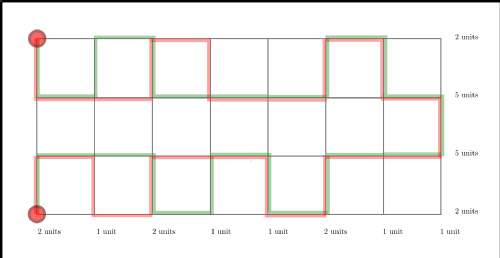 Here is a trivial fact about the Poisson point process, which I find curious because it links directly to a concept from modern algebra (the notion of a free abelian group).

Recall that a Poisson point process on the real line can be viewed as a (locally finite) random pattern of points. We can define it in terms of its consecutive inter-point spacing lengths, Zn for n running through the integers. If Z0 corresponds to the spacing containing the origin, then the Zn are independent, with all but Z0 being of unit Exponential distribution and Z0 being of Exponential distribution of mean 2. (The discrepant behaviour of the Z0 distribution is due to size-biasing, and is associated with the famous Waiting Time Paradox.)

If you are allowed to inspect closely the relevant realization of the unit-rate Poisson point process, then knowledge of the total length z is all you need to determine which are the spacings i1 < i2 < ... < ik that have been selected.

Indication of proof: the Zi's are independent with Exponential distributions (unit rate except for i=0, for which the rate is 2). But this means that almost surely the spacing lengths Zi generate a free abelian group under addition. In particular, almost surely

But the subject of statistics is like the magic pencils described in this charming story (less than 2.5 minutes); correct use will lead you to The Truth … .

The story is at the beginning of a full lecture on Youtube, and corresponds to Marie-Claire van Leunen's chapter 35 of Knuth, Donald E, Tracy L Larrabee, and Paul M Roberts. Mathematical Writing. Washington, D.C.: Mathematical Association of America, 1989.

Follow-up to Perches, Post–holes and Grids from Random Curiosities

It is not unheard-of for Stats MSc students to find their MSc dissertation leading to a publication, but rather less common for the publication to be a component of a book on early medieval history! But that's what happened to Clair Barnes' MSc dissertation ("Statistics in Anglo-Saxon Archaeology", Department of Statistics, Warwick, 2015); you can read all about it in:

Clair started off studying English Literature as an undergraduate at UCL, but then took an OU degree in Math & Stats while working after graduation. That led to a Warwick MSc in Stats and most recently to a return to UCL, working for a PhD in statistical meteorology at UCL. Statistical science leads to all sorts of unexpected adventures ...

My daughter-in-law Michelle is part of a team that has just published something rather interesting on controlling the epidemic. #VeryProudIndeed

I and my MSc student of two or three years back, Clair Barnes, produced an appendix, Perches, Post-holes and Grids, for a book being prepared by John Blair et al., arising from the project, Planning in the Early Medieval Landscape. You can find it on arXiv <https://arxiv.org/abs/1704.07342> of course! The appendix is aimed at demonstrating the application of statistical methods to the analysis of archeaological data, typically expressed in graphical form, with the objective of assessing the extent to which the spatial configuration exhibits planning by the original architects. Typical questions: did the builders use a common unit of measurement over a wide geographical region? to what extent is there evidence that they used a grid pattern when designing groups of buildings?

The name of the game is to contribute a statistical assessment to be mixed in with all sorts of other historical evidence. It's fun doing statistics in new areas like this: one learns a lot of stuff one didn't know before, and it provides a brilliant excuse to visit Anglo-Saxon Kingdoms <https://www.bl.uk/events/anglo-saxon-kingdoms> during the working week.

Some really good ideas being implemented recently about and around the idea of crowdsourced data, For example:

Of course the cartoonists got there first: 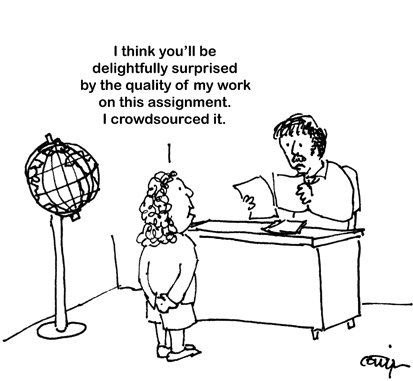 Lots gets said about the importance of open-access publishing. Researchers are under pressure to publish papers which are "Gold Access" (translation: they pay the publisher quite a lot of money so that the paper can be accessed freely by all and sundry). Many people discussing this, and/or making policy decisions, appear not to have noticed that in many research fields new work is invariably released as a freely available preprint using the wonderful arXiv <https://arxiv.org/>, for which the publication cost is extremely low (mostly met by academic institutions). For example virtually all of my work of the last 14 years can be found there using <https://arxiv.org/a/kendall_w_1.html>.

Today in the ST116 group we discussed how to build strong passwords. A good exposition can be found in the xkcd cartoon referenced as the weblink for this article.

The media has a problem with uncertainty

Not just the media, but it's a fair point. Have a look at what Nate Silver has to say.