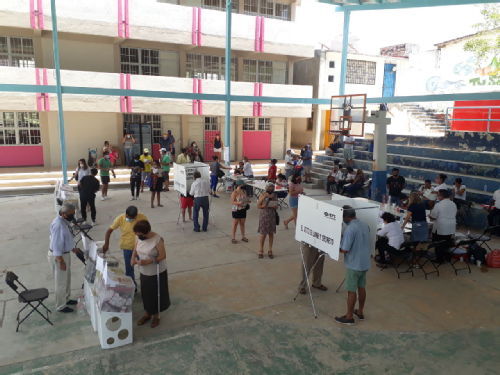 On June 6, 2021, Mexico experienced the largest elections of the country’s history. According to the National Electoral Institute (INE), 93 million Mexicans were eligible to vote on governorships, a new lower house of Congress and thousands of mayoral and local legislator posts. While Mexico’s president Andrés Manuel Lopéz Obrador (known as AMLO) was not on the ballot, last week`s mid-term elections were largely a referendum on his policies and decisive for the remaining three years of his presidency. Central to the success of his term in office will be his ability to deliver on economic development, guiding Mexico out of the Coronavirus slump. So far, however, the Mexican president has been known for his intolerant and impulsive decision-making. Meanwhile, his illiberal populist policies have not only failed to deliver on made campaign promises, but threatened Mexican checks and balances. As the country has been plagued by years of short-sighted and non-inclusive economic development policy, AMLO’s style of politics is paradigmatic of Mexico’s failure to live-up to its economic potential. Instead of developing a long-term strategy, the Mexican president puts personal interests first, promoting a short-sighted and unsuccessful strategy to combat poverty, crime, and corruption.

In 2018, AMLO entered office with a landslide electoral victory, making populist promises to the poor, advocating an economic nationalist stance, and promoting a state-centred economic model. Three years into his presidency there is, however, no sign of economic development, as the Mexican economy stagnated at -0.06 per cent GDP growth in 2019, while suffering a devastating decrease of over 8 per cent in GDP growth in 2020 due to the Covid-19 pandemic. However, instead of investing into the education and health system to promote economic development and prospects for Mexico’s youth, AMLO has been cutting down on essential funds in research and development as well as in cultural and social institutions, arbitrarily redirecting the money to Mexico’s poor. For instance, rather than establishing targeted skill development, tutoring or entrepreneurship programmes, and attracting investment to create long-term job opportunities, the Mexican president implemented a programme of non-targeted and unconditional transfer payments to Mexico’s high percentage of youth not in employment, education or training (so called NiNis). Hence, rather than finding long-term solutions to the Mexican economy’s challenges, AMLO convinces his people with populist claims and short-sightedly treats symptoms of a sick economy, which brings in votes but does not provide development prospects for Mexico.

Judging on the first three years of AMLO’s presidency, he is about to join a group of former Mexican presidents – from different political camps – who failed to reach long-term economic growth and inclusive development in the country. Throughout the 1980s, Mexico experienced a drastic shift in economic policy away from a developmentalist approach towards economic liberalisation. In subsequent years, Mexico opened-up its economy, influenced by US-trained technocrats, following the playbook of the Washington Consensus. While in the short-term trade liberalisation had positive effects on increasing exports and FDI inflows, it failed to significantly improve long-term inclusive economic development in Mexico. Over the last two decades, universal access to education was established, yet, there are large regional differences in the quality of education and only half of students attend upper secondary education. In addition, the labour force participation rate for women is far below that of men, and low in comparison to other countries within the OECD as well as in Latin America. Meanwhile, total factor productivity has had no positive impact on overall economic growth, indicating extremely limited productivity growth in the Mexican economy. The consistently high rate of migration to the US can be interpreted as a symptom of the limited economic opportunities in Mexico. While AMLO explained the increasing number of migrants, referring to US president Biden's friendlier migration policies, the motivation of many Mexicans to cross the border rather lies in people’s dissatisfaction with the economic prospects in their home country and the hope for a better life.

Looking back at the mid-term election results, while the president’s ruling party Morena (National Regeneration Movement) has lost its supermajority in the lower house of Congress, it will hold on to power in coalition with the Labour Party and the Ecologist Green Party of Mexico. However, the ruling coalition falls short of a two thirds majority, thus, unable to make amendments to the constitution, which are necessary to push forward the president’s ambitious agenda. Yet, far more significant for the assessment of Mexican development and its state of democracy are the following numbers: since the beginning of campaigns in September 2020, the political risk consultancy firm Etellekt registered 100 assassinations of politicians, 36 of which were candidates, as well as over 900 acts of violence against politicians, ranging from verbal threats to kidnapping of and violent attacks on politicians and their family members. The violence is mainly motivated by drug cartels, seeking strategic power in local municipalities.

For decades, Mexican governments have struggled to put an end to organised crime and violence. Yet, insufficient economic opportunities in the formal economy and weak state institutions create patterns of incentives that strengthen the power of drug cartels. In addition, the ties of organised crime go deep into Mexican politics. In one of his morning press conferences, AMLO stated that there is no war on drug trafficking anymore. Unlike his predecessors, the Mexican president changed the strategy to tackle organised crime with “hugs not bullets”. In other words, he follows the approach of alleviating poverty and thereby diminishing the incentives to turn to drug groups in absence of state presence. Yet, his strategy lacks clear measures to directly address the power of organised crime in Mexico. On the contrary, instances like the bungled and brief capture of the son of Mexican drug boss “El Chapo” Guzmán in October 2019, or AMLO’s controversial handshake with Guzmán’s mother raise doubts about the Mexican president’s allegiance. In addition, various candidates of Morena are wanted in the United States. For instance, in the state of Guerrero, Félix Salgado Macedonio (Morena), the former candidate to the governorship and father of the new governor-elect, Evelyn Salgado (Morena), has been investigated for being involved in organised crime in the state’s largest city of Acapulco as well as on various accounts of violence and abuse. Despite these heavy allegations, AMLO defended Salgado. Furthermore, Mexico’s impunity rate of over 90 per cent gives drug cartels plenty of rope.

All in all, Mexico still has a way to go on the route to development, as it faces deep gender inequalities, significant deficiencies in the education system and lacking economic perspectives for its youth. Changing governments have not allowed for continuity and a long-term strategy in economic development that is focused on creating economic opportunities for its people. Meanwhile, the influential position Mexican drug cartels hold in politics and society is incentivised through patterns of corruption and impunity, and lies at the root of Mexico’s problems. Yet, instead of fighting the power of drug cartels through strengthening state institutions and the rule of law, the ties of organised crime go deep into the ruling party’s members.

Fabian Tigges is a Postgraduate student of International Political Economy at the University of Warwick and of Politics and Public Administration at the University of Konstanz. His MA dissertation was titled “From Austerity to Recovery Spending: Contemporary Economic Thought in Times of Crisis”. Since October 2020, he is an executive board member of the Warwick Global Development Society (WGDS). He is also a student Research Assistant at the chair of Political Science and International Politics of the University of Konstanz.