Language is a Tool for Youth Exclusion in the Niger Delta 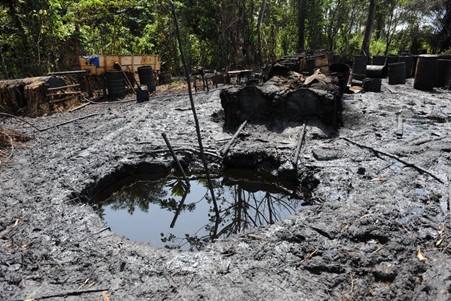 Like many young people in the Niger delta region of Nigeria, Timi[1] felt great optimism about the future in 2009. This was the year the federal government announced the Presidential Amnesty Programme for young people in the violence-hit region in the southern region of the country. Youths who had been involved in the Niger delta violence were paid under this programme to drop their arms, with the additional promise of employment and regional development.

The violence erupted after years of the oil-producing communities complaining of developmental neglect and environmental degradation, while the Nigerian government and oil companies make profits from oil exploration.

The Niger delta is one of the most oil-rich regions in the world. Most of Nigeria’s wealth comes from the sale of the oil produced here. But despite this oil wealth, the Niger delta lacks real transformation. A clear indicator of this stunted development is the lack of good roads and reliable electricity in the region, including in its major cities.

Many youths in the Niger delta are also unemployed. And rising levels of pollution from recurrent oil spills is putting local livelihoods and health in further danger.

As a result of these concerns, youths in the Niger delta began in 2003 to violently resist the oil industry, challenging their exclusion and demanding the development of their region.

Given this background, many have urged the government to create development agencies and programmes like the Presidential Amnesty Programme to integrate the region’s young people into the national development agenda.

My research finds, however, that the development agencies in the Niger delta are having limited success in including youths in the benefits of oil.

Language as a tool of exclusion

In this study, I interviewed 84 youths in the Niger delta. I also interviewed 19 development agency representatives from the Niger Delta Development Commission and the Presidential Amnesty Programme.

My findings show that institutional representatives use language to exclude young people from sharing in the benefits of oil.

Language and domination are intimately related. By using harmful language permitted by society, we can marginalise vulnerable groups, while enabling more powerful groups to maintain their power. Interestingly, those who bear the brunt of discriminatory language sometimes accept the negative language, and are complicit in their own oppression.

This phenomena is described by the French sociologist Bourdieu, as ‘symbolic violence.’ It’s a situation whereby dominant language accepted to be true by society is used to discriminate and exclude a group of people who accept but also resist that language.

There are three ways in which these dominant beliefs and ways of speaking about youths enable their exclusion while simultaneously allowing institutional representatives to maintain their power within the development agencies.

First, many institutional representatives believe that older people are wiser, and therefore more suitable for leadership. Young people on the other hand are often portrayed as lacking wisdom and leadership capabilities. In some instances, young people have come to internalise and accept this misconception.

However, some youths challenged this idea. One respondent pointed out that many past military heads of states in Nigeria led the country in their youth. They pointed to the example of Nigeria’s current president, Muhammadu Buhari, who first ruled Nigeria under the military government at the age of 41.

Still, this language used to describe young people deterred them from occupying leadership positions within the development agencies. As a result, more older people occupy higher positions of power within the agencies.

If you give them a job they don’t want to work, they are just lazy.

Portraying young people as lazy distracts from other causes of unemployment in the region, including graft. This language of ‘laziness’ also effectively functions to constrain the accountability of development agencies for failing to create jobs and improve lives.

This negative language of laziness helps perpetuate the economic domination of older people because it presents them as hardworking people who are deserving of their wealth.

Finally, institutional representatives also perceived young people as criminals with destructive tendencies. This negative portrayal casts doubts on young people’s credibility, and it puts them at a disadvantage when contesting for public office. It also means that older people are recognised as morally superior and worthy of public service. Language like this clears the way for the older generation to continue to hold on to power and decision making, while excluding young people. One respondent’s comment serves as an example:

You may not understand what I am saying because you are young. There will be a problem in the communities, sometimes they bring it to us and we have to decide what to do. You have to know about the people, their history, even the culture … Young people, many of them don’t know the culture.

These seemingly natural ways of speaking about Niger delta youths dictate who is valued and who participates in the decision-making processes within development agencies in the region.

This harmful use of language puts young people at a disadvantage because it assumes that the older elites are better than the youths. And it justifies the economic, political and social domination of the elites in the oil development process.

The study findings raise questions about whether distributive interventions alone can enable the equitable participation of youths in the oil development process.

Distributive agencies remain crucial channels for achieving a more equitable distribution of oil profits. But without confronting the cultural and social barriers that limit young people’s participation in the oil development agencies and programmes, young people like Timi will continue to be left behind.

Dr Modesta Alozie is the Lead Research Fellow on the Data and Displacement Project at the Department of Politics and International Relations University of Warwick, UK. She also teaches the Politics of Globalisation at Warwick. She holds a PhD in Development Planning from University College London. Her research interests are in oil politics, climate change and digital humanitarianism.