Globalisation allows an unprecedented exchange of human resources across the world. This is the future of research and education. Enterprises, Universities and research institutions take huge advantage of this movement, but they must equally take responsibility and work hard to protect the rights of the people who move in search of knowledge and educational attainment. However, they are less likely to effectively protect their students or staff, their researchers in particular, when political interests and divisions prevent or at best limit their efforts. The murder of Giulio Regeni and the detention of Patrick George Zaky illustrate this and present a call for common action.

Giulio Regeni was a doctoral student at University of Cambridge. A brilliant Italian student in his 30s who moved abroad to carry on studying and doing research, like many others. The topic of his research was street vendors’ trade unions in Egypt, where he was arrested, tortured and killed in Cairo four years ago (1). To date nobody has been held accountable for his death. Five agents of the Egyptian security service are suspected to be his murderers (2); and the trial is on-going amidst misdirection from Egyptian government, lack of action from Italy and an embarrassing silence from the University of Cambridge.

The 7th February 2020, Patrick George Zaky, an Egyptian student at University Alma Mater of Bologna, Italy, was arrested in Egypt accused of ‘harming national security’. He is an Erasmus Mundus student on a Masters in Women and Gender Studies programme, and a human rights activist (3). Patrick is still in a prison in Mansura, Egypt. Unlike Regeni’s case, the University of Bologna Chancellor, Prof. Ubertini, and town authorities have carried out campaigns in Bologna with more than 5 thousand people, asking for Patrick to be freed. Media pressure could be crucial this time to save his life. Other consortia of Universities across Europe have signed petitions in solidarity with the appeal by Bologna University requesting the liberation of Patrick, as this is an issue concerning the right to education and safety of all researchers and students around the world (4).

The murder of Giulio Regeni and the detention of Patrick Zaky call for all HEI to work for unity of visions and efforts in order to make sure that all students and researchers, all citizens in the community of education, are safeguarded, regardless of nationality. Here is where excellence is at stake. Excellence and leadership in research are not measured only by algorithms and funding pots. It is a matter of integrity and ethical commitment. And we all are committed, as students and academics, to speak out for Patrick. If we can join our voices perhaps ‘this time everything will be all right’. 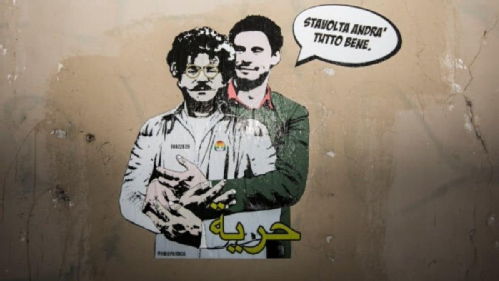 Italian artist Laika’s mural appeared in Rome, via Salaria, not far from Egypt’s embassy, between 10 and 11 February. It featured Giulio Regeni protecting Patrick Zaky and telling him ‘This time everything will be all right’, and the Egyptian word for ‘freedom’.