“I won’t die of corona. Before that, I will surely die of hunger”

On March 11 2020, WHO declared the coronavirus disease 2019 (COVID-19) outbreak a global pandemic. Governments were urged by the WHO to make urgent decisions to reduce the spread of this new disease. These decisions are being made with scarce data and in a politically pressured context. Three things jump out for us in the cacophony around COVID-19: the importance of governance regimes that frame it and are being (re)shaped by it, its effect on our (im)mobilities[1], and the deepening of social inequalities in this time of crisis.

Under pressure and in phases, governments have been announcing compensation packages for different groups of employed (and/or soon to be unemployed) people; “I won’t die of corona. Before that, I will surely die of hunger” or similar was said by many people to Harsh Mander (Delhi activist) as India went into lockdown without any warning and thousands of daily wage earners were left without an income and in numerous cases a home. The Finance Minister declared, ‘no one will go hungry’ and offered 25 million poor women 500 Indian rupees, 5 kg of wheat or rice and 1kg of preferred pulses per month for the next three months to run their households; stretching this meagre resource to feed the family is not going to be an easy task.

Similarly, across the world, the swift action and centralised planning required for an effective response to COVID-19 is being used to justify authoritarian and violent responses against populations in need of protection. A recent article in the Guardian newspaper describes the use of tear gas in India, police shootings in Kenya, and degrading treatment by police to punish curfew ‘violators’ in the Philippines. A statement by 13 European Union Member States on the 2ndof April said they are “deeply concerned” about the use of emergency measures to tackle the coronavirus outbreak. Not only is the current crisis being used by such governments to justify these acts of violence, but it is normalising undemocratic responses to crises more generally, which affects us all. These effects, however, are not evenly distributed and it is the poorest and most vulnerable who are most affected by lockdowns and authoritarian responses. Those who cannot work from home, or do not have secure contracts or protected salaries rely on being able to travel to find work and to respond to employment opportunities as they arise. A Save the Children report details how families in such contexts have little to fall back on, are unable to stockpile, and some may live in informal settlements which is likely to compromise security and wellbeing during lockdowns. Human Rights Watch has described the extraordinary challenge facing rural-urban migrant workers in India as they have been left without support by the Indian Government, which is failing in its responsibility to protect its citizens, a challenge which faces many other governments across the world.

Since the outbreak of the novel coronavirus, over 130 nations around the world have turned to migration management strategies that make refugees, asylum seekers, stateless people, and migrants particularly vulnerable at this time. Across Europe and the globe, countries have closed borders and put strict movement restrictions into place. For those seeking asylum or temporary migratory work, such constraints directly threaten their access to healthcare, safety, and livelihood. Some states, like Portugal, have temporarily extended full citizenship rights to asylum seekers in order to ensure healthcare access. Others, however, such as the United States, have halted asylum claims all together, violating international law and putting individuals at risk. In refugee camps, hundreds of thousands of others, from Rohingya Muslims in refugee camps in Bangladesh to Syrian refugees in the Za’atari and Azraq camps in Jordan, have tried to adapt to the ‘new normal’ in accordance with COVID-19 prevention measures. However, for those living in overcrowded camps with limited access to sanitation, hygiene and social distancing guidelines can be difficult to abide by. Everyday life, as we have argued above, is deeply gendered, making women particularly vulnerable to limited access in times of crises. Long distances to healthcare facilities and lack of provisions only add to the risks for people on the move. For example, the Kakuma refugee camp in Kenya is home to over 190,000 displaced people, yet it has just 25 beds for those who contract coronavirus. As the pandemic continues to take shape around the world, it will undoubtedly weave its way camps and settlements across the globe. On April 2nd, authorities in Greece marked the first known case of COVID-19 in a refugee population and promptly locked down the camp. Given such circumstances, as the UNHCR recently stated, the humanitarian community must ensure that the rights and care of migrants, asylum seekers, refugees, and those on the move are protected during such precarious times.

Non-state responses to the crisis have been mixed; while thousands of people are volunteering to help, we also hear about sectarian, violent and unneighbourly responses to it. The length of lockdown will no doubt affect these responses. The question is whether coordinated, democratic and just responses can emerge and counter the authoritarian crackdown we have seen in some countries. COVID-19 is a global crisis and requires that we respond globally to redistribute resources, equipment, and knowledge not only within countries but between them. If not, the legacies of the current crisis will go well beyond the immediate tragic human loss of life and radically alter the way the governments can justify violence against their own people, and the way the most vulnerable in our communities are treated.

While the virus itself seems to be more dangerous to men than to women, the response to the virus may disadvantage and endanger women particularly – for example, 83% of nurses and midwives in India are women and therefore more exposed to the virus as part of their work. The Institute for Fiscal Studies reports that women, the lowest paid and under 25s are most likely to suffer a decline in living standards due to the lockdown. Lockdowns have also increased women’s burden of domestic and care work; it is not surprising that we are seeing a spike in violence against women and girls in this period of stress, anxiety and increasing poverty combined with lock-downs cutting off escape routes, reducing community safeguarding and preventing time apart to defuse situations. Anxiety is also generating a language of war, which feminists have argued always sets up a hierarchy of needs where women are marginalised or overlooked; urgency privileges the status quo. And status quo is what we do not need just now; what we do need is a change of political discourse that recognise care as work and supports it not with platitudes and ‘clapping for carers’ but with long term and adequate resources that build our social infrastructure. This is a global pandemic and gender inequality is a global issue; both need global solutions that pivot away from short-termism towards investing in health and in equitable and accountable governance. This can only be done through holding governments accountable to delivering a gender sensitive and equitable social infrastructure that will support the needs of all, and not just the few. 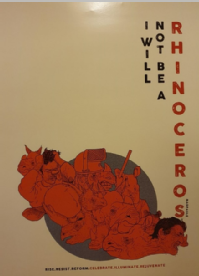 One outcome of this crisis could be the further loosening of regulation on key issues - the environment, group discrimination, targeting of migrants andethnic minorities as sources of the virus or spreading it because of ‘cultural’ differences, health and safety and minimum protections - in the name of reviving the economy. In his play Rhinoceros Eugène Ionesco reminds us of the threat of being swayed by a nefarious ideology as a contagious disease – Rhinoceroization. Today’s crisis is also being mobilised by right-wing populists, through communalising public discourse, garnering more power for individual leaders, overlooking many vulnerable communities, and through undermining democratic institutions. This could lead to a rollback of hard fought and won rights, which must not be allowed.

We could, of course, also see a more radical and progressive visions of how we function as a global society, from a slower pace of life, to alternative ways of working, to supporting our public social infrastructure and a more equitable distribution of resources. Already, there is a growing sense of people respecting what public institutions such as the NHS can do to help us in this time; the welfare state is needed to support the growing ranks of unemployed and the charities continue to be a third sector helping the most vulnerable. As after World War II, there could be a recognition that the state and society have to be critical actors in the economy, that participative politics is valuable and needed to hold states and businesses accountable and that ‘the big society’ is not just a slogan but is supported by a social infrastructure for all who wish to contribute to building a caring and equal society. As a recent Financial Times editorial underlined: "Radical reforms - reversing the prevailing policy direction of the last four decades - will need to be put on the table. Governments will have to accept a more active role in the economy. They must see public services as investments rather than liabilities, and look for ways to make labour markets less insecure. Redistribution will again be on the agenda; the privileges of the elderly and wealthy in question. Policies until recently considered eccentric, such as basic income and wealth taxes, will have to be in the mix."

Which of these competing visions take hold will determine how we deal with the post-COVID-19 world and its complex needs.