Tokens for the Eleusinian Mysteries

The intersection of imagery between tokens and coins in Hellenistic Athens remains an understudied phenomenon. It has previously been thought that tokens functioned as substitute for coinage or as an alternative currency according to a ‘functional’ approach. A more semiotic approach to these objects has underlined the obvious verisimilitude of Hellenistic tokens to the moneyer’s symbols of Athenian New Style coinage, identifying the common imagery used by a wide set of media, which included tokens, coins, weights and measures, as well as bronze allotment plates (pinakia). 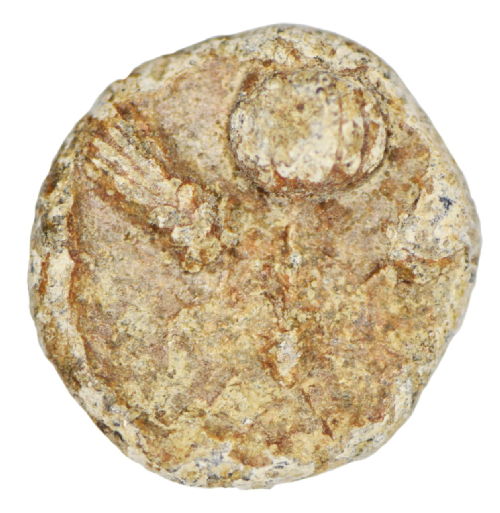 A token, shown above, struck only on one side with a poppy head between two ears of wheat and recently studied in the University Museum of Göttingen, returns to this question. The type follows closely coin types of the 70s BC. (J.H. Kroll with contributions by A.S. Walker, The Greek Coins, The Athenian Agora, vol. 26, Princeton: American School of Classical Studies at Athens, 1993, 118; 133-134). It is very probable that two different but closely associated workshops prepared two distinct sets of dies. The fact that dies for tokens have to date never been found, in conjunction with the evidence that indicates a continuous circle of disposing of the old tokens and recycling them, points to the fact the polis carefully controlled the production of tokens.

Among the tokens with ‘coin imagery’ a particular group stands apart. These are the tokens that fully copy or closely follow the imagery of Eleusinian coinage, struck in the name of Eleusis and likely connected to festivals. The ‘poppy-ear wheat token’ is one of them. But the ‘kernos’ or ‘plemochoe’, a type of vessel, is a far more popular ‘Eleusinian’ device on tokens.

Two such tokens showing a kernos are also found in the University Coin Collection of Göttingen, shown above. Remarkable also is a bronze token with a kernos on the reverse, accompanied by the legend ΔΗΜΟΣ ΑΘΗΝΑΙΩΝ, ‘the demos of Athens’ (Svoronos 1898, 124). The vessel is also attested as a countermark on a lead token of the letter series (Crosby 1964, L5). The kernos appears for the first time on Athenian bronze coinage (hemiobols and chalkoi) of the period following the evacuation of the Macedonian garrisons from the forts of Attica in 229BC.

The last day of the Eleusinian Mysteries was called ‘Plemochoai’, named after these particular vases, which were used ceremonially. A. Dumont has suggested that tokens carrying these designs could have been used in the Eleusinian Festival. The circumstances could have been similar to the ones that prompted the ‘ΕΛΕΥΣΙ coinage’, the coins carrying a reference to Eleusis. Perhaps tokens were employed as credit when the appropriate money was not available. Or – more probably – tokens were issued by the Boule and the magistrates responsible for the Eleusinian Mysteries or the panegyriarch, who presided over the panegyris (assembly) related to the festival. Today ‘kernos-tokens’ have been found in and around the tholos of the Agora in Athens.

The connection of tokens to Athenian Festivals in the Hellenistic Period is also attested through another important find: all the ‘Panathenaic Amphora – tokens’ have been found very near the so-called Arsenal, on the North side of the Agora, the only building which contained sherds of Panathenaic Amphoras.

This month's entry was written by Mairi Gkikaki as part of the Token Communities in the Ancient Mediterranean Project.

M. Gkikaki, 'The Collection of Athenian Lead Tokens at the University Museum of Göttingen' (SchwNumRu forthcoming)