In the two centuries following the tetrarchic reform of Diocletian (AD 293-305), tokens continued to be regularly produced in the Roman West for a variety of purposes. Given their religious and social-cultural value, the evidence of late antique tokens and coin-like objects helps us to understand the gradual religious transformation within the Roman Empire of the fourth and fifth centuries AD, allowing us to trace wider patterns in the shift from a pagan to a Christian culture. Nevertheless, the connection between tokens and late Roman religious communities remains a relatively unexplored or inadequately understood phenomenon. 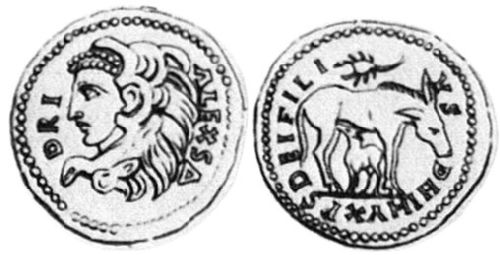 Remarkable is the bronze token shown above (Fig. 1), described in 1719 by B. de Montfaucon and held at the Département des Monnaies, Médailles et Antiques (at the BnF) in Paris. It was part of the collection of the Roman antiquarian Marcantonio Sabatini and was purchased by Abbé Le Blond, who brought it to France. This token carries on the obverse the bust of Alexander the Great left, wearing lion’s skin, with the legend ALEXSΔ-DRI; on the reverse is a donkey suckling a foal with a scorpion above, accompanied by the Christian legend D N IHV XPS DEI FILI-VS (“Dominus Noster Jesus Christus Dei Filius”). 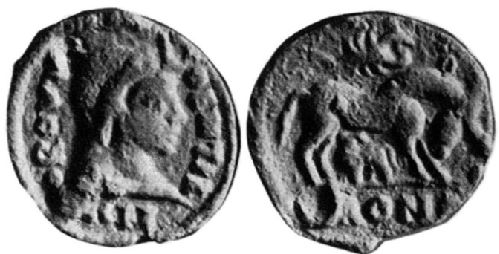 These Asina tokens named for the donkey suckling a foal, which appears depicted on 4 other pieces. On the two specimens shown above, both housed at the British Museum, the donkey type on the reverse is accompanied by the legend ASINA (Latin for a donkey) (Fig. 2a), or the legend ROMA in the exergue (Fig. 2b). On the obverse of Fig. 2a is the portrait of the Roman emperor Honorius with the Urbs Roma Felix style, while in Fig. 2b the obverse carries a female bust with a crown ending in a crescent shape (Isis?) right, with the legend PROVI–DENTIA and R M below the bust.

Although the donkey was generally considered in the ancient world to be a symbol of fertility, a sacred animal, and an attribute of deities (e.g. Seth, Dionysus, Silenus, Vesta, Priapus), the image of the donkey suckling a foal is an unicum (unique) and has no comparanda in the material and visual culture of the Greek and Roman periods. According to some scholars, the Asina type might be an indirect satirical allusion to Jesus, who was mocked by pagans as a god with a donkey’s head (H. Tanini 1791; A. Alföldi 1951) (Fig. 3). By this hypothesis the “Asina coins” might be considered anti-Christian medals, part of a covert pagan propaganda against the oppressive policy of the emperor Honorius towards polytheistic cults. 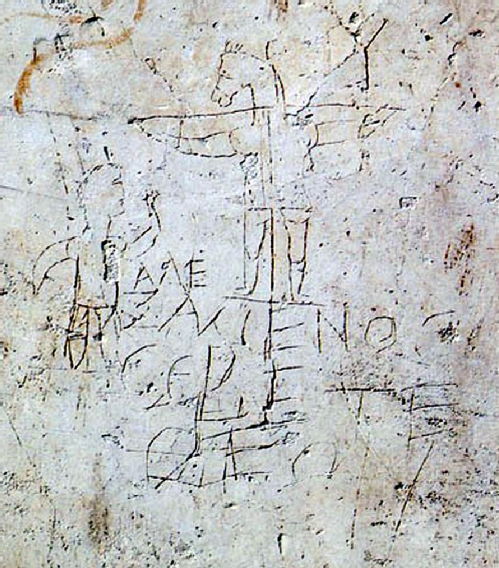 However, historical and numismatic considerations oppose this interpretation. Other late antique tokens, like the so-called “Festival of Isis coinage” and the “contorniates”, carry pagan iconography and were used in the late Roman world despite repressive measures by the Christian empire. Although they too were interpreted by the early twentieth century scholarship as instruments of pagan propaganda, more recent hermeneutical approaches suggest instead that these coin-like objects had to be multifunctional. They were produced by a complex religious world, in which the categories of ‘Christian’ and ‘pagan’ are neither as homogeneous nor as mutually exclusive as is often assumed. Moreover, the contorniates often show Christian symbols (the cross, the Chi Rho monogram), portraits of Christian Roman emperors (e.g. Honorius, Theodosius II, Valentinian III, Majorian, Anthemius), and even Christian graffiti engraved on the surface of the pieces after their manufacture (Fig. 4). 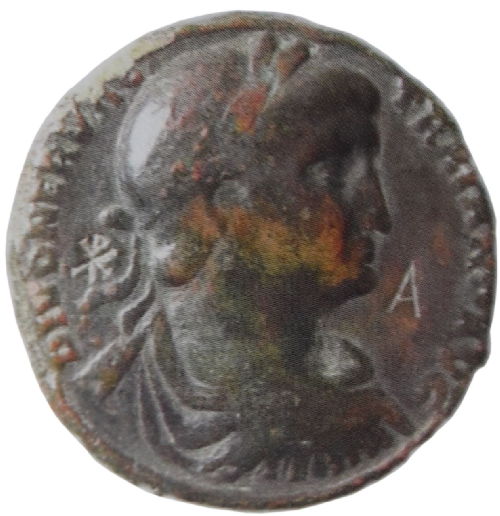 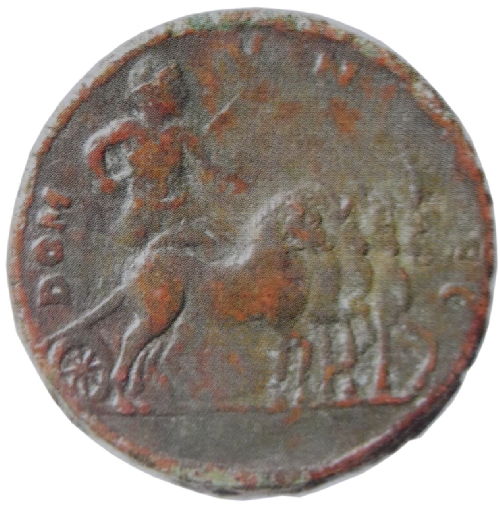 In light of the above, should the “Asina coins” be considered as an expression of satire or religious koine? The combination of Graeco-Roman and Christian features on the Asina tokens suggests how complex the relations between pagans and Christians were in late antiquity. At this moment in history religious groups interacted along a variety of axes, which at times lead to conflict, and at times competition, but which, above all, was a form of coexistence.

This blog was written by Cristian Mondello, a British Academy Visiting Fellow at Warwick.

This research is supported by the British Academy’s Visiting Fellowships Programme under the UK Government's Rutherford Fund.

A. Alföldi, A Festival of Isis in Rome under the Christian Emperors of the IVth Century (Budapest 1937).

The Emperor Decius came to power in late AD 249 having killed his predecessor, Philip the Arab, in battle (Potter 1990, 40-45). This manner of succession was far from unusual for the period. By this time no Roman emperor had died of natural causes for a little over a hundred years. As such a Roman citizen could be forgiven for believing their new leader’s reign would be as short, and end as messily, as those that had filled the preceding century. Whilst said cynical citizen would have been entirely correct (Decius and his son were killed in a swamp fending off marauding Scythians a mere two years into his reign according to Zosimus) this was not an opinion the new emperor was keen to encourage. As such he commanded all citizens to make sacrifices to the gods for the health and stability of the empire and concurrently issued a series of coins, now known as the ‘Divi series’. This series of coins is remarkable because they do not, as we would expect, feature the image of the new emperor – a feature we know provincials regarded as distinctive in Roman (as opposed to local) coinage (Mark 12:17). Instead on the obverse they picture the faces of eleven of his predecessors, crowned with radiate crowns; Augustus, Vespasian, Titus, Nerva, Trajan, Hadrian, Antonius Pius, Marcus Aurelius, Commodus, Severus and Alexander (Ando 2000, 209). The image on the reverse of the coins varies, however most commonly they feature either an eagle (a representation of apotheosis, perhaps most notably seen on the Arch of Titus in Rome) or an altar – presumably to the divine emperor shown on the obverse. This is reinforced by the coins’ respective legends which, on the obverse, give the pictured emperor’s name with the prefix ‘Divo’, meaning divine, and on the reverse read ‘consecratio’, meaning consecrated. Notably we have examples of these coins from mints across the empire, not just from Rome, suggesting that Decius was keen for them to be viewed by as large a number of people as possible. They would seem to be the Roman equivalent of a public Facebook post, rather than a message meant for those immediately around the new ruler.

Imperial portraits also played a key role in the sacrifices Decius demanded for the empire’s continued stability. Whilst the deities sworn to varied from town to town across the empire’s provinces (Tertullian To the Nations 2.8.7), with Roman religion being flexible enough to incorporate local deities from far flung reaches of the empire, each ceremony was enacted before a series of imperial statues, perhaps even in some contexts the same emperors featured on the coinage (Ando 2000, 209). The message Decius hoped to deliver is clear. Here were a group of exceptional, and deified, emperors who moved the empire forward. He would be the next in the ‘canon’ of greats and a citizen of Rome was secure under his rule.

Moreover Decius was emphasising the power of the emperor. On his later coinage various Roman mainstays are depicted, but divine figures are almost entirely absent (Mattingly 1924). By presenting his predecessors as essential figures in Roman religion, to the detriment of the traditional pantheon, Decius promoted his office as something quasi-divine and by association raised himself above the concerns of petty mortals. If successful this public relations initiative could only have increased his authority and hold on an increasingly fractious state. It was also something of a change from the policy of his immediate predecessor who, as discussed in last month’s blog, was sympathetic to Christianity – a religious creed incompatible with the Imperial Cult.

So what kind of an impact did Decius’ Divi have? Whilst we cannot be sure we can be confident that his coinage was well known by later Romans. Gregory of Tours, a sixth century historian and bishop tells us that seven young Christians (and their dog) fled to a cave to escape persecution for refusing Decius’ edict to sacrifice to the pagan gods (Lane-Fox 1986, 450, 490). Naturally they then fell asleep for nigh on two centuries, awakening in the Christian empire of Theodosius II. When one of their number left cave to buy food the coinage he used was immediately recognised as from the time of Decius (Ando 2000, 227), which provoked wonder amongst the town’s folk – wonder presumably compounded when the sleepers all promptly fell dead (Gregory of Tours, Passio septem dormientium 7-8). Whilst the story itself isn’t terribly believable it likely grew in the telling from events that truly happened. It is not so hard to imagine Christians fleeing rather than submitting to the emperor’s edict, indeed reactions to said edict were a subject of much later controversy within the church (Lane-Fox 1986, 550). Moreover if those Christians were to have fled with any money it doesn’t seem beyond the realms of possibility that the emperor’s newest coinage would have featured prominently in their collections. If a cache of their belongings were later discovered and spent there would have been a sufficient framework for the myth to have grown. Whilst there’s a fair amount of conjecture there I like to think that Decius’ Divi were still being recognised two centuries after his death and were being talked about by even later historians.

This month’s coin entry was written by Ben Howarth. Ben is about to begin an MA in the Department of Classics and Ancient History at Warwick. He has an interest in the development of Christianity in the Roman Empire and his undergraduate dissertation was on the persecutions of ‘others’ by Christians in the late 4th and early 5th centuries – an interest he hopes to develop further during his MA.