Whilst the interest in token moulds has mostly been confined to excavation reports and occasional enquiries to date, recent scholarship is increasingly focusing on the value of these objects to better understand crucial aspects related to the manufacturing techniques, production location and use of tokens in antiquity (cf. Pardini et al. 2016; Rowan 2019). Lately, token moulds are also gaining attention on the market and in auction sales.

Two unpublished token moulds are presented below, which exist as part of two museum collections from Florence, Italy. Both token moulds are discussed in a study currently being undertaken by the author.

The token mould shown on Fig. 1 is held in the Museo Archeologico of Firenze (MAF) (inv. no. 79209). It is one half of a mould made of limestone, rectangular in shape, whose size is 115 x 80 x 27 mm. It would have been used in conjunction with the other half (now lost) in order to create 8 circular tokens of about 16-17mm in diameter.

Based on the designs engraved on the surface – but some of them are unfortunately in poor condition – the resulting tokens carried at least three different types of images: on the left side, two of the preserved designs show Mars, helmeted, in military dress, standing right, holding spear in right hand and resting left on shield on ground (the type is also applied to Minerva, who is generally portrayed with a longer robe); on the top, two token cavities depict Mars helmeted, in military dress, standing right, holding spear in right hand and patera in left hand; in the lower right corner, a token design shows Hercules standing right, holding scyphum in left hand and club in right hand. These images are variants of types commonly depicted on Roman lead tokens, as already known through the examples published by M. Rostowzew as well as on individual catalogues of museum collections (for some of the types in question, see e.g. Rostowzew and Prou 1900, 135, fig. 32; Arzone and Marinello 2019, nos. 108-111 and 113). It is noteworthy that the first of the two images of Mars mentioned above appears on the tokens produced at the time of Nero, and was adopted on official coinage just afterwards, occurring on the coins issued during the Civil Wars of AD 68-69 (Fig. 2). However, the designs attested on the MAF mould are closer to the variant of a Mars type largely found on coinage from the time of Trajan (Fig. 3) up to the fourth century, which allows us at least to date the token mould to this broad time frame. To support this, morphological and stylistic features, as well as the material used, are consistent with the token molds from Rome and Ostia, generally assigned to the period between the 1st and 3rd centuries AD. 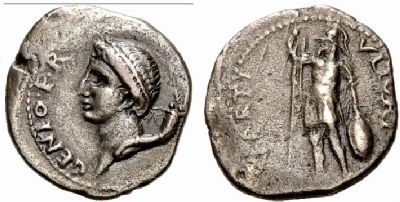 This token mould is said to have been found in Corneto Tarquinia (Lazio), whose ancient site was one of the most important settlements of the twelve Etruscan cities (the ‘Dodecapolis’), and which was under Roman domination since the third century BC. This place does not appear among the sites documented as find spots of token moulds to date, which have been found in Rome and Ostia, except for two examples from Como and Telesia (Rowan 2019, 98-99). If one accepts as reliable the information on its place of discovery, this mould specimen might suggest that a local production of lead tokens existed in Tarquinia in the imperial period. Moreover, it has recently been assumed that a ‘distributed production’ rather than a centralized single workshop was the common ‘model’ for the manufacture of tokens over the Roman period, which would have been created ‘in multiple places by multiple individuals’ (cf. Rowan 2019, 97).

This piece was sold to the MAF on 10 May 1901 by the collector and member of the Accademia Colombaria Anton Domenico Pierrugues, who donated his collection of Greek and Roman coins to the museum after his death (1915).

Fig. 4 illustrates one half of a token mould housed at Casa Buonarroti, whose collection was formed from the 16th to the 19th century from the bequest of Michelangelo Buonarroti and his descendants. The piece is made of limestone, quadrangular in shape, and is 83 x 76 (min. 73) x 28 mm in size. The other half of the artefact is lost also in this case. The mould would have created seven circular tokens of 14-15 mm in diameter, which were decorated with the image of the Three Graces on one side. This depiction is a popular type on Roman lead tokens. A bronze uniface Roman token (14mm, 2.90g) showing the Three Graces on one side while blank on the other side exists as part of the Casa Buonarroti collection. The iconography and size of this token perfectly match the token cavities of the mould, making it likely that the bronze tessera was cast through the mould in question (Figs. 5-6). Anyway, it is likely that this bronze token was a product of a sample casting from the mould after its discovery. This might be suggested by the absence of remains of casting sprues on the token specimen as well as by its uniface appearance, since it is highly probable that the other half of the mould containing casting branches to the cavities was also decorated (see below). However, no data is available about the place of discovery of the mould, and it is not possible to determine when precisely in modern times the tessera was cast.

The mould has a remarkable resemblance to a token mould of palombino marble with the same designs (105 x 75 mm for 7 circular tokens of ca. 17 mm) published by Cesano (1904, 11, fig. 1), which was found in the 19th century in Rome during the Lungotevere works. Such close ties might hint that the Casa Buonarroti mould came from Rome. According to ongoing research by the author, the mould may have been part of the inheritance of the antiquarian and senator Filippo Buonarroti (1661-1733), the great-grandnephew of Michelangelo Buonarroti, who stayed in Rome over the years ca. 1684-1699 serving as secretary, conservator of collections and librarian of the influential family of Cardinal Gasparo di Carpegna. In Rome, Filippo Buonarroti led a number of archaeological explorations which allowed him not only to assemble an impressive collection of Roman and Etruscan antiquities, but also to conduct pioneering studies in ancient iconography, epigraphy, and numismatics.

Figs. 7-8: Top and bottom sides of the mould from Casa Buonarroti, Florence.

Both token moulds show morphological and technical features which are largely documented for this class of objects. The extant half of the MAF mould shows a ‘herringbone’ arrangement, with a central casting channel with branches leading to the individual token moulds. The piece from Casa Buonarroti has instead only a central casting channel and no ‘branches’; one should assume that the now lost other half of the mould contained the channels through which molten lead was poured into the token cavities. In the top right and lower left corners, both molds bear the holes of the nails which were used to fasten both halves of the mould together, but also to ensure that they were correctly aligned (cf. Rowan 2019, 95). Furthermore, all four sides of the token mould from Casa Buonarroti carry small grooves which, as has been argued, would be suggestive of the use of wire which wrapped around the molds during the casting process (cf. Pardini et al. 2016) (Figs. 7-8). Also, as with a token mould from the Harvard Art Museums discussed by Rowan, a deep central hole is found in the center of each token cavity of the Casa Buonarroti mould, being visible in the guise of a protuberance on the body of one of the Graces in the resulting token, as is attested on the extant bronze tessera from Casa Buonarroti. This depression would be a clue of the method employed for engraving the token designs, since it would have been caused by the bit of a tool used for cutting the circular depressions before the designs were engraved. Finally, the back of both mold specimens is unworked, as attested on many moulds of this type.

Further analysis and the potential discovery of new specimens could help develop future discussion on the ancient token moulds, thus providing a more complete picture about the production and use of tokens in the ancient world.